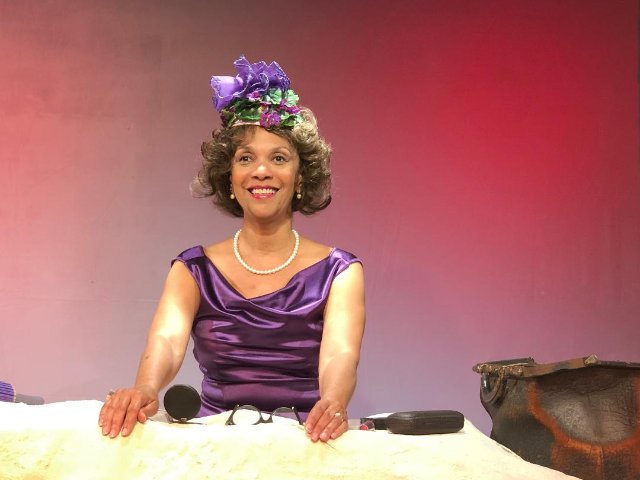 Photo by Nicole Stodard Winnie (Karen Stephens) is all smiles despite her living situation. 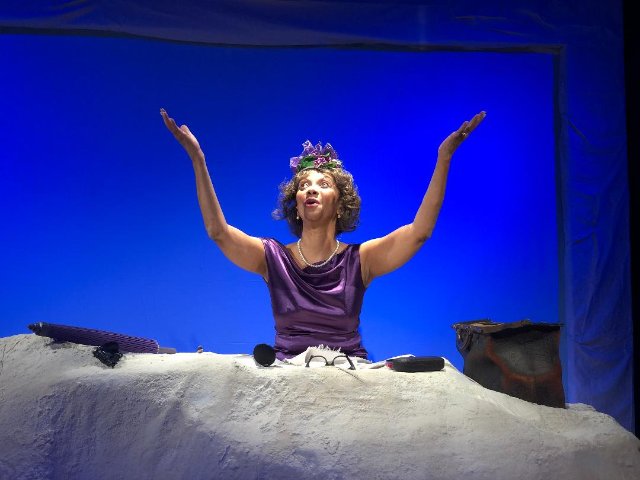 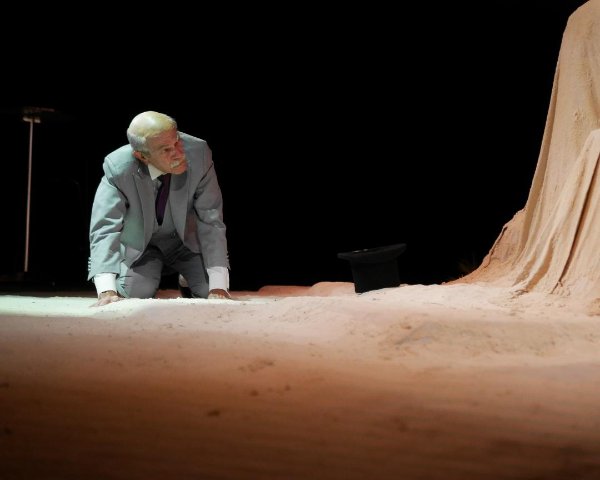 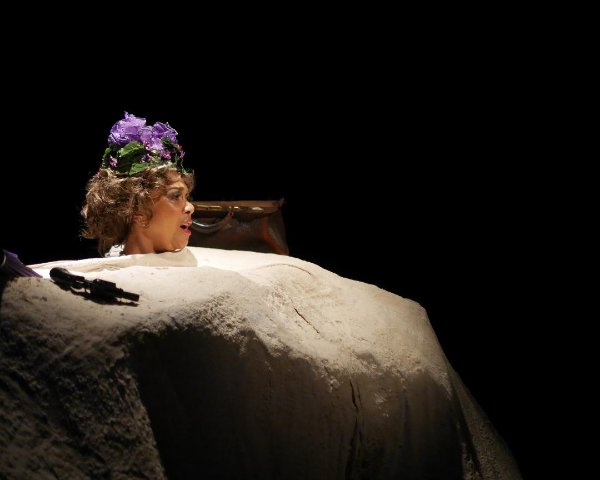 Photo by Cindy K. Shaw Winnie is perturbed as she is now buried up to her neck.

A man with much physical difficulty tries to reach the love of his life.

Naturally, she seems overjoyed that hubby is approaching. And so, she cheers him on. Surely, he wants to make love to her. Or, at the very least, share a long, passionate kiss.

And so, with all the might he can muster, he reaches out his arm. He fully extends it in her direction and leans his body toward her. But he can’t…quite…reach her.

It all sounds like a touching Valentine’s Day human interest story, but nothing out of the ordinary.

However, for some odd reason, the woman is constantly buried up to her neck with earth. No, her husband is not responsible. And neither of them do anything to change her living situation.

As for her husband, he seems quite content with his living quarters. He resides in a hole not far from the mound which eventually buries his wife up to her neck.

It’s a question many have asked about the action suffusing Samuel Beckett's plays.

The 1953 tragicomic Waiting for Godot is among Beckett’s more familiar and frequently-produced plays. However, audiences may not be as acquainted with his 1961 existentialist and absurdist piece, Happy Days.

But at least in South Florida, audiences may soon become familiar with Happy Days. That's because Thinking Cap Theatre, a professional company in Ft. Lauderdale, is staging a superb production. It runs through March 1 at the Vanguard Sanctuary for the Arts.

Many have racked their brains trying to uncover meaning in Beckett’s plays. Yet, for some, that process has proven as difficult as Happy Days protagonist Winnie trying to free herself from the seemingly immovable, mysterious mound. It traps her into a disappointing life devoid of purpose or meaning.

Yet, even as Beckett’s works resist answers as to their meaning, critics and audiences have nevertheless pushed ahead. Fortunately, they have unearthed relatable themes.

Specifically, in the plotless Happy Days, such themes include the need for human connection, purpose, feelings of usefulness, and reasons to remain positive despite disappointments.

In Winnie’s case, she sinks farther and farther into the sands of despair and fleeting time.

While this woman often feels helpless and hopeless, such feelings are also fleeting. No matter how far she sinks, the character proves resilient. For instance, she passes time and derives satisfaction from quoting the classics, engaging in vaudeville-like rituals (similar to Godot), reaching into her bag for life’s essentials and pondering ideas.

Winnie finds joy in life's “small” pleasures. You know, the ones which can easily escape notice. Undoubtedly, Thornton Wilder would be proud of Winnie for recognizing that these seemingly insignificant moments amount to “Happy Days.”

And Thinking Cap Theatre has ample reasons to feel proud. The production values, behind-the-scenes and on-stage, are first rate.

As Winnie, veteran south Florida actress Karen Stephens imbues each pause, word and expression with impressive spontaneity. Words tumble from Stephens’ mouth with a freshness that makes you feel she’s saying them for the first time. Clearly, the performer has sunk into the character as easy as someone sinks into a deep sleep with the aid of a powerful anesthetic.

Meanwhile, Winnie’s body shakes with determination, goes limp with despair, tenses up in anger, enlivens with joy and her head tilts sideways and upwards in deep thought.

Also, with seeming effortlessness, Stephens modulates her voice to express a variety of emotions.

Surely, many actresses must covet this role just as male performers long to play Hamlet.

Winnie is a challenging role that requires a performer to seamlessly and quickly change emotions. The character basically performs one long monologue throughout the play’s 90 or so minutes. Furthermore, when Winnie is buried up to her neck, an actress playing her cannot use her arms and hands to gesture. The performer's only means of expression are her voice and face.

The performer knows just how long to pause to achieve a desired effect. Also, Stephens demonstrates a chameleon-like ability to rapidly, yet smoothly transition from one emotion, expression and action to another. In addition, the actor demonstrates deft comic timing. In particular, she achieves just the right dry, self-deprecating tone.

Stephens last impressed local audiences and critics during her strong performance as a frustrated, helpless mother in Zoetic Stage’s production of American Son. It’s a realistic play and thus a polar opposite of Happy Days. And Stephens has proven her versatility by shining in both.

To be sure, Willy doesn’t speak nearly as often as Winnie. Nor does he appear frequently in front of us. Often, we merely see his head. Even so, an actor portraying him must respond to Winnie’s constant chatter in a timely manner. Also, a performer needs to know just when to produce sound effects in response to Winnie’s words. Thinking Cap Theatre veteran performer Jim Gibbons proves up to the task.

He speaks in a gruff voice. It serves as a nice counter to Winnie yelling at him. She does so like a wife who loves her husband, but knows him and his annoying eccentricities so well that she can’t help but release frustration.

Gibbons saves his best work for the end. That’s when Willy crawls on all fours in his wife’s direction. He moves deliberately, as though the aging process has slowed him down considerably.

Although the play calls for some movement, the actors are mostly stationary. It can be easy for them to become "talking heads." But director Nicole Stodard and the actors ensure there's enough variety in the performers' gestures and speech patterns to keep the action interesting.

Certainly, many people these days must feel like they are buried under the weight of the world’s problems and their burdens. Further, if they don’t remain positive and find things to do, all that weight will crush them. In essence, they’ll be “buried alive,” like Winnie.

As a team, everybody involved with this production admiringly fulfills their responsibilities. All elements gel. As a result, the actors and behind-the-scenes personnel breathe vibrant life into Happy Days.

Stodard, Thinking Cap’s founding artistic director, wisely doesn’t include an intermission. A break in the action would interrupt the 90-minute play’s flow. Further, Stodard has obviously helped the performers achieve the right balance between pathos and comedy. Sure, Winnie, sporting a tall, purple flower-adorned head decoration, often seems like an eccentric. Yet, the director and Stephens ensure the character doesn’t become a caricature.

Also, Stodard honors the pauses in Beckett’s script, while not allowing the production to drag.

Scenery wise, Beckett’s script calls for a mound of earth. But in Thinking Cap’s production, the set resembles a sand castle or fort. Apparently, the theater’s south Florida location near the beach influenced Alyiece Moretto-Watkins’ scenic design. With the help of a screen projecting an image of a blue sky with clouds, as well as appropriate lighting hues, the stage resembles a sunny day at the beach during the play’s brighter moments.

In Thinking Cap Theatre’s intimate playing space, the production feels more visceral than if it were to play in a large auditorium.

While Happy Days might be a lesser-known and produced piece, it’s a play that audiences can interpret in many ways.

No doubt, even if the play feels tiresome at times due to the lack of action, you're likely to unearth some meaning of value in Happy Days.

Thinking Cap Theatre's production of Happy Days continues through March 1 at the Vanguard Sanctuary for the Arts, 1501 S. Andrews Ave. in Ft. Lauderdale. Tickets cost $35 and showtimes are at 8 p.m. Thursday through Saturday as well as 3 p.m. Sunday. Call (954) 610-7263 or visit https://www.brownpapertickets.com/event/4461842.