Nadine Sierra at the Park Avenue Armory with Bryan Wagorn 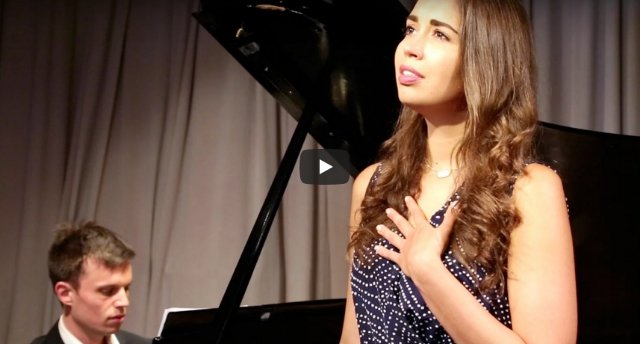 Wagorn and Sierra, a dynamic duo. 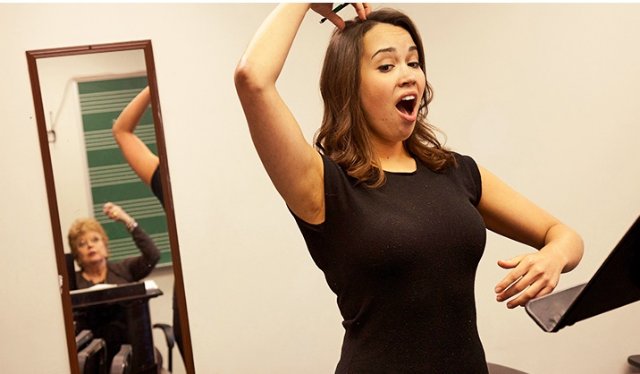 Nadine Sierra has won the prestigious Marilyn Horne Foundation Vocal Competition and recently the Richard Tucker Award. It is said she will soon become a fixture on the international music stage. She certainly fits in with the beautiful, warm fixtures of the Officers’ Room at the Park Avenue Armory.

As Sierra sweeps onto the raised stage platform in form-fitting orange chiffon, clouds of orange trail behind her. An inviting figure, her hair is drawn back softly from her face. The hype around her concerns many elements. Her style, glamour and personal warmth. Yet it is the voice which exceeds all expectations.

Marilyn Horne, in attendance at the concert, made it very clear that her teacher César Ulloa has been instrumental in her development.  Horne also noted that Sierra started early for a singer, and this is one of the reasons she has arrived at such heights at a young age.

Although her family is billed as non-musical, and Sierra hints that her father doesn’t like opera, she talks touchingly of a Portuguese grandmother who had a beautiful voice. She wanted to study voice, but her father forbade this. She was to get married.

In some ways, Sierra finds herself fulfilling her grandmother’s dream. Her own mother may have encouraged her to pursue her bliss, because she came from a family where women's talents were left to languish. Sierra is making up for past transgressions with verve and a sense of mission.

What emerges in the voice is surely a God-given musicality, which may have skipped a generation in her family’s genes. The way Sierra listens to sound in the Armory air, holds a note just the right length, not counting, but hearing, is simply musical.

Sierra is fortunate to have Bryan Wagorn at the piano. They studied together at the Mannes School of Music and have been friends for the past 11 years. Wagorn matches the texture and shaping of Sierra’s voice in his interpretation. The lid of the piano is up full mast. The Sierra voice is easily heard with the accompaniment. She has a large voice indeed, although she has thus far resisted roles like Manon and Traviata because they demand too much voice. She is a smart singer too.

As you listen to the beautiful Richard Strauss songs, you think of his soprano wife Pauline. Had she allowed her husband to play cards all day long, we would not have had these ravishing harmonies and the agonizingly lovely intervals in phrases. They make you ache as you listen to Sierra sing.  Sierra is not just a lovely voice, she is full of feeling and expresses deep emotion.

Yet she can have fun and be playful. In the second part of the program she sang New Mill, which is almost scat. The words might as well have been “How much wood could a woodchuck chuck,” she laughed.

Her arms move gracefully. It’s fun to watch her sigh at the end of a song, remarking on its beauty with a little breath accent.

Breath is where the singer’s technique stands out. She is in absolute control. If she wants to use it as a dynamic device she can breathe into a note. She plans a phrase so that she can hold a final note to squeeze all of its texture into the air.

Sierra sang O Mio Babbino Caro for her father, who could see his own paternal role in the aria. Most specially, she sang Stephen Foster's Beautiful Dreamer for Marilyn Horne. No one who has heard Horne perform Foster will ever forget it.  This afternoon reminds us of the continuing importance of song and the human voice in our lives.