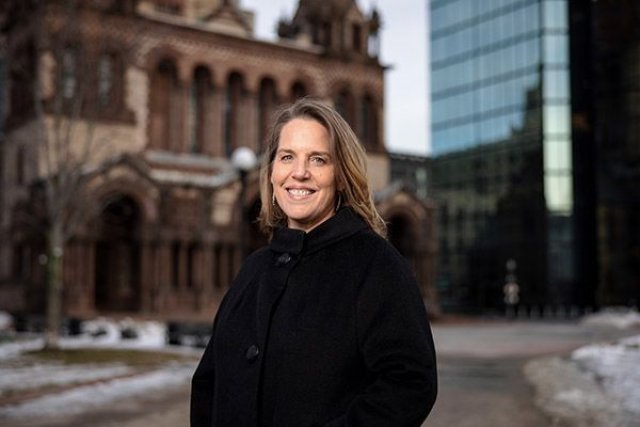 The Boston Symphony Orchestra (BSO)  announces the appointment of accomplished orchestral music executive Gail Samuel as the institution’s next President and Chief Executive Officer. Upon her formal appointment on June 21, 2021, Samuel will serve as the organization’s first female president and the eighth in its storied 140-year history.

As the Julian and Eunice Cohen President and CEO of the BSO, Samuel will lead the Symphony Orchestra, the Boston Pops, and Tanglewood, and will oversee a robust, rapidly evolving slate of initiatives intended to expand the reach and relevance of orchestral music in the Boston area and beyond.

Currently President of the Hollywood Bowl and Chief Operating Officer of the Los Angeles Philharmonic, Samuel holds three decades of experience in orchestra management. She will join the BSO after providing 25 years of senior leadership to the LA Phil, concluding a successful tenure that produced record financial growth, thriving community partnerships, and a number of groundbreaking programs and performance spaces widely considered the industry "gold standard."

Hostetter continued, "Gail is the rare leader who meets and exceeds all of these requirements. She holds an innate love and appreciation for music and how it is presented, as well as a deep understanding of the orchestral art form. As an accomplished orchestra executive, she is well-versed in the particulars of strategic management, from marketing, audience development, revenue growth and fundraising to meaningful community engagement. Her understanding of classical music, business, and most importantly, the critical intersection of the two, is impressive, and we look forward to her skilled stewardship of the BSO."

An accomplished classical music executive with deep orchestral knowledge, Samuel is widely recognized for her collaborative relationships with musicians, keen business acumen, and creative vision for new partnerships and programs.

While at the LA Phil, Samuel held the role of COO for close to a decade during the tenure of legendary music director Gustavo Dudamel, and in partnership, maintained the largest operating budget of any orchestra in the country, recruited a diverse staff representative of the greater Los Angeles community, and supported the work of Dudamel’s acclaimed YOLA (Youth Orchestra Los Angeles) program.

She is credited for transforming and expanding the reach of the Hollywood Bowl, the iconic music venue that serves as the summer home for the LA Phil, and is a popular arts destination for the Southern California community. She also steered all strategic and operational development for the organization’s highly celebrated venue, the iconic Walt Disney Concert Hall. In recent years, she worked with the County of Los Angeles to bring another historic outdoor amphitheater, the Ford, under the stewardship of the LA Phil, with the specific mission and vision to celebrate and support the broad and diverse community of artists in Los Angeles and their audiences.

"There is no better place than the Los Angeles Philharmonic to understand the sophisticated inner workings of a musical organization centered around a symphony orchestra, and I will forever be grateful for the lasting relationships and the experience afforded me at the LA Phil," said Samuel. "The opportunity now to lead one of the world’s best orchestras, in a rapidly changing metropolitan area such as Boston, is an exciting new challenge and a dream project. The BSO’s assets are tremendous – from its phenomenal Orchestra, to the beloved Boston Pops, Symphony Hall and Tanglewood with the Tanglewood Music Center, and the new Tanglewood Learning Institute. I see endless opportunity and look forward to working with my colleagues and the Board of Trustees to explore new traditions while building on the strong foundation brilliantly established by Mark Volpe. I am deeply grateful to the BSO Board of Trustees for entrusting me with this honor."

Samuel began her career with the LA Phil in 1993 in the role of Orchestra Manager. She was promoted to General Manager in 1997, and in 2009, while still serving as General Manager, assumed an additional role as Vice President of Philharmonic and Production. In this added capacity, she oversaw every production element across the organization. Appointed COO in 2012, and Executive Director in 2015, she twice served as Acting President and CEO.

"Gail’s impact on the Los Angeles Philharmonic, and by extension, the Los Angeles arts community, was widespread and cannot be overstated," said Susan W. Paine, Chair, Board of Trustees. "Motivated by a true musician’s sensibility, Gail spearheaded the advancement of many of the Los Angeles Philharmonic’s now signature initiatives. She holds a sincere belief in the power and vitality of classical music, and the philosophy that cultural institutions carry a civic responsibility to serve their surrounding communities. The BSO shares these values, and we are eager to have Gail’s wisdom and expertise in Boston, particularly as we look to grow and engage with a changing Boston in new and exciting ways."

Samuel was selected following a rigorous, international search that began in April 2020. She was approved unanimously by a full Board vote upon receiving the unanimous recommendation by the Ad Hoc President and CEO Search Committee. She will succeed Mark Volpe, a recognized leader in the orchestra field who is stepping down after 23 years at the institution. Volpe will remain as President and CEO until June 20, 2021, to ensure a smooth transition. Volpe is credited for marshalling an era of exponential growth at the BSO, and under his devoted leadership, the organization flourished artistically and programmatically, significantly expanding its real estate and financial holdings, and sustaining a presence on both a national and international level.

"I am extremely excited to be welcoming Gail Samuel to our wonderful BSO Family, as our next President and CEO," said Andris Nelsons, the Ray and Maria Stata BSO Music Director. "With Gail’s arrival in June to start her tenure as the next BSO’s executive leader, we begin a new chapter in the orchestra’s celebrated 140-year history, and face these unprecedented times of change, challenge and opportunity with a renewed spirit of possibility. Following in the footsteps of Mark Volpe and the many esteemed BSO leaders before him, Gail will continue to build upon the orchestra’s extraordinary accomplishments and create a bright and exciting future that deeply resonates with the orchestra’s communities in Boston, the Berkshires, and throughout the world."

"Gail Samuel is one of the country’s most accomplished leaders in the world of music," said Mark Volpe, the Eunice and Julian Cohen BSO President and CEO. "I am pleased that Gail will guide the orchestra through its next chapter, post-pandemic, and I am certain she will inspire new ideas and thinking that will ensure the BSO continues to flourish by bringing its extraordinary gifts to the widest possible audiences for many years to come. The Boston Symphony Orchestra’s legacy of achievements, built upon decades of dedication by its musicians, boards, staff, and management, represents commitment to the highest standards of institutional excellence. The Boston Symphony Orchestra is certain to continue to thrive and prosper under Gail Samuel."

Raised in a family of musicians, Samuel studied violin and earned undergraduate degrees in music and psychology and a master’s degree of business administration from the University of Southern California. She serves on the Board of Councilors for the USC Thornton School of Music and on the Board of Directors of A Noise Within Theatre. "On behalf of the Board of Trustees, I extend my sincere thanks to the members of the Ad Hoc President and CEO Search Committee for their exhaustive insight and extreme diligence during this process," said Hostetter. "We were committed to conducting a robust and transparent search, and their efforts were essential in achieving our goal and securing a bright future for the BSO."