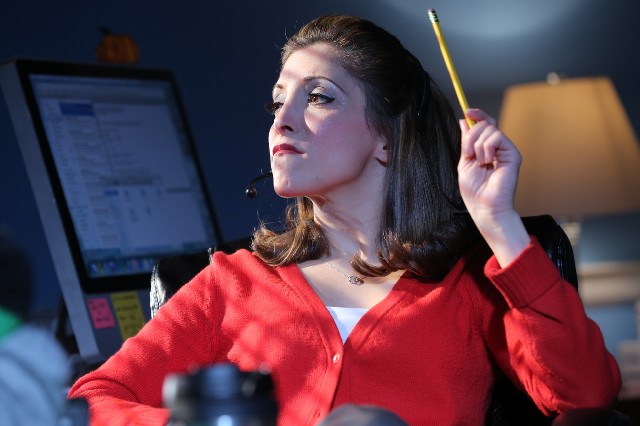 It took me 15 minutes watching Application Pending to adjust to Christina Bianco’s electrifying, over-the-top performance. Between her ‘faster than a speeding bullet’ character changes, each with their own voice and mannerisms, and a surprisingly intelligent script that skewers just about everything and everybody in the most non-PC way, I had to reprogram my brain to take it all in. If I didn’t my head would have exploded with all of the different personalities and hot-button subjects being fired from the stage.

For 75 riveting minutes and 42 characters – most of who make several character building appearances throughout the show – the writers Andy Sandberg (also the director) and Greg Edwards leave no topic unsullied, as they bombard the audience with more than a whiff of sex scandals, politics, race relations, child-rearing, homosexuality, transgender, the entitled rich, the put upon poor, to liars, cheats, and a terrorist on the run, all inhabited by a rich array of weirdoes and oddballs.

The overall plot is simple. The director of the Pre-Primary Admissions at Edgely Preparatory Academy, an elite Manhattan school for the rich, has mysteriously disappeared and Christine Evans, (Christina Bianco) a lowly assistant to a kindergarten teacher at the academy is pulled from class and appointed by the school’s director to fill this position. To add insult to injury, it is the last day for applications to be accepted and the telephone, each with a different parent, child, or academy employee requesting information, as well as favors, is ringing off the hook.

While the overall plot may be simple, the sheer number of mindboggling twists and turns in each character’s story, and the script’s countless plays on words and double-entendres, both subtle and in your face – you really have to pay close attention so as not to miss anything – is anything but.

And that’s when the hilarity begins, as each outrageous individual, all brilliantly channeled by Bianco, try everything in their power, including bribery, bragging, threats, gifts, and outright lies, to get their child’s application both approved and in under the deadline.

Half out of her mind, Christine, in a job she doesn’t want, fields countless calls from nervous and irate parents of the applicants, as well as from a Russian businessman, a Senator of South Carolina, agents from the Department of Homeland Security, Federal Bureau of Investigation, and Drug Enforcement Agency, and an executive of PETA.

An especially mysterious and nasty rival, Vera Vandercooché, Chancellor of Admissions at Buckington Academy, who wants to do Christine in, is one of the most intriguing callers. Thrown into the mix are George Clooney, Celine Dion, her ex-husband Richard, Devin her preschool-age son, and His Holiness the Pope.

While I never saw Christina Bianco perform before this seeing this play somehow her name was familiar to me. Maybe I saw her name mentioned on YouTube, as her many mini-characterizations, so says her Bio in Playbill, have racked up some 20 million hits. Or I could have read about her appearances on “The Ellen Degeneres Show” and “The Queen Latifah Show.” Bianco did star Off-Broadway in Newsical the Musical and Forbidden Broadway Goes To Rehab for which she was nominated for a Drama Desk Award. Sadly, I missed both of those productions.

While writing this review I did decide to check out Bianco’s YouTube appearances, a few of which I posted for your enjoyment below. The big surprise is she that the gal has an amazing set of pipes that seem to be able to channel every singer and actress born, from Piaf, Monroe, Midler, Judy, Liza, Adele, Cher…you name and she does it.

I am hoping that her next move will be a star-turn in a newly penned full length play where she gets to be one self instead of many. I wouldn’t be surprised if this is already in the works.

Ladies In The Movies