An Act of GOD at LA's Ahmanson Theatre 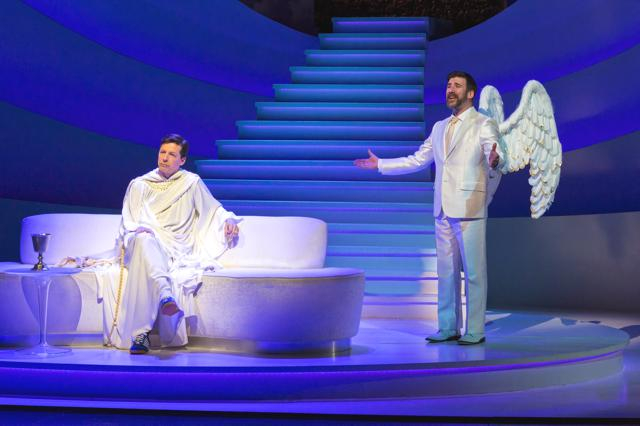 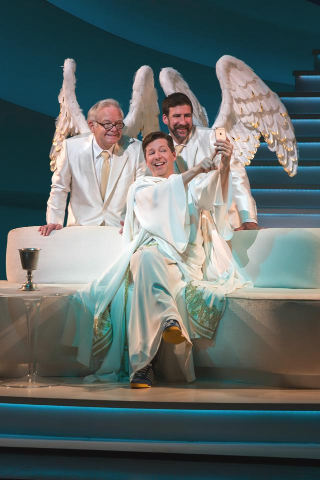 It isn’t easy being GOD these days. He’s dealing with a lot of blow-back from his children. The natives who have been reluctantly obedient off and on over the millennia are restless again. They’re in one of their ‘we want straight answers this time’ moods.

When GOD, the bearer of good or bad news, makes one of his rare appearances to his earth-bound children, he wisely chooses comedy as the medium of communication. The pain of hearing the truth is mercifully muted by audience laughter in his visit to the Ahmanson Theatre’s current production.

“An Act of GOD”, written by David Javerbaum, former head comedy writer of “The Daily Show with Jon Stewart”, is a clever and smartly directed comedy by Broadway veteran Joe Mantello, and is a perfect fit for the talent of its star Sean Hayes.

Hayes cut his comedy chops on the popular TV series “Will & Grace”. This time, however, Hayes playing GOD naturally gets top billing. He has the Ahmanson stage all to himself. The only exceptions are his two favorite angels – Gabriel, played by James Gleason, and Michael, played by David Josefsberg, who are there to assist when needed.

But there is no doubt as to who the stage belongs to in this 21st century Biblical recitation on the Commandments. This time, stentorian-styled delivery is replaced with a laid-back GOD figure who dispenses his re-explanations while reclining on a large, elevated, white sofa, spiced with the vernacular of today. His dialogue with the audience has bite and comedy-style worthy of some of today’s best stand-up comedians.

As a cautionary note: One should be prepared to hear the content of the commandments explained by Hayes to be not quite as verbatim as you remember when you were learning how to conduct yourself under the rules of a polite and civilized society. Thanks to Javerbaum’s script, the production is replete with topical references to Donald Trump, Sarah Palin, and the 2016 Presidential Debates. GOD’s chit-chat monologues to the audience sound a little odd coming from the Big Kahuna, but it is after all a comedy.

Style and delivery are the virtues of this production. Content reveals that no new ground is being broken here from director Montello and Javerbaum except to have the Biblical commandments re-explained for millennials in the vernacular they so enjoy. I found the show, which is performed without an intermission, to be an amusing comedy, yes, but not what the New York critics and hype claimed it to be.

Don’t get me wrong. I enjoyed Sean Hayes’ winning performance. If one judges by audience reaction and involvement, then the opening night audience loved it. On exiting the theatre I had a chance to ask two middle-aged women if they liked the show. “Yes. It was very funny and entertaining” they said. Pressing the issue, I then asked would you say that more women were laughing than men? Both replied, “I think it was about 50-50”. I estimate the divide to be more like 70 female, 30 male. Alas, the battle of the sexes apparently still rages. For me, I’m afraid, it’s a bit like pouring old wine into a new bottle.

The Ahmanson Theatre is a large venue: 2000 seats. For a three character play, the players can get swallowed up the vastness of the house and stage space. Perhaps, a smaller performance space like the Taper would have been a better fit.