Black No More at the New Group 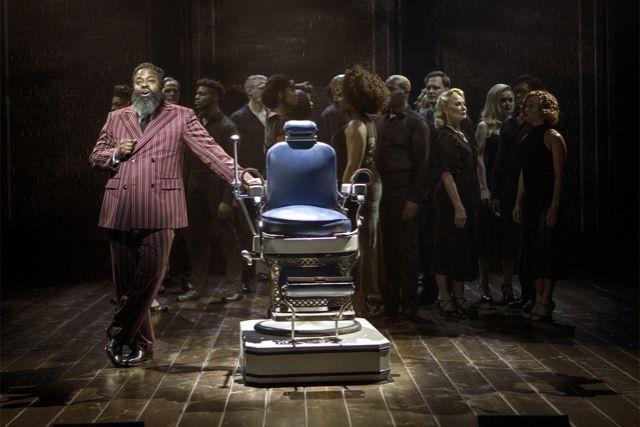 Black No More presented by The New Group

Black No More is packed with A list creative talent. Now in a limited run produced by the New Group, it should be headed for Broadway.

The book’s creators wondered whether rap would work for a serious story. Andy Blankenbeuler (Lian Manuel Miranda’s dance man) learned to tell a story in movement from Bill T. Jones, the choreographer of this show. The image of a group of figures bent flat at the waist looking like they are ready to pick cotton lingers. Gestures arise from all body parts. Grace comes from yoga postures as well as classical ballet poses. Jones’ gift is to find the gesture for the moment and advance the story. We learned in his opera, We Shall Not be Moved, that story telling is his strong suit.

Creators were concerned that rap recitative, which is the work's basic form of verbal communication, would not well serve a serious tale. They were persuaded by arguments about Hamilton’s success. Director Scott Elliott has threaded complex pieces into a simmering whole.

We can go back further to Toni Morrison’s first published story, Recitatif. Récitatif is a style of musical declamation that hovers between song and ordinary speech. The term is also used for the tone or rhythm peculiar to any language. Morrison's story brings together the rhythms of two lives, narrated by Twyla in 'recitative." Recitatif is a story in racial writing. The characters are clearly separated by class. Neither is identified as Black or white. Morrison has described the story as "the removal of all racial codes from a narrative about two characters of different races for whom racial identity is crucial."

Black No More is based on a book by George S. Schuyler written in the 1930s. Schuyler was black. He married a white Texan heiress. He didn’t care for either Blacks or whites or yellow people. He poked fun at all racial attitudes. Deflection and humor may be useful tools for handling the pain of discrimination. This posture works well in the musical.

On stage, we are introduced to white visitors at an uptown club. The Harlem beat was what they wanted. The consequences of this trip unfold through the drama.

Derek McLane has given outlines of a world, with captivating large letters announcing location and tall towers with lights separating exits and entrances,  rooms and railroad stations. He created the MJ set. This production has the same vigor and dynamism of MJ, drawing the audience in.  Educating and entertaining at the same time.

A Black doctor has a new medicine to turn Blacks white in three days. It becomes the rage in Harlem. Max Disher is the subject of its initial clinical trial. While his neightbors can tell exactly who he is, people who don’t know him can’t. (The recent film Passing dealt with the subject of passing without dying.)

Disher, in a monumental performance by. Brandon Victor Dixon, decides to go to Atlanta and see if he really is white now. As Matthew Fisher he is identified as white by Nordica, a Klan-like group. Without a moment's hesitation he is made its head.

Lillias White, from Grizabella in Cats to Sonja in The Life, is Black performance incarnate. Here she is Madame Sisseretta, making her living straightening hair in Harlem.

Tamika Lawrence is Bunni Brown. She ranges from the sweetness of seduction to the wails of pain and betrayal.

The ensemble group is terrific. The dancers' fluid gender identification may suggest the future of American skin color. I for one would choose the color of Vanessa Williams.

John Ridley, Academy Award winner for the screenplay of  12 Years a Slave, is responsible for the book. His portrait of seven days when two Blacks ruled America reflects his stance on Black issues.“Dr. Condi and Colin personify what niggers have forgotten: All that matters is accomplishment. The very pinnacle of ascendancy is the ability to live and work without regard for the sentiments of others and with, as Sister Rand would tell us, a selfish virtue."  (continued as an addendum to this article).

Where do we go from here?

Surely not Black No More, although the tough tale is a start.  Love as a solution to racism seems a bit soft at the play's  conclusion. Yet making a point about how skin color impacts on a human’s potential is a powerful message, often not discussed. With wonderful black theater around, it is good to have skin in the game.

How does a white person respond?  I have always felt as a woman that I got a small taste of instant rejection when I walked into a meeting room and white men’s eyes registered surprise and not much pleasure.  The tribal affiliations of white men, so brilliantly detailed by Lionel Tiger, were disturbed. How much more intense and difficult this must be for a Black person. Are we able to elicit empathy?  Ummm.

The subject of skin color in our discussion of race is very important. Jordan Peale touched on it in Get Out. Grace Halsell, a white journalist, turned herself dark and spent six months in the South in the 1960s. I studied writing with Anatole Broyard, who was passing as white at the time. Only after he died was his Black heritage revealed.

"This, then, is my directive: Let us achieve with equal disregard for the limitations of racism and the weight of those of us who threaten to drag all of us down with the clinging nature of their eternal victimization. Our preservation is too essential to be stunted by those unwilling to advance. And in my heart I don't believe all blacks cannot achieve in the absence of aid any more than I believe the best way to teach a child to run is by forcing him to spend a lifetime on his knees.

"As long as we remain committed to holding high our individuals of supreme finish, others will be inspired to loose themselves of the gravity of the waywards and downtroddens.

Once free, they will rise. They will drift high toward the attainments of which we are invariably capable; being better fathers and husbands and lovers. Better mothers and daughters, sisters and best friends. We will rise to the simple obligation of taking care of our own with the same dedication we will give to improving our community and country and our world. Yes, our influence will extend so."