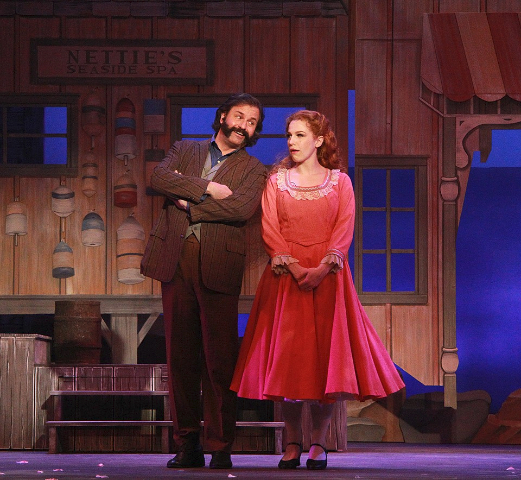 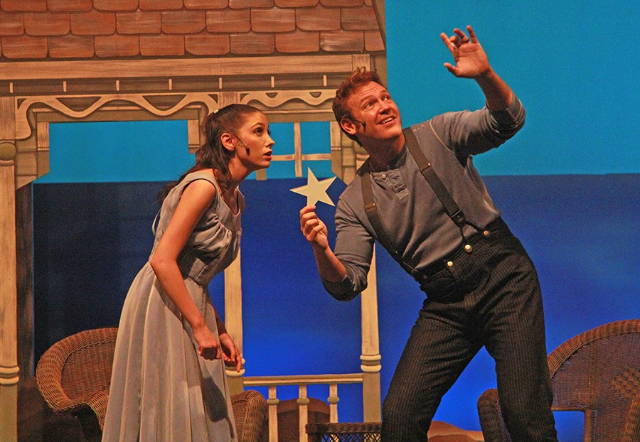 Many would argue that, in today’s troubled world, we especially need to hear the comforting song “You’ll Never Walk Alone.”

The moving, majestic, memorable melody is one of many Richard Rodgers' and Oscar Hammerstein II’s gems that stick in our mind and soul once we’ve heard it.

The song about weathering a dark and scary time is compassionately sung with dignity in Actors’ Playhouse at the Miracle Theatre’s first-rate production of “Carousel.”

On the Miracle Theatre’s stage through Sunday in Coral Gables, Fla., you’ll experience some of the strongest performances you’ll encounter this theater season in a near-flawless rendition of Rodgers and Hammerstein’s classic musical featuring triple threats.

Arisco and Co. transport us so fully to the New England coast of the late 1800s, (beautifully depicted through scenic designer Tim Bennet’s handsome, detailed sets) you’ll be as baffled as the characters if something called a “cell phone” rings.

Cast members inhabit their roles so fully, you’ll want to hop on-stage to comfort them and celebrate with them.

Part of the reason “Carousel” is a rich, winning musical is that it encompasses a near-full range of experiences, emotions and feelings we’re bound to experience – heartache, love, anger, anxiety, sadness, camaraderie, celebration and compassion, to name a few.

Many would argue that the latter is sorely lacking today, but it’s on heartfelt display in this production.

The sincere sympathy comes while mill worker Julie Jordan kneels at the corpse of carnival barker Billy Bigelow, who has died trying to provide money for his soon-to-be child, unborn in Jordan's womb.

It’s fitting, perhaps, that Jordan is played by an actress who shares the first name of her character. Julie Kleiner, who plays Jordan, becomes one with her character and remains so through the many emotions the mill worker experiences.

During the Bigelow death scene, Jordan is encouraged by respected village resident Nettie Fowler (a motherly, tender Lourelene Snedeker) to sing a song she’d learned in school: “You’ll Never Walk Alone.” Kleiner’s Jordan begins to sing it in a calm voice to comfort herself, but in a touching, convincing moment of palpable emotional pain, Kleiner chokes back tears and clenches her teeth in an effort to control herself – she’s trying to keep at bay emotions anyone who’s lost a loved one has experienced. It becomes clear Jordan cannot continue singing, but Fowler picks up where Jordan leave off, singing softly and with gentleness. She slowly builds in intensity before powerfully reaching the song’s crescendo.

There’s plenty of variety in “Carousel,” and Arisco puts equal emphasis on the musical’s many moods, which are reinforced by the expert lighting design of Eric Nelson. The designer also nicely contrasts the realistic with the fantastic.

This production treats “June is Bustin’ Out All Over” like the showstopper it is. Bright lights illuminate the stage, complemented by the cheery, upbeat voices of the cast. They are backed by a vibrant, live orchestra, which misses nary a note throughout the score.

As an ensemble, the actors expertly convey the sense of a small, tight-knit community through songs such as the campfire-like number “A Real Nice Clambake,” whose melody carries an air of quiet satisfaction, joy and serenity.

The actors sway while singing “Clambake” -- a wise directorial choice by Arisco; the swaying enhances the sense of communal togetherness.

Even the perhaps lesser-known song “Blow High, Blow Low” conveys a unity among like-minded people, in these cases individuals who love life on the water.

It’s hard to carp about this production, but a tug-of-war match takes place during this song. This seems at odds with the number’s sense of solidarity.

In Rodgers and Hammerstein fashion, “Carousel” tells the tale of a main, serious couple (Bigelow and Jordan) as well as a subplot featuring a secondary, more comic couple: Carrie Pipperidge (a dreamy Lauren Lukacek, especially during her rendition of “Mister Snow”) and Enoch Snow (an energetic, eccentric Mark Sanders.)

As is the case in “Oklahoma,” Rodgers and Hammerstein’s first collaboration before “Carousel,” there are extended, word-less dance sequences that tell the story as much as spoken or sung words.

Choreographer Ron Hutchins’ has helped performers vividly convey feelings, such as in the merriment of the prologue (“The Carousel Waltz”) when colorful characters emerge during the carnival. The musical and this production of it contains vibrant, creative dances, executed with verve here, as well as visual delights, including costume designer Ellis Tillman’s colorful character- and period-appropriate costumes.

But “Carousel” contains so much more than eye candy.

At its heart, “Carousel’s” the story of a man who largely failed in life. However, he receives a second chance to redeem himself after he dies.

There’s a primitive quality to Bigelow, a la “A Streetcar Named Desire’s” Stanley Kowalski. Still, we need to root for Bigelow and that’s a hard task if he comes across as a total brute.

The superb Michael Hunsaker, with a rangy, strong and expressive singing voice, finds the primitive side of Bigelow.

However, he also unearths the helplessness and vulnerability of the character, whom he also invests with a palpable sense of urgency. You get the feeling that under this Bigelow’s gruff exterior exists a soft-hearted, sensitive man who wants to do the right thing. However, his temper, impatience and impulsivity get in the way and proves his downfall. There's a kind of tragic Shakespearean quality in this man.

There’s plenty of frankness in “Carousel.” The ride itself symbolizes life. As life's circle continuously rotates, we experience pleasant and dark times. In those moments when light seems absent, songs such as “You’ll Never Walk Alone” try to remind us there’s light to guide us through our pain.

It’s not just at “the end of the tunnel.”