Garden of the Finzi-Continis

Book, Film and Now an Opera 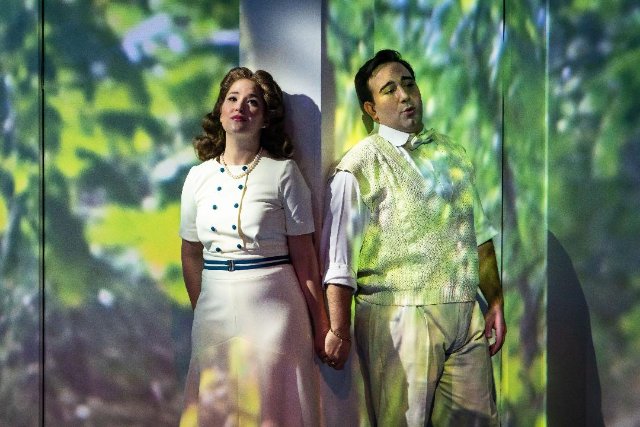 Rachel Blaustein, left, and Anthony Ciaramitaro as young Italian Jews on the cusp of World War II in “The Garden of the Finzi-Continis. (Photo by Steven Pisano) 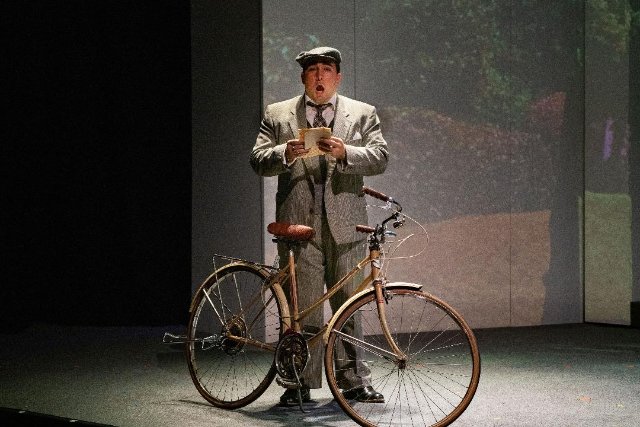 Despite countless closings, postponements, cancellations, empty seats, Covid interventions, and the annoying requirement of having to wear a mask, present proof of a vaccination with a valid government issued photo ID, and go through a security check, even before you enter the theatre, New York City’s theater scene appears to be chugging along, surprisingly so, with an abundance of better than- usual fare.

As for theatergoing audiences, they are ecstatic about being back in the house after having had no live theater for some 18 months. One need only to listen to the ear-splitting screaming and yelling when the lights go up at the beginning of each performance. It seems that all an actor has to do is come down stage, raise an eyebrow or two, and the audience goes bananas.

On the upside, the really good news, thanks to the Black Life Matters and Diversity Movements, from Pass Over, the first play to open on Broadway this past August, is that there has been a noticeable increase in black play productions and colorblind casting, both on and Off Broadway.

For a high visibility history-in-the making event one only need to look to Disney’s Phantom of the Opera which after 33 years playing on Broadway just cast Emillie Kouatchou, the very first Black actress in the lead role of Christine Daae. How long this burgeoning Black Play Diversity trend will have legs remains to be seen.

Another theatrical surprise gracing this year’s season, something of a rarity, were two highly touted operas, one at a museum, the other on stage at Lincoln Center. First to open (and still running) is Lynn Nottage’s Intimate Apparel. Sung in English with English subtitles, the opera, a collaboration between Lincoln Center Theater and the Metropolitan Opera, opened at the Mitzi E, Newhouse Theater on Sunday, January 30.

A stripped-down version of Nottage’s 2003 play by the same name, Intimate Apparel, tells the story of Esther (Kearstin Piper Brown), a Black 35-year-old corset and camisole seamstress aching for love in 1905 New York. Adding much flavor to the opera is her clientele which consist of socialites and streetwalkers. Directed by Bartlett Sher, and Running 2 hours and 30 minutes with one intermission, the opera closes its doors on Saturday, March 6, 2022.

Second on the boards, was the equally brilliant The Garden of the Finzi-Continis, a collaboration between the National Yiddish Theater Folksbiene and New York City Opera opened Off Broadway on Holocaust Remembrance Day for a limited run of eight performance from January 27- February 6 at the Museum of Jewish Heritage. Sung in English, also with subtitles, and running three barely noticeable hours with one intermission, the opera sold out even before it opened.

Based on Giorgio Bassani’s best-selling 1962 novel, The Garden of the Finzi-Continis, is both a love story, albeit unrequited, and the story of the Finzi-Continis family, privileged members of the Jewish Community in Ferrara, Italy, and their friends during the rise of Mussolini and the eventual Nazi occupation.

Having seen the 1970, 90-minute film directed by Vittorio De Sica starring Dominique Sanda and Helmut Berger - it won an Academy Award for Best Foreign Language in 1972 - composer Ricky Ian Gordon (The Grapes of Wrath, Intimate Appeal), who had long been a fan of De Sica’s film, couldn’t resist turning the Bassani’s story into an opera.

“I think there was something about the juxtaposition of personal pain and universal pain. I suddenly saw what made the story so tragic. I couldn’t even endure it,” he told one interviewer. The opera’s librettist Michael Korie (Grey Gardens, War Paint, Flying Over Sunset), must have agreed for their opera, after a short Covid delay had its world premiere. For those who missed it, stayed tuned, for rumor has it that a future production is in the works.

Directed by Michael Capasso and Richard Stafford (he also is credited with the production’s concept), Fenzi-Continis, with its two acts, a prologue, an epilogue, nineteen incident-filled scenes, a cast of 32, and a fifteen-member James Lowe conducted orchestra playing with a light touch that allowed the acting and singing to take precedence. The production, beautifully enhanced by John Farrell’s set of angular walls, harboring changing location projections, spans the late 1920s through 1955.

Sharing the majority of scenes, and most of the singing, are the Finzi-Continis’ two children, Micòl Finzi-Contini (soprano Rachel Blaustein), her closeted and sickly brother Alberto (baritone Brian James Myer), his best friend and secret crush Giampi Malnate, (baritone Matt Ciuffitelli), and Giorgio (tenor Anthony Ciaramitaro, in whose eyes the story, from beginning to end, is being recounted.

No doubt, it is no accident that Giorgio bears the same first name as book’s novelist, as much of this story, though fictional, is based on the life of Giorgio Bassani as he lived it.

The lion’s share of the opera, aside from trip to Venice by Micòl, and a visit to Giorgio’s house, takes place at the home, garden, library, and tennis courts of the Finzi-Continis estate where it was believed by family, friends, and the Jews of Ferrara, erroneously as it turns out, that this lush walled-in tree-filled Garden of Eden was a safe haven where nothing will change, despite World War II going on outside.

In 1938, shortly before Kristallnacht, for the Jews of Italy, everything changed when the government under Mussolini began to legislate and enforce anti-Semitic laws which effectively removed Jews from all government jobs, teachers in public schools and universities, and the armed forces, marrying non-Jews, employing non-Jews, and owning property. The evil that was to follow is still, to this day, unfathomable.

Flashing ahead in time to 1955, long after the Finzi-Continis and the Jews of Ferrara are no more (some left early on, the others ended up in the death camps) the opera’s prologue begins with Giorgio. Having survived the war, he is returning to the village synagogue of his youth, now in ruins, he learns from the synagogue’s caretaker that all of the congregants, including Finzi- Contini family were deported to the camps.

Scene two brings us back to 1927. Here Giorgio standing in the village synagogue is observing himself at age 15 making eye contact for the first time with the young Micòl Finzi-Contini later to become, obsessively so, the unrequited love of his life. From scene two on, the story follows the fate of Gorgio, his brother Ernest (Robert Balonek), the Finzi-Contini family, their friends, and the people of Ferrara.

Some ten years later, Giorgio, now a student at the University of Bologna, while biking past the Finzi-Continis compound he spies Micòl leaning over the wall of the family compound. Flirtatiously, she invites Giorgio to come inside to play tennis. Worrying about where to park his bike, how to climb the wall, and perhaps even remembering his father’s (Franco Pomponi) advice that the aristocratic family was well above their station, regrettably he rides on.

When the village’s tennis club stopped allowing Jews membership, the Finzi-Continis’ opened their garden to both rich and poor. Giorgio and his friends, having been denied membership in the village tennis club, they were invited to the Finzi-Continis’ garden for tennis and refreshments where they are greeted by Micòl and Alberto, and introduced to other members of the family. Chief among them was Micòl’s father Professore Ermann (Peter Kendall Clark), who upon that hearing that Jews were also banned from using the public library, suggested that Giorgio to do his University research at the family’s extensive library.

It is here that Giorgio, entering into the family’s daily life, begins to develop a close friendship with Micòl. Soon, coupled with beautifully sung duets, and walks in the garden away from the crowds, becomes their Joy du Jour.

Eventually, in two highly dramatic love-confessing scenes, one awkward, the other a physically shocking and aggressive move in Act Two, Scene 6), Micòl, rebuffing Giorgio’s advances, ends their friendship. He later learns the soul-crushing news that all along Micòl was having an affair with Malnate.

At the opera’s ending, again it is 1955 – still hopelessly in love with Micòl – we find Giorgio standing in the ruined synagogue of Ferrara. Realizing that he must go on with his life he sings, “You are my memory. To live my life, I need to let you go. Addio, Mamma, Addio, Papa, Addio, Micòl, Addio. Addio. With one last look back, Giorgio exits. As the lights begin to fade the in the synagogue’s empty space, the brass lamp, a reminder of God’s eternal presence, which hasn’t been lit for years, begins to glow.

The National Yiddish Theatre Folksbiene, New York City Opera opened their production of The Garden of the Fenzi-Continis on Thursday, January 27, 2022 for 8 performances at the Museum of Jewish Heritage at Edmond J. Safra Hall, 36 Battery Place in Manhattan. It closed on Sunday, February 6. Running was 3 hours with one intermission. For more information, or to buy tickets go to https://mjhnyc.org or call 646-437-4202.