When There Are Nine About Ruth Bader Ginsburg 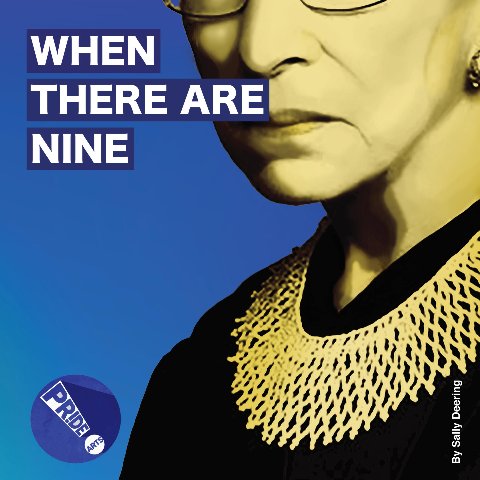 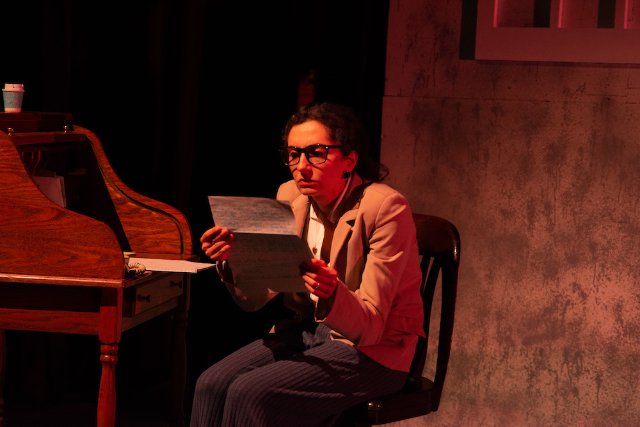 When There Are Nine, a world premiere play about Ruth Bader Ginsburg, is an entertaining production that tells the public story of the late Supreme Court associate justice. Sally Deering’s script is being staged at the Pride Arts Center with inventive staging and direction by Sam Hess that makes the most of the small Pride space. The play focuses on the public story, thereby omitting important elements of Ginsburg’s legacy—apparently leaving them for somebody else’s production.

Playwright Deering positions her work as a dream play, taking place in Ginsburg’s mind, where she recalls important moments in her life and how she addressed challenges. Deering captures Ginsburg’s wit, humor and intelligence as she fights constant mid-century battles for female equality in law school, Big Law, judicial hiring practices and even in her own Jewish faith. (She was not allowed to say the mourner’s prayer when her mother died because only men were allowed to do that.) But Ginsburg apparently never dreamed of being celebrated as a feminist, let alone as a pop culture icon.

Talia Langman is an inspired casting choice for the lead role. The script calls for her to change from youthful to middle-aged to aged and back again  as time loops throughout the play. Langman is fierce and very human in her portrayal; she even has physical similarities to the justice. Gabriel Estrada is sweet and charming as her adoring husband Marty Ginsburg, who quietly practices tax law and cooks dinner while his wife is setting precedents and making headlines in her battles for equal rights.

Nicholia Q. Aguirre plays Gabby, RBG’s empathetic medical caretaker in scenes where she’s fighting yet another bout of cancer. (Ginsburg died of pancreatic cancer in September 2020. Her husband died in 2010.) We see the other eight female cast members play students, protesters, judges and other roles throughout the play. Hannah Boutilier does a clever cameo as a judge (male, of course) interviewing Ginsburg for a law clerk position.

The play’s title comes from Ginsburg’s answer to the question about when there will be enough women on the court. “When there are nine,” was her response. Sam Hess’ direction is smart and moves the characters through these phases of Ginsburg’s life with minimum fuss. Langman herself skillfully switches eras with the addition of a cane or by modifying her physical posture and gait.

The scenic design features jagged black-and-white set pieces, suggesting torn paper. Lighting and projection design are by Connor Sale with sound design by Val Gardner. The costume scheme by Katelyn Sutton features red sneakers for the eight female actors who perform all the other roles. Even in the wedding scene where Justice Ginsburg marries wife and wife, they are in gown or tuxedo with red sneakers.

There’s much to admire about the Ruth Bader Ginsburg story, of course. But Deering’s dream play might have included the fun Ginsburg and her fans had with her recent role as a pop culture icon, with videos of the 80+ year old justice working out with a trainer and being displayed as a bobblehead. And her image and lace collar icon appeared on all sorts of merch. The playwright might have included a humorous bit about the celebrification of RBG.

I’m a fan of Ginsburg’s work as much as most white liberal women are. She started her battles for legal equality in mid-century America and those battles were mostly for white women against the white male patriarchy. I certainly admired her work as a volunteer attorney and then as general counsel for the ACLU—an organization of which I’ve been a member for more than 50 years.

But BIPOC women didn’t feel supported by Ginsburg’s work. As Sabine Waldeck wrote in the Berkeley Beacon shortly after Ginsburg’s death, “Feminism has been and continues to be white, and Ginsburg upheld that. It is impossible to entirely praise her and all she did for women without critiquing her faults when it came to supporting Black Indigenous People of Color (BIPOC). She failed to include the newer wave of intersectional feminism in her views and politics, letting down many women of color who also needed her support.”

(Her moniker, the “notorious RBG,” was itself cultural appropriation—by a member of her team—based on the Notorious B.I.G., the rapper also known as Biggie Smalls. He was born Christopher George Latore Wallace.)

But the most important flaw in Ginsburg’s legacy was her inability to consider her retirement from the perspective of the country and our need for legal support for critical liberal issues. Instead she viewed possible retirement as her own decision, a decision that only affected her. Had she participated seriously in a her famous conversation with President Obama in July 2013, she might have realized how important it was that she retire then, so that he could nominate a new justice early in his second term. Alyssa Robinson addressed this cult of RBG in a Washington Post column.

When There Are Nine continues on the Broadway stage at Pride Arts Center, 4139 N. Broadway, through March 13. Tickets are $30 with $5 discounts for students and seniors. Running time is 90 minutes with no intermission. Covid protocols (proof of vaccination and mask-wearing while in the theater) are in place.