City of Glass is Sensational! 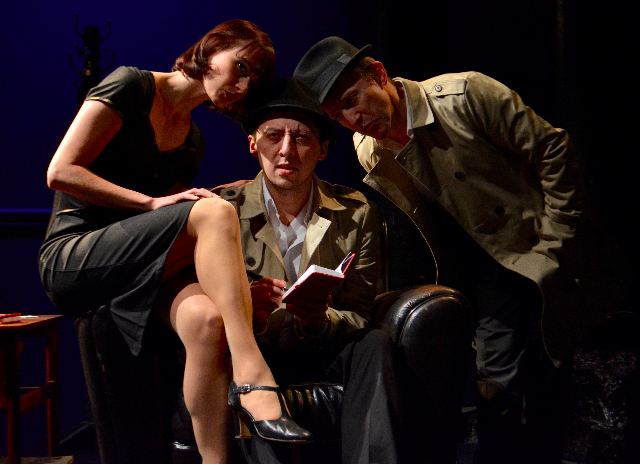 I'm not going to be subtle here:  This is a rave review!  And yet to say too much about UTC61's production of City of Glass would ruin it for the reader -- for the power of this play is that you only truly start to understand what is actually going on as the play progresses.

I had no idea what to expect at The New Ohio Theatre far West on Christopher Street.  I hadn't read Paul Auster's book, City of Glass, though I had heard of it (Auster was nominated for an Edgar Award for Best Mystery of the Year).  But Edward Einhorn's adaptation is really not an adaptation -- it is a brilliant creation all his own that has everything one might ask for in a night at the theatre: Brilliant writing, a spell-binding plot that adds layer after layer, an unbelievably talented performance by the lead actor, Robert Honeywell.  There is a combination of suspense, horror and humor that makes every second matter.  To me it was reminiscent of Sweeney Todd, The Maltese Falcon and Deathtrap all in one!

The audience is introduced to Daniel Quinn (Honeywell) when he walks onto the stage -- his apartment -- and starts to undress.  Chatting casually, he shares a sad history (he is alone; his wife and son are dead) and explains that he makes his living writing mystery novels featuring a two-sided detective who is clearly his alter ego.  As Quinn narrates, Silent Man (the comic Mateo Moreno) and Silent Woman (the elegant Dina Rose Rivera) portray the two sides of that detective -- but what Quinn really wants to tell us about is how his life all changed when he received a phone call intended for another man.  The caller, Quinn explains, was desperate to speak with "Paul Auster" -- and Quinn decides that he will assume that role/persona and go meet the mystery caller so adamant about needing Auster's help and protection.

For the next 90 minutes, Honeywell mutates from Quinn, to his fictional detective, to Auster, to the caller (Peter Stillman Jr., a man who suffered horrific childhood abuse that has left him physically and psychologically damaged), to Stillman's wife, and even Stillman's abuser/father!  Supporting actors Moreno and Rivera act out what Honeywell alone narrates, but never speak a word -- all three shape-shifting from one character to another as he tells the tale.  The audience is left trying to unravel the mystery, which only gets more and more complicated, and is continuously challenged to decide what and who is real. Or is everything actually just a figment of Quinn's imagination?

To the side of the set, but very much visible to the audience, Freddi Price accompanies the action and drama with music and sound effects that add to the aura of mystery and suspense.  The set is spare but effective, easily morphing from Quinn's apartment to Stillman's home, to a back alley outside that home (and again asking the question:  What is real and what is in Quinn's head?).

Intermittently, close-ups of the actors are projected onto the backdrop via live camera, giving the audience an intimate glimpse at their expressions and allowing us to "get inside their heads" -- a pretty scary and bizarre place to be!

Ultimately, in Einhorn's own words, City of Glass is a play about "brokenness:" Quinn is a broken version of Auster; Stillman is a son deliberately broken by his father.  By the play's end, the audience is left to ponder the devastation and delusion to which we seem compelled to subject ourselves and others. Most of all we marvel at how brilliantly Einhorn, Honeywell, and the rest of the cast and production staff have teamed up to tell the tale.

City of Glass is at The New Ohio Theater at 154 Christopher Street (between Greenwich Street and Washington Street in the West Village) from February 19 through March 12. The production team includes Carla Gant (costumes), Christopher Heilman (scenic design), Gil Spirling (video), Christopher Weston (lighting) and Patrice Miller (choreography). The performance schedule is Wednesday at 7 PM; Thursday - Saturday at 8 PM; Sunday at 5 PM, with an added performance on Saturday, March 12 at 2PM; there are no performances on Sunday, February 28 or Wednesday, March 2. Tickets are $25 - $30 and are available by calling 888-596-1027 or online at www.untitledtheater.com.