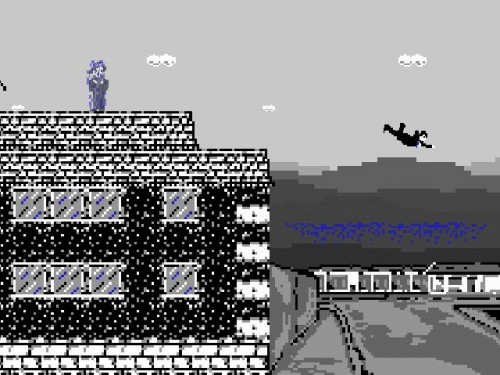 Yves Klein leaping "Into the Void" after receiving instruction from Marcel Duchamp/Rose SÃ©lavy.

Artists in the exhibition include Rob Gonsalves, Victor Liu and Anthony Montuori.

Rob Gonsalves' O.f.f.i.c.e.A.n.t.s. is a ten-letter-acronym for Organized, Fast, Frantic, Intelligent, Corporate Entities Acting in a Novel Technology Simulation. The worker ants are developers, drones who perform repetitive tasks. You can interact with the O.f.f.i.c.e A.n.t.s. by using the two small canisters of developer nourishment, "Pizza Bits" and "Coda Cola." Campaign Horse is a modified version of the basketball game "HORSE." Using insults heard during recent political campaigns, the player insults their opponent or "takes shots" at them. The political points are added up by the letters and, if enough damage is inflicted, your opponent's credibility is called into question.

Victor Liu's audiovisual installation, Airlock Park, is an interactive, screen-based work powered by a PlayStation 3 game machine. Inï¬‚uenced both by the history of moving images as well as by the spatial dynamics of video games, this work pulls image fragments from many sources - from cinema and art history to internet video and video game footage - to construct virtual tableaux, or scenes.

Anthony Montuori's games illuminate the futility of the modern pursuit of success. Debtris, a spinoff of "Tetris," allows the player to pay off their insurmountable student debt playing the popular computer game for minimum wage. In Into the Void, the player becomes Yves Klein and attempts to remain in the void for as long as possible and, as in life, it is a struggle to do that. In Sisyphus, the gamer assumes the role of the Greek king and pushes a boulder upwards, to remove it from a hole in the ground. As the boulder gets closer to the top, the task becomes more difficult until the boulder falls back down again. Push, struggle, repeat forever.

Rob Gonsalves attended Northeastern University and UMass Lowell. Currently a Boston resident, he is an active member of COLLISIONcollective and works as a senior consulting engineer at Avid Technology.

Victor Liu's has shown at the American Museum of the Moving Image in Queens NY, the FILE Festival in Brazil, the Microwave Festival in Singapore, the Boston Center for the Arts, among other venues. Grants and commissions include a NYFA Fellowship in Computer Arts and work commissions from Turbulence.org and the Whitney Museum's Artport. He also served as a juror for the 2007 NYFA Computer Arts Fellowships. Liu currently lives and works in Brooklyn, NY.

Anthony Montuori is an Artist/Video Game Maker who lives and works in Boston, MA. He went to college for his Associates degree in fine arts at Hudson Valley Community, then to Montserrat College of Art for his BFA, and the School of the Museum of Fine Arts for his MFA.