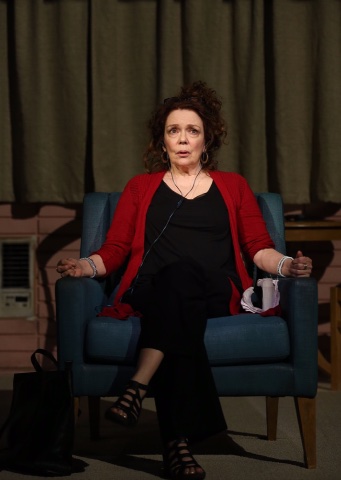 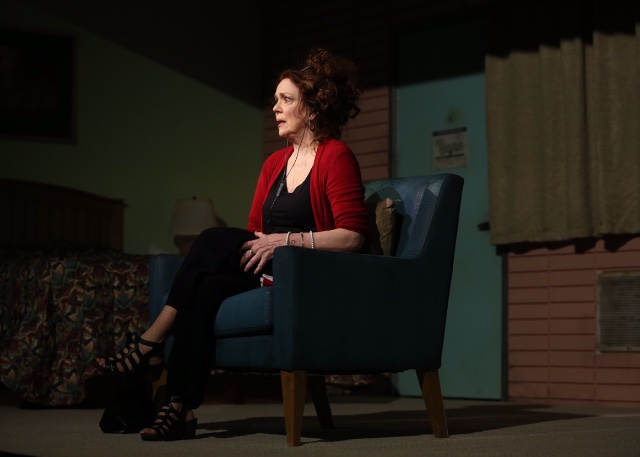 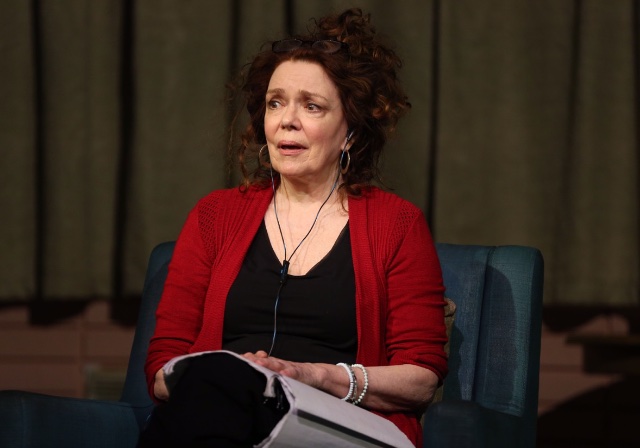 Dana H.
by Lucas Hnath
Adapted from interviews with Dana Higginbotham
by Steve Cosson
Developed by The Civilians and the Goodman Theatre
Presented by the Vineyard Theatre
New York, New York
Performances through March 29

Playwright Lucas Hnath wanted to find out about his mother's kidnapping while he was away at college. He asked a theater colleague, Steve Cosson, to interview her.  Cosson is known for his creating of theater inspired by real life.

At the play's start, the interviewer and subject enter, but soon the interviewer has exited the set, a motel room.  Dana lives in many of them as she travels, kidnapped by a criminal she has served as chaplain.  Dana is a psychiatric social worker in hospice and prison wards. Like most people in the helping professions, she is a bit wacky herself.

Hnath as playwright has cut the tapes.  Interestingly he is seldom mentioned by his mother.  These segments may have ended up on the cutting room floor.  The focus here is on Dana. This is Dana's version of the story.

Deirdre O'Connell is brilliant as Dana.  Largely confined to the interview chair, she has more apt and suggestive gestures than one can imagine.  She is mouthing Dana's taped voice, which is being transmitted into each ear.  She can't hear the audience laugh. There is no background sound. Only the words to guide her mouth.  Is she Edgar Bergen being fed Charlie's words? Charlie is the mouth. Bergen the ventriloquist, the voice.  Dana Higgenbotham is voice and manipulates O'Connell by tape transmission.

The effect of a real voice of a real human being inhabiting an actress, body to the voice, makes compelling theater.  You can imagine Marni Nixon singing for Audrey Hepburn in My Fair Lady. Hepburn sings on film. Nixon stands in studio recording the song to Hepburn's lip movements and gestures. Final adjustments are made by recording technicians.  That process is off screen.

In dubbing of American films for foreign audiences, the German language, for instance, is actually shaped to the mouth speaking English.  This has become such a sophisticated process that you believe you are watching Cate Blanchette speaking German.

We are left wondering what did and did not happen to Dana.  Only once is the story broken by the arrival of a motel cleaning lady.  She takes off the bed sheets. The sight of blood generated as Dana's captor raped her is shocking.  This no longer is fiction or fantasy. Something terrible happened.

Dana's bravery, and her recovery through construction crew work and finally a return to her chaplaincy is done with remarkable aplomb.  She finds herself a good bridge for dying people.  She can lead them across the great divide between life and the hereafter. This is theater you can't forget.