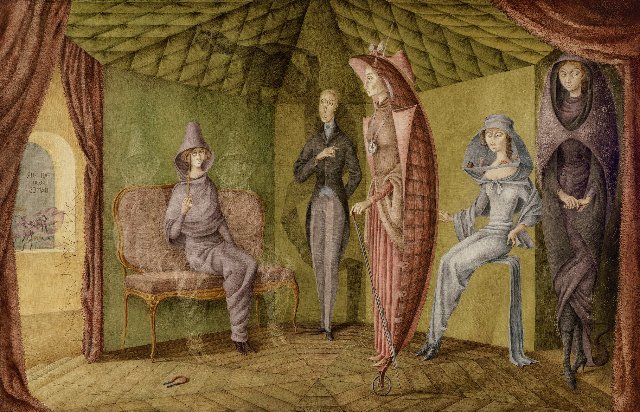 The Museum of Fine Arts, Boston (MFA), has acquired the painting Tailleur pour dames (1957), a major work by Remedios Varo (1908–1963), a leader of the Surrealist movement in the Americas. Varo made fewer than 200 oil paintings during her life, and Tailleur pour dames is one of her very rare, large-scale works, the majority of which remain in private collections. It is the first painting by Varo to enter the MFA’s collection, the only work by the artist in New England, and an acquisition that will transform the Museum’s presentation of modern art in an international context. The Varo will go on public view alongside additional recent acquisitions in the Carol Vance Wall Rotunda beginning March 17, after which it will be featured in the late spring 2022 reinstallation of the MFA’s 20th-century Art of the Americas collection. As part of a broader project that presents modern art beyond the standard boundaries of geography, time and artistic movements, Tailleur pour dames will be highlighted in a gallery dedicated to works from Latin America.

“Varo’s recognition in the Mexican art world began in her lifetime, and she is now widely recognized as one of the most compelling Surrealists of the 20th century. It is exciting that we will now begin to be able to tell the story of this international artistic movement through the art of a woman who worked in Latin America,” said Matthew Teitelbaum, Ann and Graham Gund Director. “The layered narratives and global connections that Tailleur pour dames represents demonstrate our commitment to connecting our visitors with works by artists from all backgrounds.”

Painted at the height of her career, Tailleur pour dames showcases key motifs of Varo’s mature work: strong female protagonists, stage-like spaces, supernatural imagery and representations of the transformative craft of sewing. The otherworldly interior depicted in the painting is the showroom of an unusual tailor dedicated to making women’s dresses rather than men’s suits. He appears near the center but recedes into the background, his nose and eyeglasses in the shape of scissors. On the right, each garment possesses a magical quality: a rose-colored dress converts into a sailboat, a blue scarf stiffens to become a seat and tray for cocktails, the fabric of a dark hooded cape fizzes like champagne. Invisible powers are suggested by the magnet on the web-like floor attracting metal pins that come from nowhere, the ominous shadow that lurks behind the tailor, and the ghost-like dress floating through the window. Influenced by the writings of Sigmund Freud and Carl Jung, Varo described this complex composition in relation to psychology: “The client, who is looking at the models, splits into two other persons because she does not know which model to choose, and her somewhat transparent doubles represent her doubts.”

The MFA’s recent acquisitions of paintings by Frida Kahlo in 2016 and David Alfaro Siqueiros in 2017 have strengthened the Museum’s presentations of politically charged, post-revolutionary Mexican art of the 1920s and 1930s. The Varo acquisition enables the Museum to tell the subsequent story of Surrealism—a history deeply connected to experiences of exile and immigration rather than nationalism. Tailleur pour dames also opens narratives about women painters and intellectuals of the period, and the fluid connections between the European and American art worlds.

Born in Anglès in northeastern Spain, Varo studied at the prestigious Royal Academy of Fine Arts in Madrid, where she regularly visited the Prado to examine the works of Hieronymus Bosch, Francisco Goya and El Greco. She graduated in 1930 and joined the avant-garde circles of Barcelona and Paris, and her paintings, drawings and collages appeared in Surrealist publications and international exhibitions. Following the outbreak of the Spanish Civil War and the Nazi occupation of France, Varo, like many other intellectuals and Spanish refugees, was briefly arrested. In 1941, she fled to Mexico City. Varo spent the rest of her life in Mexico City, where she developed her mature artistic style and completed her most compelling and influential paintings, including Tailleur pour dames.

In Mexico, Varo worked in a variety of positions that informed her art, designing theater sets and costumes, creating advertisements for Bayer pharmaceuticals and making technical drawings of disease-carrying insects for the Ministry of Public Health in Venezuela. Her longstanding interests in supernatural forces, alchemy and alternative realities were nurtured by Mexican traditions of curanderismo (Indigenous healing) and folklore. Varo devoted herself fully to her own art around 1949. Inspired by Renaissance panel painting, she developed a meticulous process of transferring underdrawings onto fiberboard coated in layers of white gesso and building up luminous layers with layers of jewel-toned color, adding tiny details with a single-hair brush. The first exhibition featuring her work in Mexico, in 1955, was a breakthrough success; Diego Rivera proclaimed her “among the most important women artists in the world” and she instantly gained a waitlist of collectors. Varo died suddenly in 1963 at the age of only 54. In 1971, a retrospective, which included Tailleur pour dames, was held at the Museo de Arte Moderno in Mexico City—it was the most well-attended exhibition in the institution’s history, drawing more visitors than those of the famed male Mexican muralists.

In order to purchase Varo’s masterpiece and to expand the overall narrative of 20th-century art presented in the galleries, the Museum is deaccessioning three 20th-century paintings from the Art of the Americas collection: Abiquiu Trees VII (1953) and A Sunflower from Maggie (1937), both by Georgia O’Keeffe, and On a Shaker Theme (1956) by Charles Sheeler. Both artists remain well represented in the MFA’s collection across media. The O’Keeffe paintings will be sold at auction through Christie’s in May, while the work by Sheeler has sold privately.