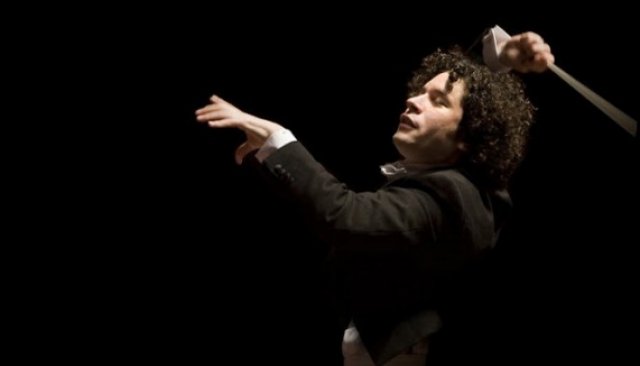 For the last 176 years, the Vienna Philharmonic has staked its reputation on the Austro-Germanic symphonic tradition, bringing the music of composers like Schubert, Strauss and Suppe before the public with style and skill. However, Sunday's matinee concert, the third of three this weekend at Carnegie Hall, the great orchestra eschewed the Mozart and Beethoven for a refreshing focus elsewhere. For this concert, the orchestra and current guest conductor Gustavo Dudamel agreed to play symphonies by Charles Ives and Piotr Ilyich Tchaikovsky, whose only common thread was the unconventional and innovative nature of their work.

At first glance, the Ives Symphony No. 2 would seem an odd choice for this very European orchestra. however, closer examination (and a perusal of the concert notes by Jack Sullivan) reveals that the Vienna players have a long relationship with this symphony. After it was premiered in 1951, they were the first orchestra to record the piece two years later. It is part of their current touring repertory on a trek that will take them as far as Dudamel's native South America on this tour.

Ives was an absolute original, a hard-working insurance executive who composed at night. (That might have been why this work, written in 1903 had to wait until 1951 for its premiere. It was first given at Carnegie Hall with the New York Philharmonic under Leonard Bernstein.) Ives' style can best be described as collage. He veered from idea to idea, assimilating folk songs, hymns and tunes played by his father's Connecticut brass band. These were all slapped together in towering structures that seem bizarre and unstable at first but slowly reveal themselves to be masterpieces of Yankee ingenuity.

The strings launched the first movement of this symphony, with a slow, surging theme that evoked a kind of American pastorale, a time of horses, foliage and the idyll of the New England town common. Ives added comment through the addition of quotes from American folk-tunes and rhe military anthem "Columbia the Gem of the Ocean.” The effect of all these themes and ideas flying pell-mell is not chaos but a mosaic--a jigsaw of sound carefully assembled by a composer on his way to becoming a master builder.

The brass added sensitive accents to the four movements that followed, culminating in a lazy Adagio cantabile(that quotes "America the Beautiful"!) of great beauty. Dudamel poured forth an ewer of liquid orchestral gold before the work turned yet again, making a brief stop at Lento maestoso before it segued into the very lively finale. This built in fury and boisterous energy until exhausting itself in a single, final, violent tone cluster, eleven notes of the twelve-tone row played at full fortissimo blast. It was a most impressive and playful eructation from the always irreverent Ives.

That noun might also be applied to the beginning of the Tchaikovsky Fourth, where horns, trumpets and trombones blast out a seven-note motif. This grating, much repeated figure is the composers version of Beethoven's “Fate” motif. Happily, it  yields to melancholy, introspective music played with great lyricism by the Viennese. Woodwind and strings joined the sad, lilting theme before being run over repeatedly by the tumult of the brass section.

The middle movements are gentler stuff, a lamenting theme for the English Horn that gives way to a lush string melody and a plucked scherzo, with the five string sections setting aside their bows for staccato phrases produced with the fingers. The finale returns to the magnificent violence of the opening, pitting the "Fate" theme against a new, optimistic motif that grows organically from the scherzo. After bringing this to a triumphant close, Dudamel and his forces encored with the much loved Waltz from Swan Lake. Sometimes you don't need to play Strauss to leave the people happy.