A perhaps foreboding production for Europe/World 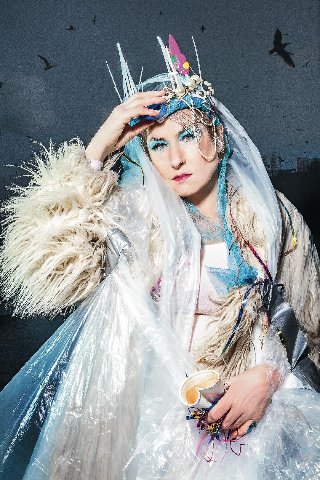 Queen Lear at Gorki Theater, Berlin  -  Based on William Shakespeare  -  In an Adaptation by Soeren Voima.

Everything is upside down in this production. A faint semblance to Shakespeare's King Lear remains as in a fever dream, or better yet as a trip beyond borders of human sanity.

Directed by Christian Weise, King Lear is now Queen Lear, played by the well known Corinna Harfouch. She divides her empire among her children, the oldest son Prince Goneril (Tim Freudensprung) and the second one, Renegade Regan (Emre Aksizoglu) while her youngest daughter, charming Cordelia (Yanina Cerón), does not want any part of it.

How smart this decision turns out to be becomes obvious in the turbulent actions of the three hour play. All starts out in a spacecraft while the queen and her family look down to earth. Then, swiftly, everything and everybody tumbles towards it. Soon we see images of a real bus stop on the street outside the theater beamed onto the stage, with the actors milling around it. This interlude strangely grounds everything to a recognizable surrounding. Here, countess Gloster (Catherine Stoyan), robbed of her eye sight, stumbles about. She and her daughter Eddi (Svenja Liesau), spouting commentaries about the world and Queen Lear, wander aimlessly among her former lieges.

The frenzied action on stage is supported by an equally fast paced set or setting by Stefan Czura and Raimund Stoll. Here projections on a screen fight with visual happenings, all underscored or enhanced with live music by Jens Dohle. Towards the end of the two acts, the play slows down, somewhat, but nobody is certain where it is supposed to go to. Actually, in hindsight, the frenzied happenings on stage at the opening night now seem like a foreboding to Europe's actual disaster, the war in Ukraine.