The Pajama Game a Perennial Favorite 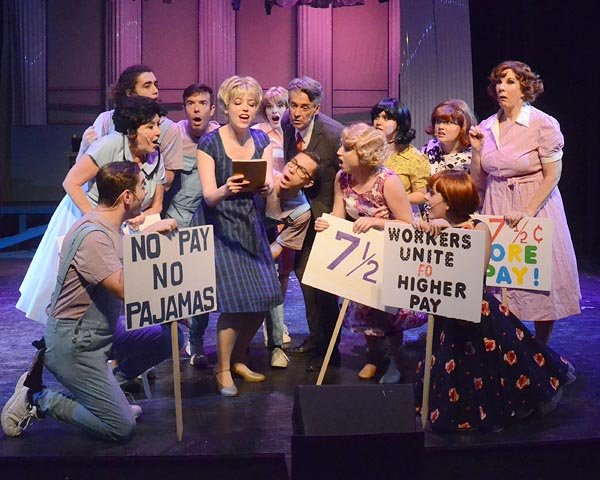 A September 2018 survey from Matrass Advisor, an industry advocate who follows trends in the bed and sleep habits of Americans, found that 67% of American millennials (age 30 and under) sleep in the nude.  The rest of us male Americans, sleep in boxer shorts or briefs, or in the nude, and a few geezers (over 70) still cling to the pajama fashions of the 1940s and ’50s.

So what do these percentages have to do with the state of the American pajama industry?  Frankly, I’m not quite sure other than to discover that, like everything else in our ever-evolving American society, we have a perverse penchant for sharing our personal information with the world.  Facebook, thanks you profusely. You’ve made them the world’s first Trillion dollar company on our planet without paying a dime to anyone for that priceless information.

Speaking about pajamas brings us to the Palm Canyon Theatre (PCT) musical production “The Pajama Game” that opened last weekend in Palm Springs. The musical debuted in 1954 on Broadway, as the Korean War was declared over, and pajamas back then was still considered the choice of men’s sleep-ware.

No matter the season on Broadway or theatres across America, ‘ love’ is eternally in the air, pajama or not, and PCT’s production is no exception. Based on the novel “7 & Half Cents”, by Richard Bissell, the musical is written by Broadway legend George Abbott and novelist Richard Bissell, with music and lyrics by Richard Adler and Jerry Ross, is directed by Richard Marlow.

The story, in short, celebrates Romance, which is blossoming at the “Sleep-Tite Pajama Factory in Cedar Rapids, Iowa.  When new superintendent Sid Sorokin (handsome Tenor Nicholas Sloan) arrives to take over the running of the factory; he’s introduced to feisty union rep Babe Williams (a striking Blonde Jamie Walker-Sloan), and before you can say “Bob’s your Uncle,” sparks are flying between these two appealing and talented performers.

Babe is a no-nonsense, strong, union leader but is also a female with romantic designs on Sid.  Their attraction is mutual, but they land on opposite sides when the union demands that the company management should authorize the raises.   It’s one of the oldest running divides in industrialized societies:  Management rights vs. Workers rights, where it takes the wisdom of a Solomon in such negotiations to make everyone happy and willingness to return to work.

Musical plotlines of 60 years ago generally kept the story relatively simple and easy to follow.  The appeal that audiences were expecting came in the form the music and the lyrics. And the songs that the composers and the librettists provided.  And three outstanding numbers came from their collaborations: “Hey There,” “Steam Heat,” and “Hernando’s Hideaway.”  Also, winning three Tony’s in the process.

“Hey There” features Sid and Babe in solo performances:  Nicholas Sloan in Act One and Jamie Walker-Sloan in Act Two.  These two talented performers have great on and off-stage chemistry as it turns out they’re married to each in real life, and it shows in their singing and acting numbers. A nice casting touch.

If ever a theatrical company needs a Bob Fosse-inspired dancer/choreographer for a musical/dance production, Anthony Nannini, as Charley, has to be on your wish list.  His execution and precision of Fosse-like dance moves is exciting to watch.  The “Steam Heat” number that begins Act Two is terrifically performed by Nannini and Rob Rota.  Kudos to choreographer Stephanie Eley.  Well Done.

The third number to emerge as an award-winning original number of years ago is performed by the spirited ensemble in “Hernando’s Hideaway”  The ensemble members are energetic even though there are traffic management issues on the small, somewhat cramped, and cluttered acting space designed by Toby Griffin. It’s a minor point, but back-stage actors can be seen moving around off stage by the audience. It’s an easy fix that black cloth curtains can do so as not to break the onstage mood and action.   The main thrust of the production, however, is that the basic human drive for love, Romance, and hope, is very much worth fighting for and is very much alive in this production.

The musical accompaniment is provided by musical director Phillip Hubler on piano, David Bronson on drums, and Larry Holloway on Bass.

The creative team for “The Pajama Game” led by director Richard Marlow includes the always striking costumes of Uber designer Derik Shopinski, who rarely disappoints with color schemes and colorful costume designs. Another kudo also goes to Wig Designer Mado Nunez for the many styles worn by the female ensemble.  Lighting Design is by J.W. Layne, with sound design by Sean Seymour.