First Down at 59e59 Theaters 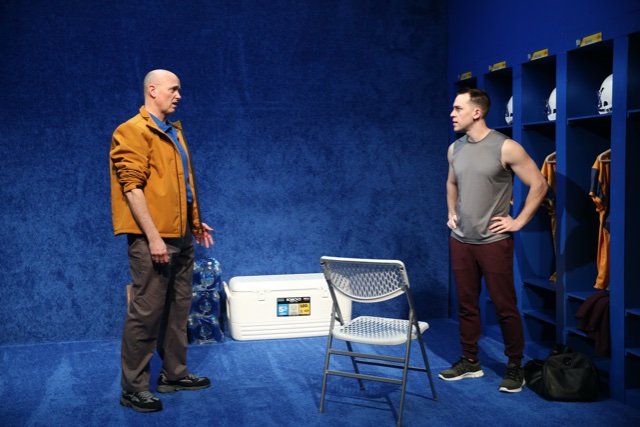 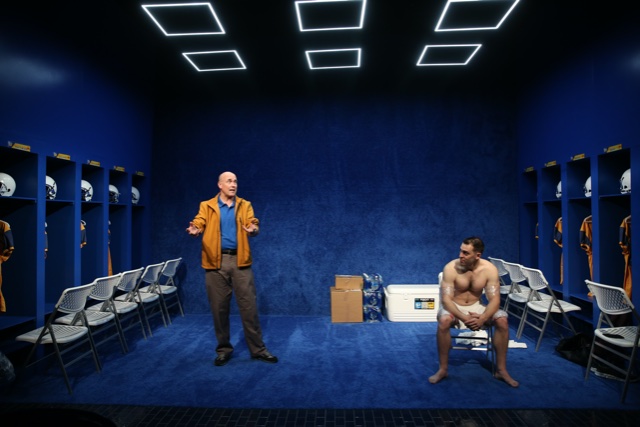 Larry Bull as head coach and Peter Romano as his Arab American Muslim star on the evening before the Super Bowl. 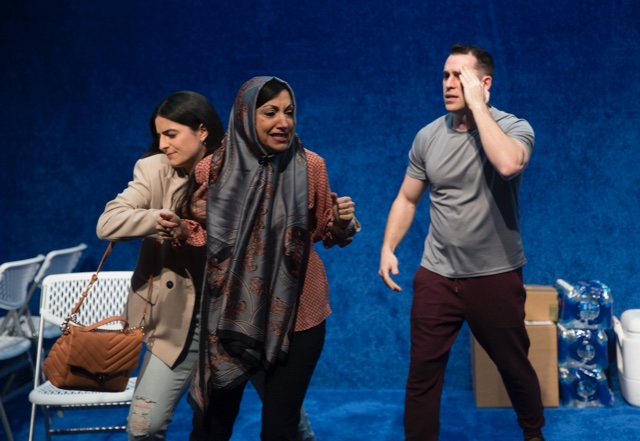 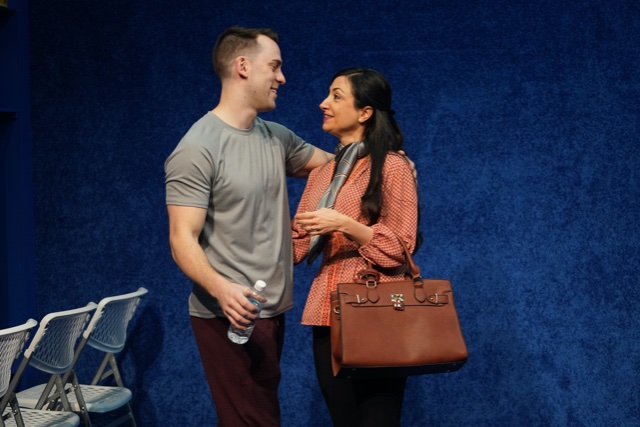 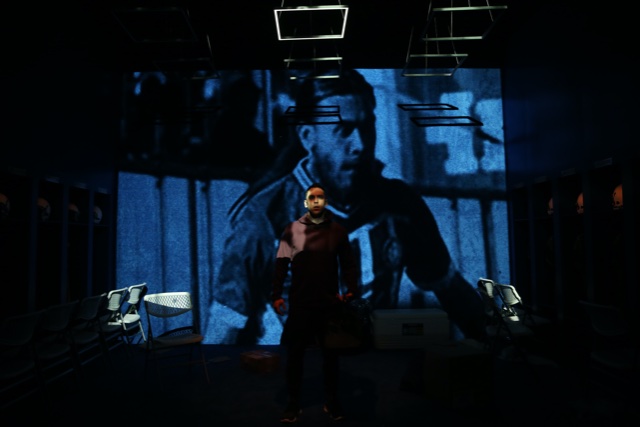 Video projections give the feel of the game in "First Down."

First Down is a terrific new play by Sevan now running at the 59e59 Theatres.  Johanna McKeon directs the quartet to give us insight into the pain caused outsiders in the United States by people who were outsiders themselves when they arrived.

First Down opens in a football locker room, hallowed ground.  Here a man faces east in prayer, seeming to follow Al-Baqarah: “So from wherever you go out [for prayer, O Muhammad], turn your face toward al-Masjid al-arm, and indeed, it is the truth from your Lord. And Allah is not unaware of what you do.”  The locker room as mosque?  Not quite, but maybe the Superbowl football field tomorrow will be.

The hoopla around Novak Djokovic’s refusal to be vaccinated before the Australian open, where the jabs were required, pales by comparison with what rolls out on stage in First Down. Anti-vaxers are tamer than Black athletes furious over George Floyd’s murder-by knee.  They take to the knee in peaceful resistance to the singing of the Star Spangled Banner and the waving American flags.

Football hero George Berri rises when his coach, Bill Fitzgerald (Larry Bull) enters the room to unfold the players chairs before they arrive.

Berri is overwhelmed by the feeling that his all American name, George Berri, and his wholesome appearance have provided cover for him. He has increasingly come to feel that in his position, a great football player whose eyes the world will focus on for the Big Game, he should announce who he is. Peter Romano does a star turn as George, who, until the moment we meet him, has passed as American American. No one is going to out him as an Arab American Muslim.  He will do the job.

Turns out he is not much of a practicing Muslim. His mother has been buffeted around by all sides after his father was killed by friendly bullets in the Iraq War. Hend Ayoub as the mother moves from the statement made by her Hermes-like lock bag to a burka. She is reviled by her own community for speaking English. George had to learn Arabic on his own.  Iraqi Muslims say the father betrayed his own people. Americans blame her for 9/11.

George and his mother speak in English and Arabic.  Sometimes Arabic is translated in supertitles on the wall behind us. When it is not, we still get the gist of the conversation from tones of voice and body language. His friend and manager Marina is also an Arab American Muslim, but she grew up in an isolated community near the edges of Dearborn, Michigan and became a Christian.  Olivia AbiAssi as Marina dances on a dime as she tries to defend her American Arab Muslim-ness.

Passing is also a current topic.  Consequences of being a fair-skinned black, or having your skin dyed white as possible are raised in Black No More and the film Passing.  Both characters in these productions die when they are outed. This is not a simple process.

Coach Fitzgerald rises to the occasion by suggesting that there is a right moment. The readiness is all. His ambivalent position is a perfect platform  not only for George’s understanding of the act he proposes, but for an audience of football fans who have seen playing fields turned into sites for political protest.  Fitzgerald describes the importance of football in America as the quintessential American game, but also the game that brought us out of the depression and into the good times of Eisenhower.

We are on the edge of our seats as George is challenged by the coach, his manager, and his mother. Will he or won’t he kneel and pray as the national anthem is played and the Big Game begins.

Coach Fizgerald talks about timing;  Timing in the game and timing to most effectively make a point about the treatment of minority ethnic groups.

A recent FBI report shows that hate crimes have surged in this country. George’s quandry is a real one.