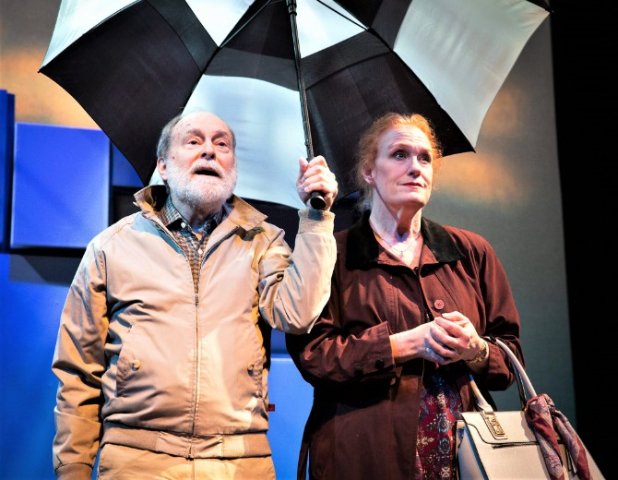 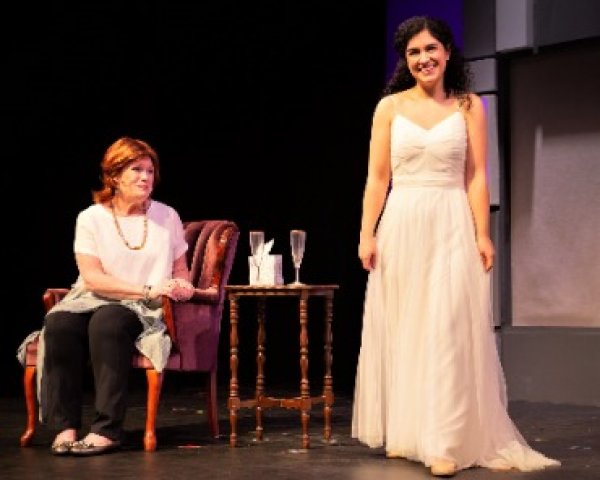 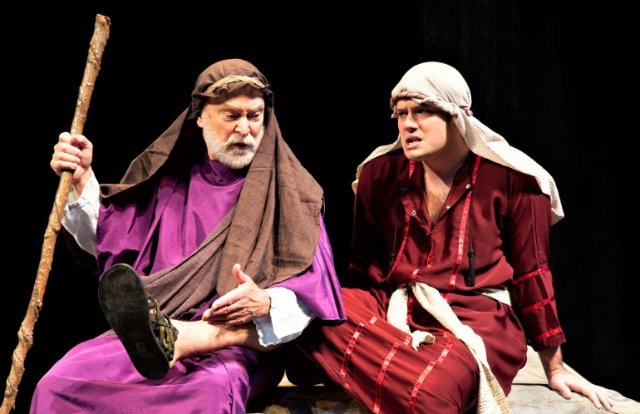 How through God's will Abraham almost killed his kid.

During the dead of winter, the arts in Pittsfield come to life with a festival. This is the 11th year of the annual 10x10 New Play Festival at Barrington Stage Company. The works were selected from some 200 plus submissions many of which trumped Trump.

The directors, Julianne Boyd and Matthew Penn, however, opted for succinct comedies. Given the gloom of winter, the third year of pandemic, and as it happens, war between Russia and Ukraine, that proved to be the right decision. There was in fact one overtly political play which was a welcome dash of vinegar to offset all that confection.

As a sage put it, however, it’s better to laugh than cry.

Yet again we took the measure of ten minutes. It either passes in a hilarious flash or can be as slow and tedious as watching paint dry. In this format that passes with another and another and another. We are a bit dizzy as we spin out of the theater.

Another given of this format is the multiple roles of the cast of: Aziza Gharib, Doug Harris, Matt Neely, Kelsey Rainwater, Peggy Pharr Wilson, and Robert Zukerman. They do double and triple duty and then some.

The major change this year was the switch from the intimate St. Germain theatre, which is undergoing renovation, to the larger Boyd-Quinson Stage. That’s a lot of space to fill for primarily quick changing two-handers.

There was a masterful set and lighting design that provided both unique changes of mood and color as well as uniformity. It entailed a large, free standing, constructivist sculpture/set. In the center it filled about a third of the stage. Installed by scenic designer, Joseph F. Martin it was reconfigured from Brian Prather’s 2019 set for Time Flies and Other Comedies. It has an irregular surface of boxes of varying scales and projections from the surface. Some of these are backlit as well as the scrim by Lucas Pawelski. The changes of mood and color were as much anticipated as the next play.

The afternoon got off to a gala bang with the ensemble performing a capella Opening by Matt Neely in a sprightly song and dance. The theme conveyed the joy of being back on stage after two years of waiting for a casting call. We could feel their agita.

That set the mood for more lively theatre to come. But such was not to be. Artistic director Julianne Boyd, entering her final season, stood before the stage and greeted the audience. In the past she introduced  plays but this time interrupted one and brought that wonderful opening momentum to a disconnecting halt.

Fortunately, the brilliant pairing of veterans Peggy Pharr Wilson and Robert Zukerman brought the energy level back on track with Stealing a Kiss by Laurie Allen. They meet at a bus stop. He’s all mouth and she’s initially mum and indifferent. That quickly changes, well they have only ten minutes, and so it goes.

As it is with such theatrical potpourri it was a struggle to stay on the scent. Love Me, Love My Work, by Glenn Alterman, wafted of an ersatz play within a play and whether or not to delete a character. It was more tepid toilet water than perfume. With more of the same from Doug Harris and Kelsey Rainwater in Steven Korbar’s Honestly a tale of lovers on the cusp. It was difficult to feel engaged.

We were riveted back to attention with the poignant Gown by Robert Weibezahl with Wilson, Aziza Gharib and Kelsey Rainwater. A mother, Wilson, and daughter Gharib are trying on wedding gowns under false pretenses. It is quickly revealed, there were go again with beat the clock, that the mother is dying of cancer and wants to see her daughter as she will one day appear at her wedding. There wasn’t a dry eye in the house.

Zuckerman came romping back as Abraham in a goof on the Biblical riff of An Awkward Conversation in the Shadow of Mount Moriah by John Bavaso. Doing God’s will he has almost knifed his son Isaac (Harris). I always wondered about that. The father and son give it a good twist. This was a winner.

After intermission, that compelling couple of Wilson and Zukerman were back with Escape from Faux Pas by Cynthia Faith Arsenault. They are throwing a cocktail party for neighbors in an upscale retirement community they have just joined. It seems that Harold has ripped open an Amazon shipment mis-delivered to their new home. The twist is that it’s filled with sex toys. How to resolve this dilemma makes a nice little vignette.

It’s best to be well versed in literary plots to comprehend Liars Anonymous by Ellen Abrams with Matt Neely and Gharib. While swearing to tell the truth, the whole truth and nothing but the truth they lay down some whoppers. The well educated ear will laugh at recognizing Jane Eyre or Moby Dick. The bit ends with a hint of Who’s Afraid of Virginia Woolf.

Misfortune by Mark Harvey Levine is set in a Chinese restaurant. The fortune cookies mandate the she will murder him. Asking for more and more cookies it goes from bad to worse with a riotous conclusion.

In Climax by Chelsea Marcantel three people examine their relationship. Outside a restaurant old lovers wait for her husband to return with the car. Much ensues in a short time and when he pops up delivers the last line “What did I miss?” Oops.

Cleverly, the ensemble returns for a finale in The Voice of the People by Cary Pepper. It seems that the candidate for mayor made a point of not campaigning and snubbing the media. With changes of hats and attitudes a TV reporter asks who they voted for. Their votes for Smith say a lot about the current state of politics.

Now that we have had a winter fix we will have to wait until June for more theatre in the Berkshires.