Beauty and the Beast

At the Lauderhill Performing Arts Center in South Florida 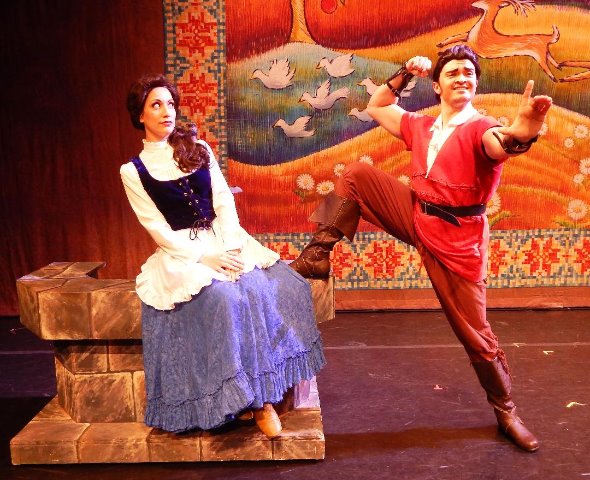 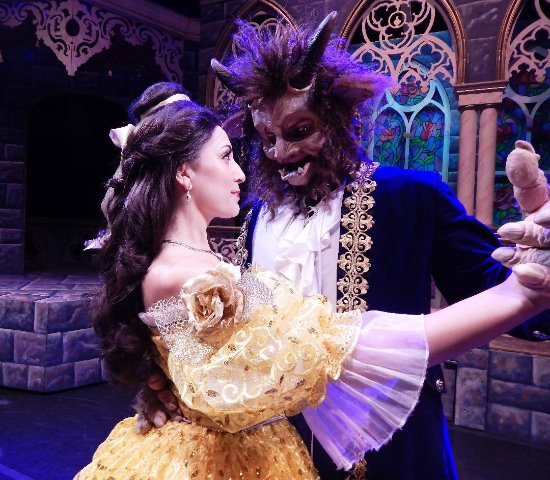 Photo by Carol Kassie Belle and the beast, played respectively by Rebecca Rene Kelly and James Arthur Douglas, dance with each other.

With incidents of bullying and resultant suicides in the news, it’s an appropriate time to mount a production of Beauty and the Beast.

Sure, colorful characters and visual delights populate this musical, based on the beloved 1991 animated Disney film. It should be enough to keep the kiddies attentive, introduce them to live theater’s magical power, and hopefully make them life-long theatergoers.

However, this show, which ran on Broadway for 13 years, can also teach older children, teenagers, and adults important lessons. They include the importance of valuing the worth and dignity of everybody, such as those who may look or act differently.

A playful, touching and funny production of Beauty and the Beast runs through March 8 at the Lauderhill Performing Arts Center. The production marks the final collaboration of the season between the center and Ft. Myers-based Broadway Palm Dinner Theatre.

While watching Beauty and the Beast, one wise man’s saying might spring to mind. Atticus Finch from To Kill a Mockingbird, says, “You never really understand a person until you consider things from his point of view…until you climb into his skin and walk around in it.”

And while you’re “inside” someone’s skin, you might discover a kind heart and soul.  Indeed, the beast possesses a soft-hearted interior. It belies his unsightly, perhaps even frightening exterior.

People have observed that humans and some animals possess a dual “man-beast” nature. Such shared traits become obvious not just with the creature in this show, but with Gaston. He might be the true beast in the story.

Sure, his rock star-like demeanor may cause admiring girls to swoon. But Gaston is also an arrogant, narcissistic bully.

This is how Robert Ayala portrayed the character during the reviewed performance. While Ayala is an understudy for Gaston, he did an admirable job playing this humorous villain.

The dark-haired Ayala, sporting a pony tail, gestures with a flourish. He also moves suddenly and rapidly. In fact, with each slick jerk, admiring girls pretend to nearly swoon. Ayala’s self-loving, commanding Gaston, with arched eyebrows, proudly flexes his muscles. Meanwhile, his eyebrows lower and his mouth curls into a fierce, competitive expression during other moments.

Ayala has a strong singing voice. It helps him command the stage during such numbers as the appropriately titled “Me.” The song reinforces his conceited personality. Meanwhile, Ayala’s Gaston basks in adulation while his sidekicks shower him with admiration. They do so during a song whose title bears the character’s name.

Come to think of it, you have to search hard to find a redeeming quality in Gaston. No doubt, #MeToo advocates will find his actions abominable. So, too, will they disapprove of his words. They include gasp-inducing lyrics in “Me.”

In general, Beauty and the Beast has a #MeToo problem. For instance, Gaston fights with the beast for Belle as though she’s a prize. Chances are, advocates within the women empowering movement aren’t likely to be happy.

Meanwhile, during scenes that smack of melodrama, the beast treats Belle harshly. In fact, he’s a frighteningly menacing creature with short, sudden and scary outbursts of temper. As James Arthur Douglas portrays him, the character roars at least once, although not as often as other beasts I’ve seen. But credit Douglas for seamlessly transitioning from a rough, unrefined, yet tortured creature to a tender-hearted, kinder being.

And Douglas credibly portrays sadness without turning the beast into a self-pitying character. With Douglas’ strong, eloquent voice, his beast’s rendition of “If I Can’t Love Her” might bring you to tears. He exposes the Beast’s tortured soul in a credible manner; it doesn’t feel forced.

Force, confidence and assertiveness are characteristics associated with Rebecca Rene Kelley’s Belle. The performer combines these traits to create a strong female character.  Fortunately, Kelley is assertive when she needs to be. She puts Gaston and the beast in their place when they mistreat her.

On the other hand, Kelley radiates charm, dreaminess and enthusiasm, all of which win us over as much as Belle’s tougher traits. In addition, Kelley acts persuasively frightened when, for example, Gaston and his cronies threaten her father, Maurice (a sincerely loving yet somewhat scatter-brained Peter Librach).

Kelley is blessed with a lovely, expressive voice. It helps deepen her character. “No Matter What,” her duet with Librach, is tender and touching without being too sentimental.

It’s the latter who sings the title song, perhaps the musical’s best-known number. And Connolly’s voice radiates warmth during this tender song.

But unquestionably, the show-stopper is the vibrant and catchy “Be Our Guest.” The performers begin slowly and pick up the tempo until it’s a rousing number. Perhaps, it will move you to clap along, or even get up and dance.

Speaking of dancing, the performers execute director and choreographer Amy Marie McCleary’s creative moves with energy and attention to detail. It quickly becomes obvious that the cast members are in synch with each other as they dance. A clear, strong, yet not over-powering live orchestra backs performers as they sing the Alan Menken, Howard Ashman, Tim Rice and Linda Woolverton varied score with rangy, expressive voices.

Behind the scenes, costume designer John P. White illustrates the dual man-beast nature by dressing the creature in clothes that suggest an animal and a human.

White’s other designs, including glistening, gorgeous outfits, are equally effective in defining character.

The action plays out on scenic designer Chris Peters’ storybook-like set, which is brighter than the severe grayness of the beast’s castle.

Also, credit lighting designer Chris McCleary for illuminating the set and performers with hues that reinforce the musical’s non-realism. The designer’s use of hues is effective in capturing auras.

Director McCleary places the necessary emphasis on tender and heartfelt moments. Also, she milks this production for all the energy, playfulness and comedy that she can squeeze from the show. It helps, of course, that these cast members nail comic timing.

McClearly, who paces the show well, also knows how to highlight characters. For instance, she often has Gaston stand atop structures, reinforcing the fact that he feels above everyone else.

The production begins and ends with a father reading the tale from a book to his children. It’s an appropriate framing device; Belle loves books and  fortunately, many folks  hope to introduce reading and live theater to youngsters.

The biggest production weakness is the fight choreography. Gaston fools nobody when he clearly punches air instead of making us believe he’s hitting other characters. And the fact that they react to the air punching makes the fighting scenes look ridiculously fake.

But make no mistake. Some of these characters may be eccentric, but they possess true feelings. They strongly desire that the spell at the tale’s center be broken in order for them to become “human again.”

There are many ways to identify with and interpret Beauty and the Beast.

Without question, we all desire for others to treat us with dignity. And we hope that our humanity shines through when we interact with others.  Also, we might discover the “beast” within us after witnessing this show. Then again, some may interpret this musical as “My Fair Gentleman.” The castle’s inhabitants try to turn the beast into a gentlemanly individual with proper, non-primitive habits. It can be funny. But at the same time, it can also make us consider our own habits and how we interact with people.

Regardless of which lens through which we view Beauty and the Beast, this beloved musical remains a funny, fun, touching and timely theatrical treasure.

Lauderhill Performing Arts Center and Broadway Palm’s co-production of Beauty and the Beast runs through March 8. Ticket prices range from $35 – $55 and are available online at https://lpacfl.com or by calling 954-777-2055.  Performances are on Thursday, Friday, and Saturday at 7:30 pm, and Wednesday, Saturday, and Sunday at 2 pm. The theater is located at 3800 NW 11th Place in Lauderhill. Note: Parents may want to be aware of the potential for certain scenes to frighten toddlers.