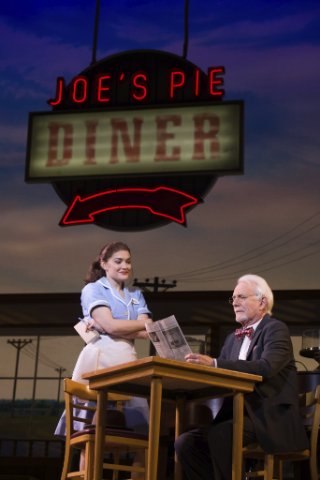 (Photo by Scott Martinez) Jenna (Christine Dwyer) waits on diner owner Joe (played with crustiness but likability by Richard Kline) in an equity national touring version of the musical Waitress. 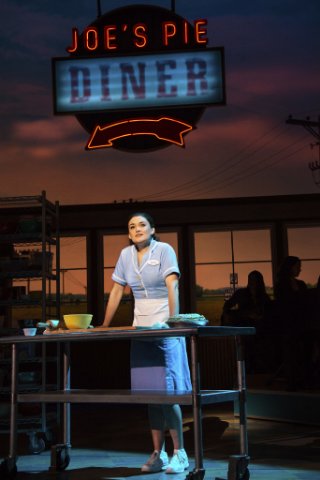 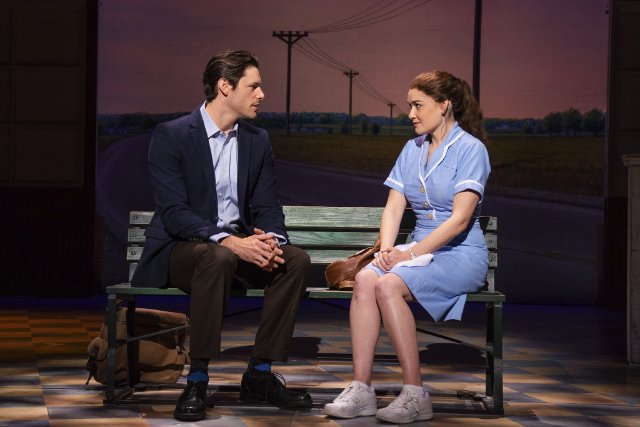 Certainly, her new-found confidence and nerve inspire many in the Tony-nominated best musical Waitress. In particular, one scene should empower many women to discover their inner strength.

It’s no surprise that audience members applauded recently after waitress/baker, Jenna, told off her abusive husband.

“You go girl!” those audience members essentially said during a performance in Miami as part of a national equity tour. This uneven production is playing South Florida venues before heading north.

Nobody will confuse Waitress with Hamilton. Even so, the live adaptation of the 2007 Indie film is inspiring and sweet, but not saccharine. Further, its ingredients include heart, humor (some of it corny) and humanity.

The musical, by book writer Jessie Nelson and composer/lyricist Bareilles, is a faithful adaptation of the late Adrienne Shelly’s dark movie.

The screenplay and musical are about the healing, freeing power of creativity. In addition, both focus on the power of friendship (sisterhood, in particular, a la Steel Magnolias). But at its heart, this show is about finding the fortitude to speak your own mind and free yourself from abuse and suffocation.

The second act, more than the first, mirrors the darkness of the film. In particular, we more keenly sense the threat that controlling husband Earl has on Jenna’s life, hopes and dreams.

Of course, Jenna’s immediate goal is to leave Earl. But he basically maintains an iron grip on her.

Thankfully for Jenna, she’s able to escape, however briefly, at Joe’s Pie Diner. There, she finds strength not only in her friendships with her fellow waitresses, but in baking and naming pies. The titles she gives her delectable desserts are based upon tough situations she experiences at home. Hey, at least it gives her temporary outlet through which to take out her frustrations.

The musical is set in Jenna’s mind as much as in reality, during an unspecified time, somewhere in the South.

Surely, a story which includes a character’s inner thoughts is ripe for musicalization. And to be sure, Bareilles is gifted musically. After all, she has earned seven Grammy Award nominations.

But Waitress marks Bareilles’ debut writing for the theater, and it shows.

For instance, the song “What’s Inside” could’ve given us more insight into Jenna’s thought process as she bakes and names her pies. The lyrics are rather pedestrian. On the positive side, a dream-like, echoey voice repeats the words “Sugar,” “Butter” and “Flour.” Perhaps, through these words, Jenna escapes into a sweeter, smoother, albeit imaginary existence.

More curious is a song involving a subplot about the love affair between another waitress, Dawn, and the comical Ogie. The title: “I Love You Like a Table.”

The lyrics, which contain a tired metaphor, don’t impress, either.

Perhaps the strongest song is a powerfully emotional, introspective number, “She Used to Be Mine.” Through it, Jenna reveals her complexity and how she no longer recognizes herself.

“It’s not simple to say that most days I don’t recognize me,” she sings.

The number starts out soft and grows in intensity. Ultimately, through the song, a confident Jenna conveys a swagger and defiance we hadn’t seen up until this point.

Undoubtedly, singing “She Used to be Mine” is one of the highlights of Christine Dwyer’s mostly solid performance as Jenna. Dwyer doesn’t just sing the piece, but sincerely and intensely lays bare her innermost feelings through it. Impressively, her Dwyer’s rendition of the song doesn’t feel forced.

Meanwhile, Steven Good conveys an awkward attempt at likability as Jenna’s eager-to-please, enthusiastic gynecologist, Dr. Pomatter. We’d forgive her for taking a liking to him. But, when you consider that she knows that he’s married, it becomes harder to root for either character. Further, their sudden, intense love scenes are implausible.

Moreover, it’s hard to believe that Pomatter’s wife would show up to the hospital to visit Jenna immediately before she gives birth.

And somehow, the doctor doesn’t seem like the kind of guy with whom Jenna would want to marry. Then again, one might say “anybody but Earl.”

Speaking of the piece’s villain, Matt DeAngelis is creepy in the role. With frightening eyes, a thunderous temper, a quiet menace and an arrogant demeanor, DeAngelis makes Earl a narcissistic brute. Therefore, you want to clap extra hard, in his face, when Jenna finally tells him off.

DeAngelis’ performance stands in stark contrast to Jeremy Morse’s Ogie. The actor makes this persistent, quirky character lovable and sweet in a tour-de-force performance. That is, thanks in large part to the patter-like, upbeat song “Never Ever Getting Rid of Me.”

Their romance is one of the musical’s subplots. It might seem like extraneous material, except that Ogie is a Revolutionary War enthusiast. This fact positive affects Jenna.

“I don’t really feel I understood the Declaration of Independence ‘til now, Life, Liberty…and the Pursuit of Happiness Pie,” our heroin says.

“We could all use a slice of that,” another character responds.

And surely, Jenna could benefit from some happiness outside the pie shop.

And she gets it. For starters, the scene featuring the birth of her baby is touching. Not only that, we feel vindicated for Jenna when she finally summons up the courage to essentially tell her husband to go to hell.

Director Diane Paulus strikes the right balance between seriousness and humor, lightness and darkness. She directs with sensitivity and an attention to detail.

Designers Scott Pask (set) and Ken Billington (lighting) have created a striking backdrop of a rural landscape in the distance, beyond the open-air diner. It’s all gorgeous and appears impressively authentic. The striking set benefits from Billington’s colored lighting. It reinforces mood and suggests the time of day.

Waitress isn’t a splashy, big Broadway musical. Indeed, sometimes only a couple guitars accompany the performers as they sing Bareilles’ varied, yet mostly unmemorable score. In fact, it’s easy to envision this show playing in a much more intimate playing space than the Arsht’s large Ziff Ballet Opera House.

While Waitress is not a revelatory musical, it relies on a recipe for success. Its ingredients, which include a heartwarming, yet bittersweet surprise ending, should touch many audience members.

And surely, the #MeToo movement’s movers and shakers will take pride in the fact that this show features Broadway’s first all-female creative team.

The equity national touring production of Waitress might stop at a city near you in the near future. For information about venues, showtimes, dates and tickets, visit https://waitressthemusical.com/tour.