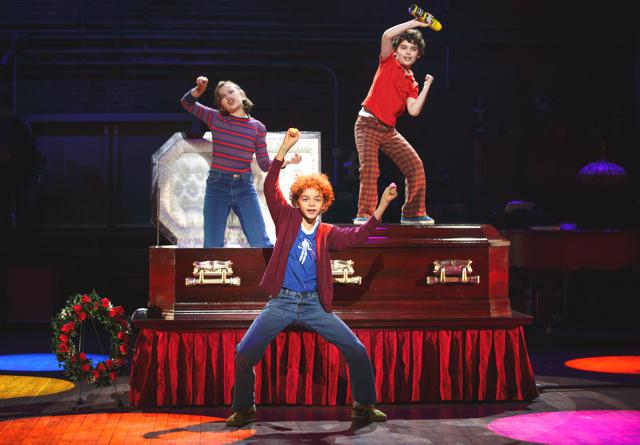 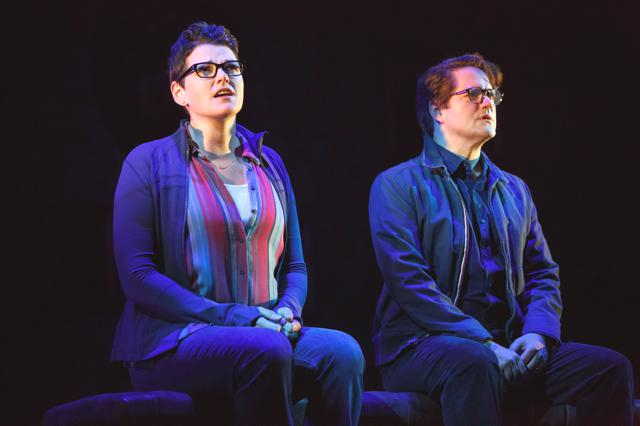 Kate Shindle as ‘Alison’ and Robert Petkoff as ‘Bruce’ 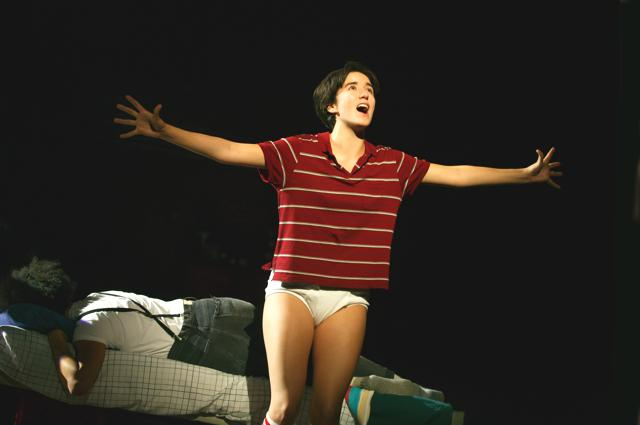 Abby Corrigan as ‘Medium Alison’ and Karen Eilbacher as ‘Joan’

The ‘boys’ won Tony Awards in the 80s with such gay-themed shows as “Torch Song Trilogy and nabbed another with the musical “La Cage aux Folles “(1983), and yet another, with the blockbuster musical hit “Kinky Boots” in 2013; all from the creative brain of Harvey Fierstein. Now it’s the ‘girls’ turn in the first decade of the 21st century to begin collecting Tony Awards. First and foremost is the success of the 2015 Tony Award winner “Fun Home”, based on the graphic novel by Alison Bechdel, with music by Jeanine Tesori and lyrics and book by Lisa Kron.

The musical’s national tour production, now on the stage of The Ahmanson Theatre, is an eye-opening and somewhat of a ground-breaking production, in that it tells the story of a gay young woman’s sexual awakening in a troubled Pennsylvania family. American families have been dealing with gay children not knowing how to “come out” to their parents or society in general, for years. For me, “Fun Home” should be required reading or viewing for all parents, relatives, and education professionals who interact with students. I’m no health professional or an academic, but it appears to me that “Fun Home”, comes across as a pretty good vehicle for a ‘Sexual Identity Course 101’, help aid.

The intriguing and compelling story, brilliantly directed by Sam Gold, becomes all the more revealing when everyone has an opportunity to view, up close and personal (even in a theatre setting) the emotions of young people who do not understand what is happening inside their bodies, and who only know that they feel estranged, in some way, from society.  The biggest fear of course, is the fear of rejection and stigmatization on the part of their parents and friends. Without some guidance that is a very scary prospect indeed.

Director Gold cleverly employs cinema techniques in the telling of the “Fun Home” story.  Through flashbacks and flash-forwards, Kate Shindle narrates for the audience the character of Alison (Alison Bechdal’s alter-ego). We see her at various stages in her life:  Small Alison, an elementary student wonderfully played and sung by Alessandra Baldacchino, and Medium Alison, an astonishing Abby Corrigan, as a high-school senior entering college, who, when she meets classmate Joan (played by Karen Eilbacher), she falls head over heels and has an epiphany as to her sexuality.

When Alison in flashback discusses her home life growing up, we meet her Father Bruce, (Robert Petkoff in a finely judged performance), a closeted gay man who loves his wife Helen (steadfastly and knowingly played by Susan Moniz) and his three children: Alison, John (Lennon Nate Hammond) and Christian (Pierson Salvador), but handyman Roy (Robert Hager) also has Bruce’s attention.  The story that takes place on the Ahmanson stage, and I’m guessing here, is probably not that much different from what takes place in the homes of families all over the world.

Despite the emotional content of the story, “Fun Home”, is after all, a winning musical with singing and dancing, and lots of light comedy moments.  The beauty of the production lies in the compelling and poignant performances of the cast.  The opening night audience was definitely on the wavelength of Alison Bechdel, Jeanine Tesori, and Lisa Kron.  Every nuanced scene and innuendo that the straight audience couldn’t decode, brought knowing smiles and on-the-nose laughter from those in the audience as having ‘been there, done that’ too.

Director Gold’s staging of his three ‘Alisons’ is somewhat analogous to cinema’s ‘dream mode’, in that the characters can see themselves in a scene or sequence while the action in the story unfolds.  It’s very effective and helps the audience to keep track of all the moving parts in the production in perspective.

Gold’s creative team led by Scenic Designer David Zinn, who also designed the Costumes delivers the goods in both disciplines. The Lighting Design is created by Ben Stanton and the Sound Design by Kai Harada, along with Hair and Wig Designer Rick Caroto, complete the team.  Music director Micha Young, along with Orchestrations by John Clancy and Music Coordination by Antoine Silverman and a nine-person orchestra, put the finishing touches on this splendid and entertaining production.

“Fun Home” performs at The Ahmanson Theatre and runs through April 1, 2017.