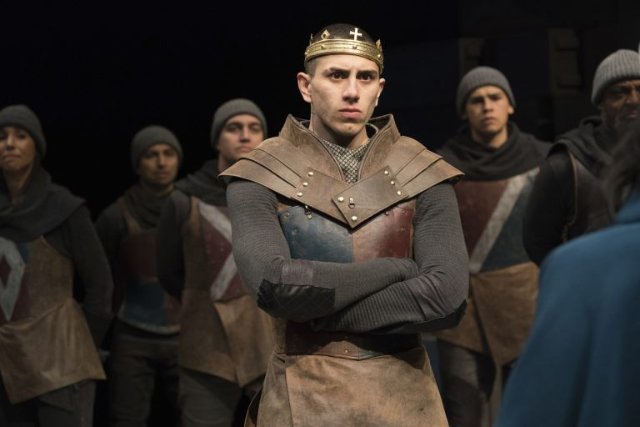 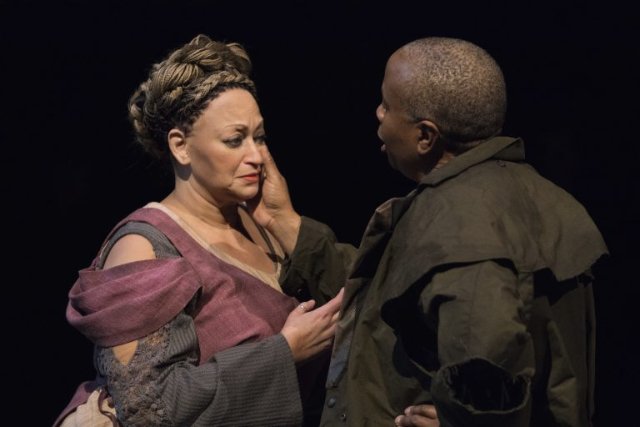 Shakespeare’s history plays may be a source of pride to many British, as they rank in high esteem as great literature and language. However, most of them involve internecine clashes within the British community – cousin versus cousin, English versus Scots, entrenched versus dispossessed. Henry V stands as one that has been a source of British patriotism, as it relates to the English vanquishing their former perennial foe, the French. In fact, the 1944 movie version directed by and starring Lawrence Olivier was positioned as WWII morale building propaganda and was timed with the Normandy invasion – this notwithstanding France being an ally throughout the 20th century. But as evidence of the play’s ambiguity, Kenneth Branagh’s treatment of the same text in his 1989 film focuses on the horrors of war.

Oregon Shakespeare Festival has cleverly organized the productions of the three plays which involve King Henry V. Two were offered last summer – Henry IV – Part 1 and Henry IV – Part 2. In those plays, one of the main characters is Prince Harry, also known as Hal, who would become King Henry V. Despite being heir to the throne, Hal was a dissolute wastrel who consorted with Falstaff and his derelict followers.

The action of this play concerns the preparation and execution of the plan to invade France to reclaim land previously under British royal control. War is followed by Henry’s wooing of Princess Katherine of Valois. Within the battle sequence at Agincourt, Henry delivers his famed St. Crispin’s Day “we happy few, we band of brothers” call to glory speech which so resonates with his countrymen centuries later.  Sadly, as an antecedent to Bob Dylan’s satirical “With God on our Side,” Henry professes Divine partiality by proclaiming that “God fought for us.”  Despite supposedly overwhelming troop strength, the French are defeated, and the ratio of French to English soldiers lost is of fairy tale proportions. Moreover, the English guy gets the French girl. What’s not to be proud of?

The thematic heart of the narrative confronts Harry at the beginning. The invasion of France is without provocation. Its pretext derives from the right of royal succession. France has adopted Salic Law, by which succession proceeds patrilinealy, but the Archbishop of Canterbury persuades Henry that Salic Law is unsupportable in France (too complicated to discuss here), but that Henry has claim to the French throne through his great-great-grandmother who was daughter to French King Philip IV. This urge to battle is viewed a stain on Henry’s brief reign – he died only two years later. Not only was justification to attack flimsy in its time, modern judicial activists have found it so insufficient that a number of mock trials have been held trying Henry for war crimes.

With the production of Henry V this summer, OSF audiences see the transition of a seemingly lost soul into the leader of a fighting force that would win glory for England, and beyond that, become the respected monarch of an empire. In a casting coup, OSF was able to retain many of the actors from last year’s Henry IV productions, and most importantly, the stunningly powerful Daniel Molina has returned as the title character. In his immaturity, Molina’s Hal is a peacock with long curly hair and a carouser, flipping off the bon mots and challenging all boundaries. As the young King Henry V, though plagued by inexperience and uncertainty, he is focused and purposeful, fully aware of the gravity of his actions. Symbolically, the beautiful mane of his adolescence is shorn.

In keeping with Shakespearian tradition, minimalism drives the set in Henry V, but the overall staging is stunning. At the rear of the thrust stage, a single rampart stands, composed of gray, Lego-like boxes the sizes of orange crates and coffins. Those same decorations act as moveables to define everything from tables to walkways. The explosive sound and low but aptly manipulated illumination contribute to an unsettling ambiance befitting the circumstances. Notably, battle scenes are deployed without replicas of weapons. Instead, bright red shirts are used both to represent swords and blood, and the choreography of their contrast with the gray and sepia surroundings visually astounds.

In addition to finely orchestrating stage effects, Rosa Joshi directs a fine cast with assurance. Apart from Molina, perhaps the most striking performances come from Jessica Ko’s multiple roles, including her depiction of Katherine. Her great instinct for effective kinesthetics and her charm whether speaking French or learning English is delightful. Kimberly Scott also stands out in several portrayals.  The use of American accents throughout, except for the French characters, makes for more accessible portrayals with better audience comprehension and should not be considered a downgrade from the use of British pronunciation.

“Henry V” by William Shakespeare is produced by Oregon Shakespeare Festival and plays at its Thomas Theatre at 15 S. Pioneer St., Ashland, OR, in repertory through October 27, 2018.