William Inge’s A Loss of Roses 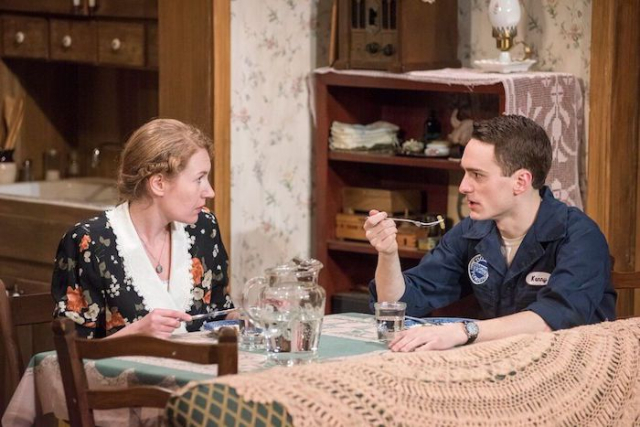 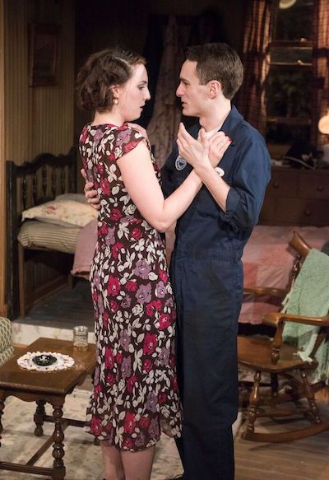 William Inge’s A Loss of Roses at Raven Theatre explores the lives of three people in a small Kansas town in Depression-era 1933. The play, directed by Cody Estle, provides an up-close look at the lives of people making it through difficult times. Raven’s production is beautifully staged and well-acted but Inge’s script is not a dramatic masterpiece. It’s a quiet story that takes an honest look at real people.

Helen (Abigail Boucher) is a widow and mother of 21-year-old Kenny (Sam Hubbard). The two eke out a living from Helen’s wages as a nurse and Kenny’s work at a service station. They keep their small house but have no money for luxuries; Helen’s religious activities are her only recreation. Their lives are totally disrupted when Helen’s old friend and Kenny’s babysitter, Lila (Eliza Stoughton), arrives to visit and to take care of housework and cooking while she’s there.

Lila is a 30-something actor and showgirl and brings a taste of glamour to the quiet lives Helen and Kenny are living. We get an insight into Lila’s life when she arrives, accompanied by other actors in the traveling tent show. She introduces Ricky (Joel Reitsma) as the villain in their shows and he plays the role with a dark, glowering presence. He’s also Lila’s boyfriend. Mme. Olga St. Valentine (Barbara Roeder Harris) is the flamboyant aging star who plays against Lila’s ingénue. They leave for Kansas City, Ricky promising to find work.

Now we begin to learn the backstory behind the characters’ relationships. Helen’s husband, big Kenneth, died trying to save young Kenny from drowning. Helen’s demeanor is sad and resigned but she rejects the affection and gifts Kenny wants to give her. Kenny, despite his affection for his mother, resents her memories of his father and in some ways, tries to take his place.

“I’ve always tried to help you since Dad died, haven’t I? Since I’ve been old enough. I do all the things around here that he’d do, don’t I? I mow the lawn and take care of the furnace and burn the trash. What’d you do without me?”

Kenny and Lila explore their new relationship. They find their age difference has melted away and they are romantically and sexually attracted to each other. Lila has a history of emotional problems, including being institutionalized.

In that era, both Helen and Lila are supposed to have men to take care of them. Helen gets along, relying on her job, her son and her religious faith. Yet her son Kenny says he “feels sorry for her without a man to take care of her.” He wishes she would stay home so he could take care of her, but ultimately, he is drawn to the lure of another life.

At the end of the play, Lila, the beautiful showgirl, says, “I’ve lived my whole life thinking some wonderful man’d fall in love with me some day and marry me. I guess it’s all just another one of those childish illusions the doctor warned me about.” And so she goes off to an uncertain future with Ricky.

The three lead actors are excellent in their roles. Boucher is sad and dignified as the bereaved widow, keeping it together for herself and her son. Hubbard is very believable as the young man dissatisfied with the course of his life. Stoughton really shines as Lila—in her exuberance, heartache and lack of self-esteem. She shows us a completely different style from her delightful performance as the frolicsome Jane in Remy Bumppo’s recent Fallen Angels.

Jeffrey Kmiec’s setting is a modest bungalow, including outdoor space, kitchen, living room and bedroom. Director Estle’s blocking and use of space makes us believe in Kmiec’s invisible walls. Mary O’Dowd’s set dressing is true to the period, even including what is surely an authentic crocheted throw over the sofa. Christopher Kriz’ sound design includes original and period music, tuned to the action and intermission.

William Inge, author of a string of successful plays in the 1950s, was known for his depictions of midwestern small-town life in Come Back, Little Sheba; Picnic; Bus Stop; and The Dark at the Top of the Stairs. He had a special sensitivity about solitary female characters such as the spinster schoolteacher in Picnic, the waitress in Bus Stop, and the housewife in Come Back, Little Sheba. Helen and Lila in A Loss of Roses are perceptively drawn characters in this repertory.

A Loss of Roses, first produced in 1959 with poor reviews and a short Broadway run, is not often produced today. There’s usually a reason why a rarely produced play is rarely produced. While the characters and their stories keep our attention, Roses moves slowly and is rather flat in its emotional impact.

Inge wrote in his introduction to the published play, “it deals with individuals, who, like people today seeking an inner peace in the midst of terrifying social change, must come to deal with evil in their lives, either to be destroyed or to find themselves strengthened.”