This Bitter Earth at TheaterWorks 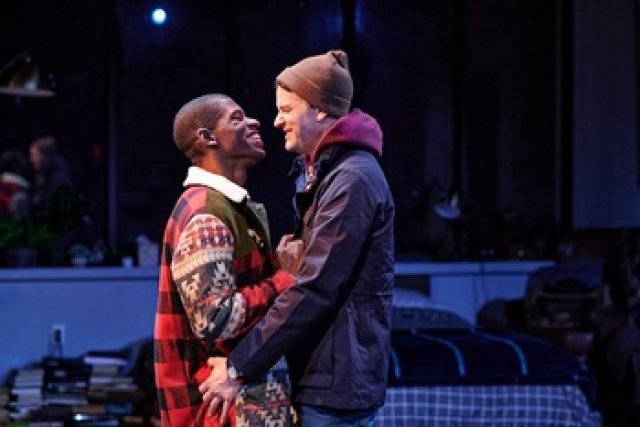 This Bitter Earth which is now at TheaterWorks in Hartford through Sunday, March 20, is like a puzzle.

It wasn’t until late in the play that I realized how Harrison David Rivers had structured this episodic work.

While I found it like a jigsaw puzzle, I still enjoyed it. It was beautifully acted and directed and engaged me for its entire 90+ minute length. It’s just that I wasn’t quite sure what I was watching.

Neil and Jesse are two gay men who meet in NYC in 2012. This Bitter Earth shows us the story of their relationship through 2015.

The two are similar – both bright and articulate 20-somethings. But they are very different. Jesse (played by Damian Thompson) is a scholarship student at Columbia when they meet and goes on to graduate school in St. Paul. He grew up in the Midwest in a conservative African-American family; his father is a Baptist preacher. Neil (Tom Holcomb) lives in a brownstone in Brooklyn, has a trust fund and dropped out of university to be an activist, particularly in the Black Lives Matter movement. They meet at a rally in Washington Square Park where Neil ends up addressing the crowd from the lap of a statue of George Washington. Jesse had been dragged there by his roommate.

They have one enduring conflict; Jesse’s disinterest in participating in the marches, rallies and protests so dear to Neil’s heart. One of their biggest arguments is when Neil leaves for five days to go to Ferguson, Missouri to support the people there. He is often going out the door to a protest or march.

Jesse wants to just live his own life, completing his graduate studies, finishing his play and teaching his students.

He’s had his own racist and homophobic encounters.

We meet them at the very beginning of their relationship, but from then on, the play hops from one location to another and one year to another. It is one of the problems that we are never quite sure where we are – NYC or St. Paul – or what year it is unless we can date the various protests and killings that Neil talks about. In addition, some of the brief scenes are repeated multiple times.

The technique makes perfect sense when, by the end of the play, you realize what Rivers is doing. But during the play, you can be distracted trying to figure out when something takes place. It isn’t helped by the single set beautifully designed by Riw Rakkulchon of the bedroom of an apartment. The bed is the central feature. At times the actors enter the apartment from one side of the stage and other times, from the other. Is that supposed to be a clue that they are in NYC or St. Paul?  But since it never changes – where are Neil and Jesse?

While the short scenes work well telling us the ups and downs of their relationship, it is less effective in presenting their point of contention: do we all need to be activists, particularly for groups that we are members of? Can we support causes in more ways than just protests and marches? And more specifically, what is the role of white Americans in the Black Lives Matter and associated causes? Where does the political end and the personal begin?

These get discussed in snippets of conversation with Jesse perhaps refusing to attend whatever protest is happening, and Neil looking disappointed or pained.

It would have been good to have these two intelligent characters hash out their differing views.

Both Holcomb (as Neil) and Thomspon (as Jesse) are excellent. They create nuanced characters despite it being difficult fully to see the arc of each character due to the constant jumping forward and back.

Director David Mendizábal has staged the play, including the love scenes, with delicacy without sacrificing realism.

This Bitter Earth is a thought-provoking play; both about relationships and understanding and about the limits of activism.