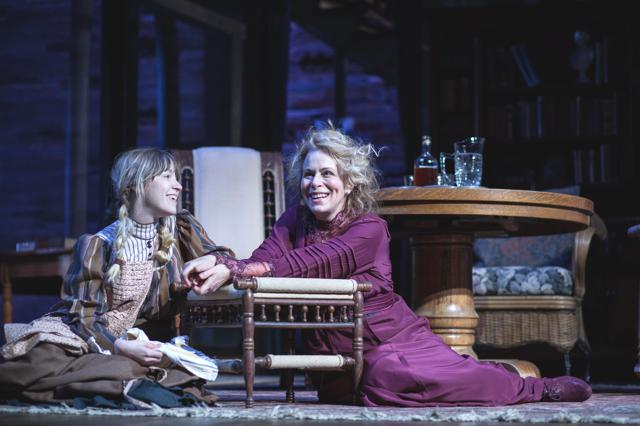 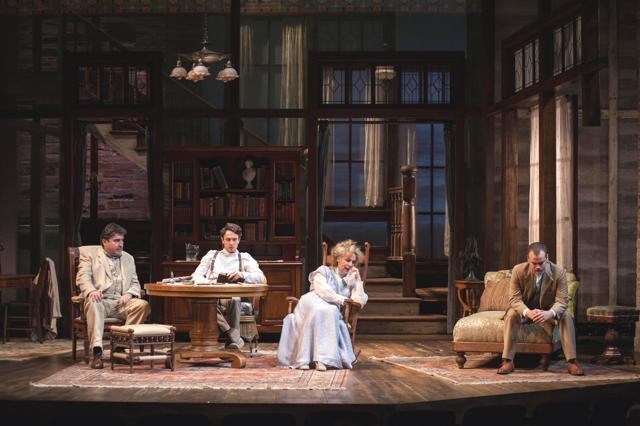 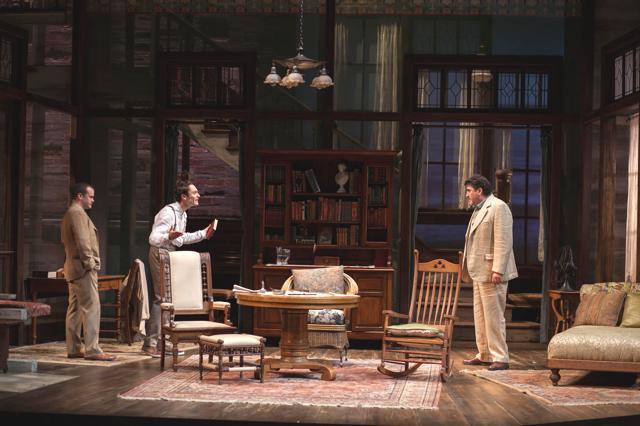 Eugene O’Neill became America’s first Nobel Laureate in Literature in 1936.  His canon of more than 30 plus plays, including four prestigious Pulitzer Prizes in Drama (the most wins to date), culminated in what is now considered to be his masterpiece “Long Day’s Journey into Night”, penned in 1953 and posthumously produced three years after his death in 1956.

O’Neill was a prolific but streaky playwright, who along with Arthur Miller, Tennessee Williams, and Edward Albie, were arguably the four greatest American dramatists of the 20th century.  There are those who say O’Neill plays, although groundbreaking at the time, didn’t keep up with an ever changing American experience.  This is one reason why many of his plays are not being widely produced anymore.

Fortunately for us, the Geffen’s Artistic Director Randall Arney, took on the challenge of producing O’Neill’s masterpiece.  Staged by acclaimed director Jeanie Hackett, this revival of “Long Day’s Journey into Night” features a stellar cast of gifted actors: the superb Alfred Molina as James Tyrone the family patriarch, the brilliant Jane Kaczmarek as morphine addicted Mary Tyrone, Stephen Louis Grush as the star-crossed and fated Jamie Tyrone, and Colin Woodell as young Edmund Tyrone (the alter-ego of Eugene O’Neill), a poet/writer battling tuberculosis and alcoholism, –  a Tyrone family trait. All the Tyrone’s suffer an addition of some form or other.

The story is set in August of 1912 in the Tyrone family’s summer home in New London, Connecticut. The creative Scenic Designer Tom Buderwitz, delivers a multilevel and functional New England style summer home that allows the actors plenty of space for their magic to take place.  Buderwitz’s design also displays on-stage nooks and crannies for the actors to be seen or momentarily hide depending on the mood of the situation.  And the mood-enhancing lighting by Lighting Designer Elizabeth Harper definitely renders that somber and melancholy mood of events taking place within the Tyrone family home.  The costumes designed by Denitsa Bliznakova are spot on for the early 1900’s time frame. Original Music and Soundscape Composed by Michael Roth, and Projection Designs by Jason H. Thompson complete the creative team.

Wags in the past have been known to say, that if the Englishman’s vice of that era was young boys, then the Irishman’s vice comes in a bottle or a keg of beer. And, there is definitely of a lot of drinking accompanying the rich and potent dialogue taking place on the Geffen stage. Although the production runs a little over three hours – with one intermission – the narrative flies  bye thanks to the stage presence of its four gifted actors that keep the audience fully engaged.

O’Neill’s characters are the epitome of a dysfunctional family.  A patriarch and actor/father James Tyrone who turned his one performance as an actor into playing the same character for more than 6000 performances; never fulfilling his promise to become a complete actor, is wonderfully portrayed by Mr. Molina.  Mary Tyrone the matriarch laid waste by morphine addiction following complications from Edmund’s birth, is sensationally played by Ms. Kaczmarek in a tour de force performance.

Jaime Tyrone (Grush) can’t let go of the alienation of his mother for years because he mistakenly thinks she secretly has always favored Edmund over him.  His answer to his parent’s behavior is to take to the bottle for surcease; stunting any chance of an acting career in the theatre just like his father. Mr. Grush brings an intensity and bellicosity to Jaime that signals that he is a volatile loose cannon and likely to explode at the slightest provocation.  One can also feel his mixed love-hate emotions concerning his younger brother Edmund.

Colin Woodell as Edmund Tyrone, delivers a finely nuanced performance as the brooding, poet and writer suffering from tuberculosis and alcoholism.  Edmund stifled by his home life, struggles to be free from the pressures of his dysfunctional family baggage that surrounds him at home, is nicely realized by Mr. Woodell.

O’Neill’s early life propelled him to expiate the “sins” of his family by creating melancholy characters in his plays that resonated with American audiences by employing the vernacular of the working and middle classes.  Arthur Miller followed the same path when it came to capturing those same audiences in his “View From the Bridge” and “Death of a Salesman” plays.

The wonderful ensemble cast that includes Angela Goethais as Cathleen, the young housemaid, who also has a ‘taste for the sauce’, work together like a well-oiled machine (no pun intended).

This splendid production of “Long Day’s Journey into Night”, seamlessly directed by Jeanie Hackett, performs on the Gil Cates stage at The Geffen Playhouse, and runs through March 18, 2017.