Destiny of Desire at Oregon Shakespeare 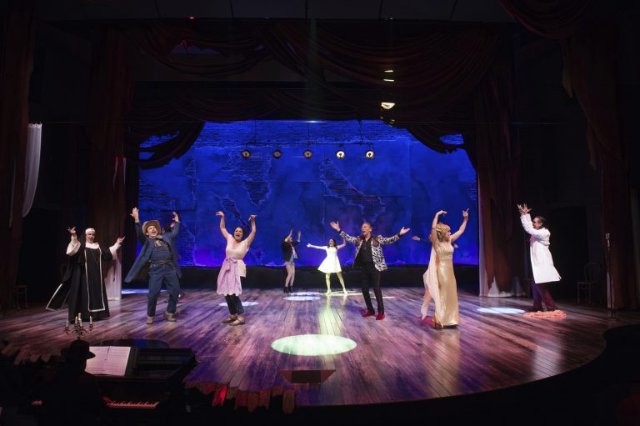 Cast. All photos by Jenny Graham. 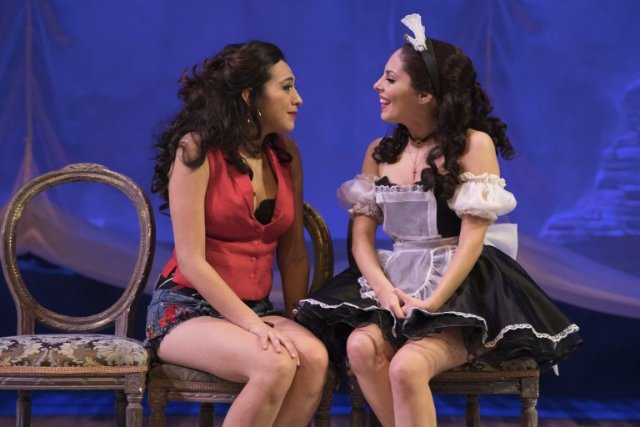 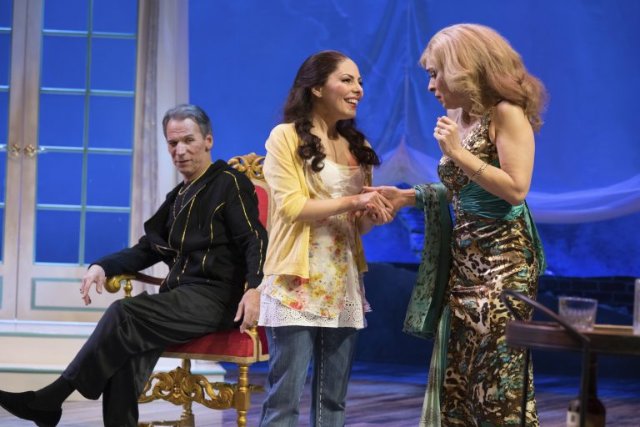 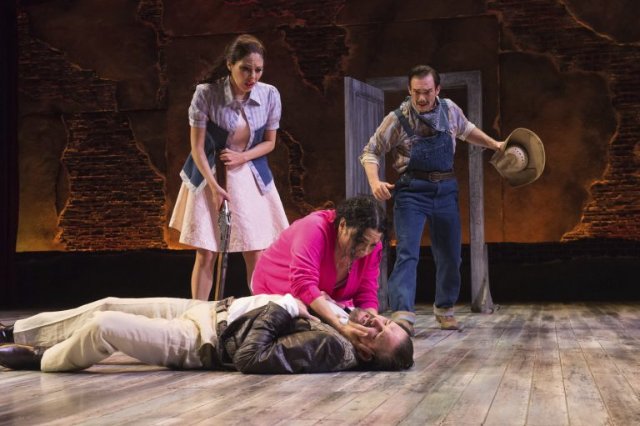 It will probably surprise most Americans who are not Latino to learn that with over two billion viewers, the most popular form of television entertainment worldwide is the telenovela. Similar to our soap operas, these Latin American created melodramas differ by having greater intensity of action and self-contained plot with a final climax rather than a never-ending narrative.

Playwright Karen Zacharias has penned a hilarious send-up of the genre with Destiny of Desire, a farcical comedy with music – a sociological voyage with the trappings of a Mexican Bollywood production. Its genesis is the trite but true “swapped at birth” storyline. The newly-born daughter of Fabiola, wife of the rich casino owner Armando, is sickly and expected to die. The peasant Hortensia’s new born is healthy. Fabiola induces Sister Sonia, the nun/nurse, to agree to the exchange. Fabiola promises that she will give Hortensia a job as her maid, and insists that while the sick child is expected to die, Hortensia will be able to have other children.

Both girls survive childhood but don’t meet for 18 years. At this point, secret blood links among these two families and various other characters reveal more intersections than a pair of centipedes in heat. And just when you think there can’t be anymore hidden connections, another pops up, and another, and another. Played in a campy style, the laughs cascade like a thundering waterfall, and the audience howls of recognition and appreciation make you think you’re in Guadalajara rather than Ashland, Oregon.

The exuberant and talented José Luis Valenzuela has directed this play with some of the same cast members at several top regional theaters, and his experience shows. Actors move briskly and mug at all the right times. Absent a permanent set, billowing curtains and movables are swirled about by cast and crew to provide sufficient staging and allow better focus on the stunning wardrobes.

Over the top acting abounds, and the whole cast rises to the task. Some favorites include Vilma Silva as Fabiana, the fading and wicked perpetrator. Esperanza America, whose every scream evokes laughter and who sings with power and beauty, plays Pilar, the poor-born, rich-raised daughter. Well known to Bay Area audiences, Catherine Castellanos portrays Sister Sonia, the kind but crafty nun who has a past of her own. Finally, Armando Durán is Armando, the egomaniacal peacock and the richest man in Bellarica.

On the surface, Destiny of Desire can certainly be enjoyed as a frivolous cream puff and that alone. But the playwright is going for something more. Knowing that the greater part of her audiences are likely to share her liberal politics, she unabashedly uses scene changes as sidebars in which one of the characters speaks into a microphone at the edge of the stage. The characters deliver facts and statistics on topics such as discrimination, sexual abuse, and gun ownership that tie into the action in the play. One sidebar even notes that behind only Mexico, the United States now has the second largest population of Spanish speakers in the world!

Zacarias’s seriousness of purpose is indicated by her adoption of Brechtian techniques suggested by the sidebars and by the values implied in the action of the play. These devices intend to distance the audience from the characters so that they can instead focus on the social action implied by the text. The playwright does this by sometimes having actors who are not in a scene remain as observers; having the actors comment on the action; and by announcing in a general sense what action is to come before each scene. The setup to all of this, however, is that the opening of the play supposedly discloses that this cast of actors has found a dilapidated theater in Ashland, wherein they perform the play set in Mexico. This notion is clear to anyone who reads the program but is not well communicated or so understandable otherwise.

Destiny of Desire is written by Karen Zacarias, produced by Oregon Shakespeare Festival, and plays at its Angus Bowmer Theatre, 15 S. Pioneer St., Ashland, OR, in repertory through July 12, 2018.