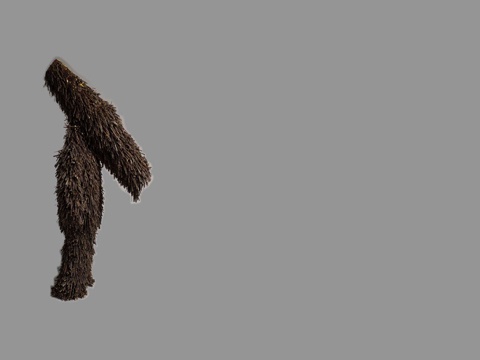 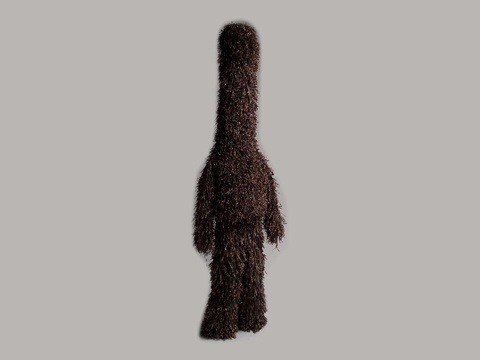 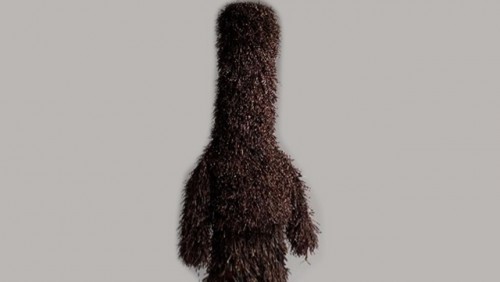 Detail of the head and shoulders. 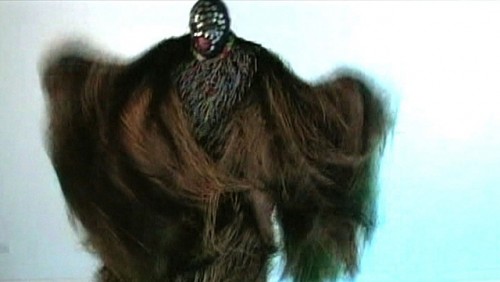 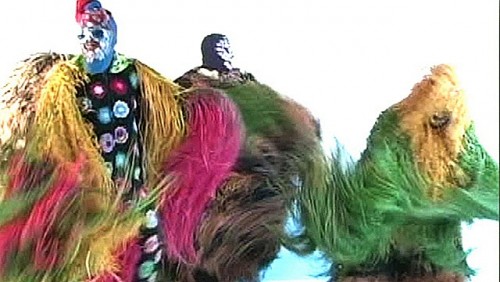 A group of dancing figures. 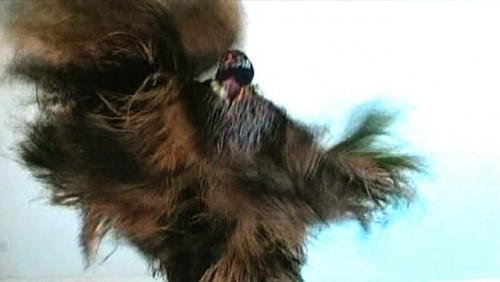 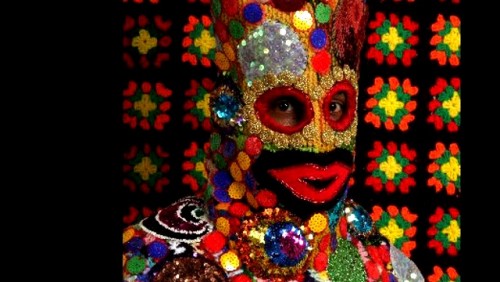 A detail of the ritual face. 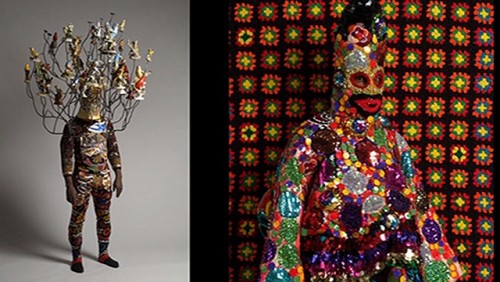 A diptych of images. 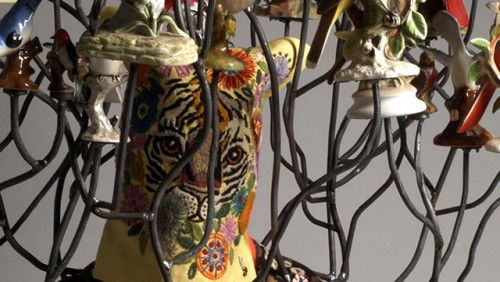 A tiger appears to be lurking in a forrest. 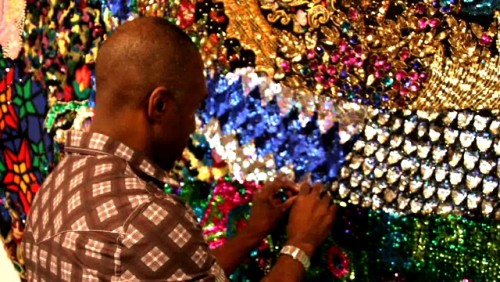 The artist working on a piece. 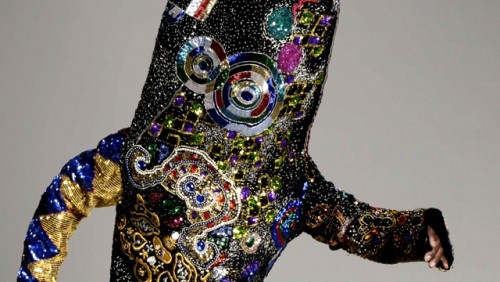 Details of the elaborate beading. 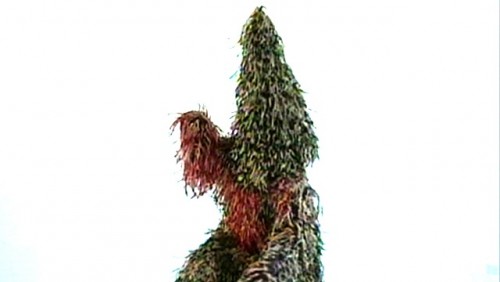 Nick Cave ( Chicago ) began his career as a performer and fashion designer, creating fantastic, almost ritualistic costumes for dance and performances. More recently, he has been presenting these costumes as sculptural objects. These works, which he calls Soundsuits, are textured, sensual, elaborately designed assemblages of sometimes unexpected materials that act almost like musical instruments, emitting sound as they move. He has produced 40 of these pieces, which he describes as "full body suits constructed of materials that rattle with movement . . . like a coat of armor, [they] embellish the body while protecting the wearer from outside culture." Cave has received the Joyce Award (2006), the Richard Dreihaus Foundation Individual Artist Award (2006), Louis Comfort Tiffany Foundation Award (2001), and several grants from Creative Capital. He is a professor at the School of the Art Institute of Chicago.

About Nick Cave
By Susan Morgan

"So many people don't dream anymore," observes artist Nick Cave , his plainspoken words quiet as a sigh, frank yet wistful. "But I," he marvels, brightening with unmistakable joy, "have an opportunity to bring dreaming into our lives." Following his graduation from the conceptually innovative, fiber arts program, at Cranbrook Academy of Art (MFA '89), Cave has been assistant professor and chair in the Department of Fashion Design at the School of the Art Institute of Chicago. His work has ranged from enticing haute coutureÂ—deftly draped layers of silk hand-painted in intricately subtle huesÂ—to sculptural assemblages, scavenged objects transfigured by an urbane conjure man's gift for magic. A former Alvin Ailey dancer, Cave is wonderfully alert to the sensual dynamic of the human body; as a bold visual improviser, he keenly perceives the nature and wisdom of his found materials.

Ten years ago Cave created the first in his ongoing series of Soundsuits: an exuberant towering figure constructed from gathered twigs, it was a fantastic garment that was otherworldly, 100 inches tall, larger than life, and entirely capable of standing on its own. When he donned this overwhelming costume, he felt exhilarated, altered, unjudged, a shape-shifter with only his eyes visible to the outside world. Moving within the suit produced an unanticipated sound like the rustle of wintry branches. "It led me to believe in extreme possibility," he recalls. "If this is what one Soundsuit could do, what would happen if there were 50?"

The Soundsuit was a sensational hybrid, a startling presence that could rouse the senses and bring together the strands of Cave's artistic practiceÂ— fashion, sculpture, textiles, performanceÂ—while entering into a wider world and the long history of African masquerade, transformative rituals, and ceremonial costumes.

Born in 1959 in Fulton , Missouri , Cave was one of eight brothers raised by a single parent. The artist drolly claims that growing up with hand-me-downs only fueled his talent for reinventing. Now each of his monumental Soundsuits is painstakingly constructed from castoffs re-collected from flea markets and rubbish binsÂ—rattling bottle caps, glinting Easter grass, shaggy pelts of fake fur, and whooshing strands of raffia: here what was once abandoned is revered, the overlooked is presented gloriously to shine, spotlighted center stage. These wearable sculptures adorned with patterned surfaces and talismanic bundles evoke the resonant imagery of the African diaspora: sequins shimmer like voodoo banners; a plastic animal mask balancing atop a voluminous hirsute robe recalls a Cameroonian divination costume; and tree spirits seem to hover between this world and the next. Cave creates aggressively seductive surfaces, glittering with glass beads (described by his fellow artist Joyce Scott as "light made physical") or encrusted with plastic flowers and discarded toys.

In 2006, when the Chicago Cultural Center Â—a grand beaux-arts building modeled on the Doge's Palace in Venice Â—mounted an exhibition of Cave's work, 50 Soundsuits were displayed in an enormous marble hall. "It was the first time," says Cave, "I ever felt that I had actually walked into my dream."

In an effort to share artists' work around the globe, United States Artists (USA) and film company City Projects introduce Encounter: USA Fellows featuring video shorts profiling artists and their work. Unique in tone and content, each video provides a glimpse of the creative process.

United States Artists (USA) is a new non-profit organization celebrating the fearless impulse that compels every great artist to create and inspire us to think. In collaboration with filmmaker Phillip Rodriguez , USA Broad Fellow, USA will release a total of 14 video shorts as part of Encounter: USA Fellows. The first in the series of videos are now live on YouTube and the USA website. Additional videos will be released this Spring.