A Brilliantly Scripted Play About Our Past and Present 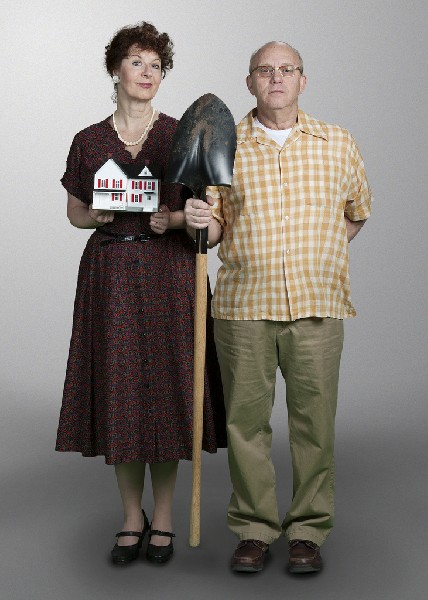 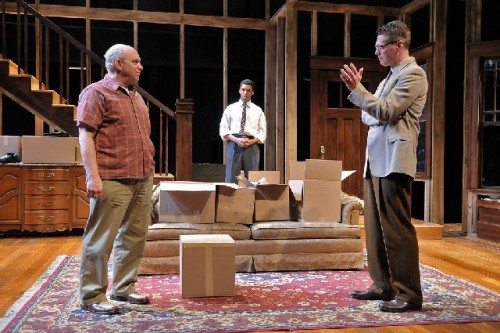 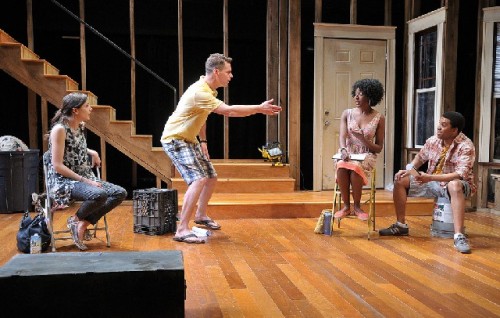 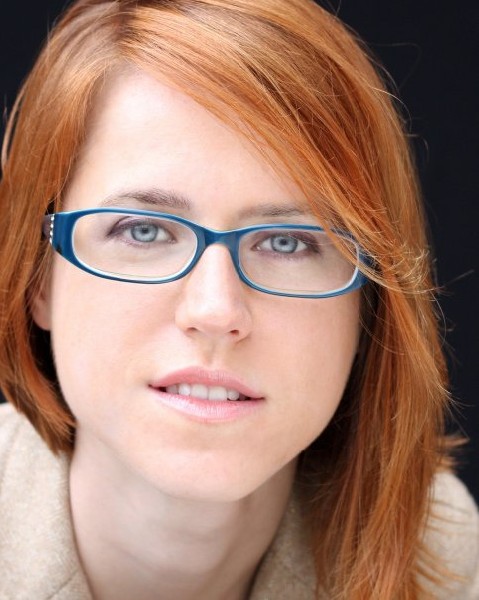 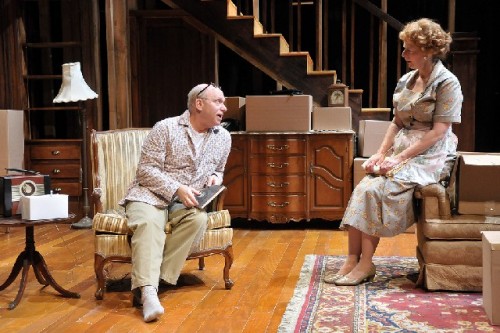 Thomas Derrah and Paula Plum in a scene from SpeakEasy Stage's production of Clybourne Park, All Production Photos by Craig Bailey/Perspective Photo. 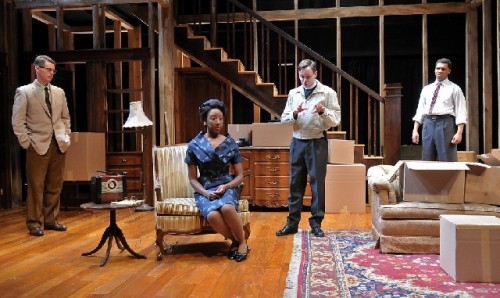 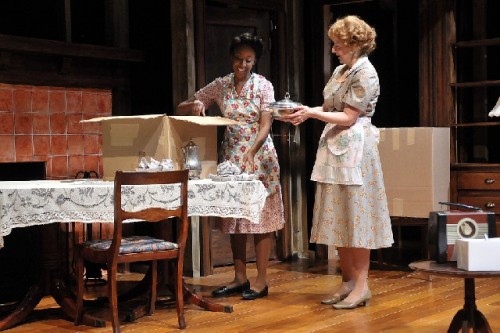 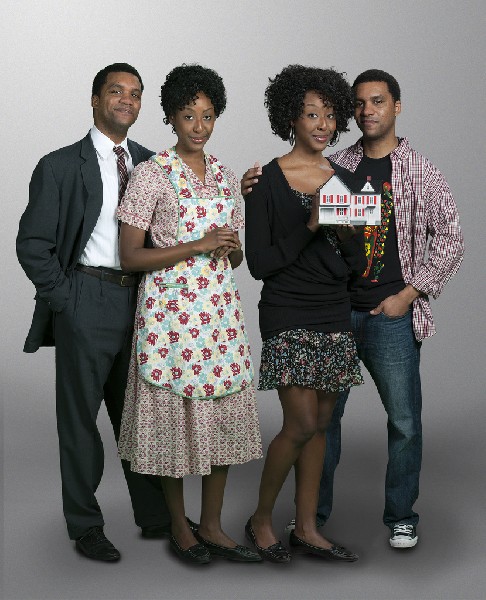 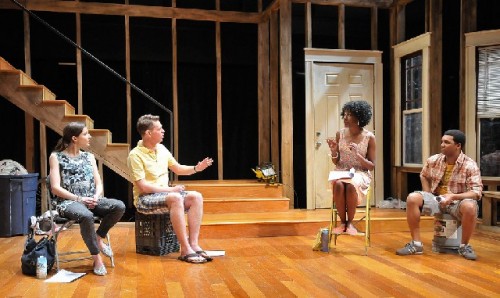 A house is not just a home. Besides its social and emotional aspects, it has an economic function that connects to its neighborhood's quality of life and financial value. It can be a part of communal ethos, neighborhood kinship or even an ethnic enclave. Housing and the neighborhoods that they are set in are pride of place premises. This is not only true of familial ties but ethnic and racial connections as well.

With Barack Obama’s two elections, many thought that this is a sign that racism is no longer a significant factor in American culture. Unfortunately, it still exists, both overtly or in more hidden, often ugly, attitudinal ways.

In many ways, the denial of racism in our culture can be seen as a new form of racism. To most, dealing with the subject is awkward and uncomfortable. It touches our inner conscience and inherited historic bad behavior.

But dealing with issues of racism frankly and pointedly can be thought-provoking and even cathartic. And that is the brilliance of Clybourne Park now playing at the SpeakEasy Stage Company.

The play is inspired by Lorraine Hansberry's A Raisin in the Sun. A satire/drama that takes a jab at race and real estate in a fictional Chicago neighborhood. The story begins in 1959 as a black family is about to move into a white community. Act Two is set at the same house in 2009 as gentrification sets in. Roles are now reversed. The ensemble of actors play two sets of characters.

Set in a spacious living room/dining room with packing boxes piled on each other, Bruce Norris' highly acclaimed (a Pulitzer Prize and a Tony) Clybourne Park opens with the master of the house, Russ, in his pajamas eating ice cream as his wife Bev and their black maid fuss over packing.

Starting with the name Neopolitan ice cream that he is eating while reading a National Geographic, he questions his wife about the derivation of various names and world capitals. She tends to get them all wrong. He enjoys correcting her. It makes Russ smile and amuses Bev. There is humor even love here. But something isn't quite right.

They receive an extremely awkward visit from their local clergyman. Shortly, a talkative neighbor and his deaf, pregnant wife arrive. In an even more clumsy way, the neighbor, Karl Lindner, informs them that the family buying their house is black (then referred to as colored). He begs them to back out of the deal. Karl is afraid that area property values will fall.

The black family moving in are the Youngers, the protagonists of A Raisin in the Sun. And the neighbor, Karl is a minor character in the play who attempts to bribe the Youngers into abandoning their plans.

Eventually, Russ loses his temper and throws everyone out of the house. He rants that he no longer cares about his neighbors after their callous behavior toward his son Kenneth when he returned home from the Korean War. Unspoken is Russ and Bev's deep grief for Kenneth who committed suicide on the upper floor of their home a few years earlier.

Act 2 is set in the same home as Act I but in 2009. However, the house is quite barren, stripped of its walls with only temporary folding chairs. Adroitly, the same actors reappear playing different characters. In the intervening fifty years, the Clybourne Park neighborhood has become an all-black enclave that is now in the process of gentrifying. A white couple seeking to buy and replace the house have to review in detail local housing regulations with a black couple representing a neighborhood organization. An argument ensues.

Clybourne Park's playwright Bruce Norris examines racism in America through the lens of property ownership. He is a provocateur. Relishing to expose the hypocrises in Bourgeois America, he is adept at making his audiences chuckle and squirm. In this and other plays, Norris continually pops the safety of the middle class suburban bubble.

The playwright sees racism as a millstone hanging around white Americans' necks. His theatrical targets are white, well-off, educated, middle class people. His work creates a conversation with them. But it is even better if black people are in the audience because it makes white people even more uncomfortable. Liberals be damned seems to be his mantra. In Clybourne Park, he brilliantly uses laughter and cringing to make his points.

The quality of the acting in this production is wonderful. There are no weak performances. Each actor expresses a dynamic individual. Certainly, their likability varies greatly (few are actually admirable), but their unique attributes reverberate and move along the sensitively written narrative.

Of particular note is Thomas Derrah as Russ. From morose to jovial, steadfast to belicose, his is a delicately layered, inspired characterization. Derrah is the tortured grieving father and the midcentury office man, a product of his times and circumstances. The audience empathizes and sympathizes with his superb depiction of fatherly heartbreak.

Paula Plum is excellent as Bev. Her Edith Bunker energy suggests uncontrolled potential chaos, yet maternal longing as well as wifely support. Obnoxiously, Michael Kaye plays Karl as the guy you love to hate. Playing a sanctimonious loudmouth well is no easy acting trick, but Kaye pulls it off with great aplomb. His character's rational objections don't resonate but we hear them anyway.

M. Beven O'Gara's direction is a beautiful choregraphy and harmony of space and players. Characters move in and out, up and down while telling the playwright's story. Cristina Todesco's scenic design physically embraces the actors, the action and the narrative. Here the notion of house, home, edifice and interior structures work symbolically and literally. The set is an articulation of interior architecture that speaks to the structure and volume of the play.

Clybourne Park is one of the best recently written plays. With skilled direction and at times inspired acting, this SpeakEasy Stage Company presentation is a sensational production. It should be seen by anyone interested in the best of contemporary theatre. In many ways, it is a wonderful guilty pleasure.