BSO Goes to Spain with Ravel and deFalla 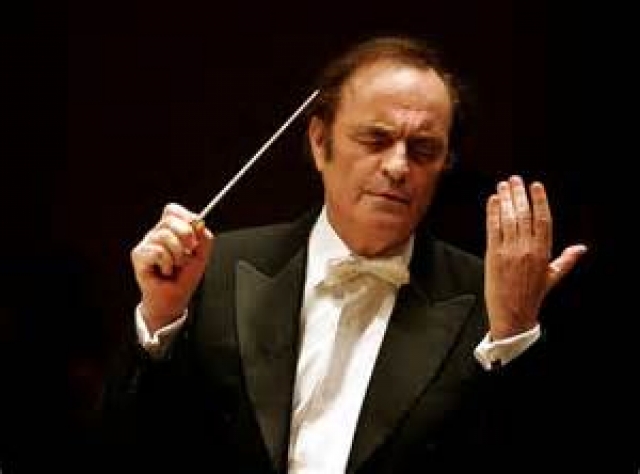 On a cold and wintry night, one of relatively few this season, the Boston Symphony Orchestra, under the baton of guest-conductor Charles Dutoit, took us on a tour to sunny Spain. All the clichés prevailed. There were even castanets. But any charges of cultural imperialism were misguided. One of the composers represented, Manuel de Falla, was born in Spain, and the other, Maurice Ravel, was born in French Basque country, just a few miles from the Spanish border, to a Basque mother.

In any case, the evening featured music that was light, languorous and heavily perfumed. Native artists are not immune to cultural stereotyping. This is not music the BSO has traditionally favored. The previous music director, James Levine neither played or programmed any of it during his short, tormented tenure. Indeed, this is the first time the BSO has presented Ravel’s “L’Heure espagnole,” a light and appealing “musical comedy,” in concert here in Boston, although it did perform it along with Ravel’s other one-act opera, “L’Enfant et les Sortilèges” at Tanglewood in 2001.

But what the program might have lacked in weight and substance, it compensated for with style and charm.

The tone of the evening was set with the first notes of Ravel’s “Rapsodie espagnole,” played by flutes, oboes and bassoons, followed soon enough by waves of strings, and finally the full orchestra. A pair of clarinets created shimmering sounds and a celesta picked out notes one by one. The first of four movements, “Prelude à la nuit,” is insinuating, seductive and suggestive of the languors and the pleasures of the night. The next two movements, “Malagueña,” and “Habanera,” feature readily identifiable dance rhythms associated with Spain (even if the Habanera originated in Cuba), although with Ravel’s complex orchestrations and rhythmic distortions, you wouldn’t exactly want to get up and dance.

The final movement, “Feria,” takes us on a stroll through the city on a holiday when no work is done. It is perky, suggesting the explorations of an urban walker with no particular destination or purpose other than to amuse him or herself. I couldn’t help but think of George Gershwin’s “An American in Paris,” which proposes a similar ramble. About a third of the way into it, it slows down and an oboe plays a Moorish melody – it is siesta time. Even on a holiday you have to sleep at midday. “Only mad dogs and Englishmen go out in the noonday sun,” as Noel Coward put it. But then everyone wakes up and there is bustle and activity to close the piece, which ends with a big swoop of sound. The orchestra played as if it were second nature to them – they last played the piece in 1995 – and Dutoit, who conducts the BSO regularly, led the forces with ease and grace. He shows respect for the musicians, keeps a firm hand but doesn’t force an interpretation.

Falla’s “Nights in the Gardens of Spain” was the only work on the program composed by a Spanish born composer, but it is as French aesthetically as either of the Ravel works that bracket it. Falla, who was an almost exact contemporary of Ravels’s (1876 to 1946 for Falla; 1875 to 1937 for Ravel), went to Paris where all ambitious artists of any genre tended to go before World War I, and actually met and befriended Ravel and Claude Debussy, who encouraged him, Debussy arranging to get his first opera produced.

“Nights in the Gardens of Spain” is a hybrid, a tone poem with a piano soloist. So is it really a piano concerto too reticent to speak its name or is the piano just used for its color? With Spanish soloist Javier Perianes, you might think the former. Although he wasn’t overbearing, he dominated every moment he played with an almost liquid transparency of sound.

“In the Generalife,” a famous garden in Granada that dates to the 14th century when the city was a center of Islamic culture, suggests the overpowering perfumes of flowering plants hit by the sun on a hot summer day. Harps are prominent at the start and the piano enters with strings and woodwinds. An oboe solo is echoed by bassoons. In the other two movements, “Distant dance,” and “In the gardens of the Sierra de Córdoba,” Falla exploits his skill at tone-painting. In the final movement, Perianes picked out each note with deliberation.

As a reward for his exquisite playing Dutoit persuaded Perianes to play an encore. He played a short, romantic piece with the same grace and limpidity he had brought to the Falla. No one in the audience seemed to know what it was. Another piece by Falla or maybe one of his Spanish contemporaries? No, it was a visitor from the North seeking the sun – Edvard Grieg. A brilliant conceit on the part of the pianist.

Of course, as a self-proclaimed opera critic, the reason I had come to the concert was to hear Ravel’s first opera – he wrote only two – “L’Heure Espagnole,” which he categorized as a “musical comedy.” Please don’t think Broadway. The large orchestra employed would be impossible in any of those commercially oriented houses, and the singers were not miked but used their natural voices, which they’ve been trained to fill a 2,000 seat theater like that of Symphony Hall. And Ravel didn’t need to turn to a Jonathan Tunick as Stephen Sondheim does to write his orchestrations. He wrote them himself. What Ravel intended by using the term was to alert his audience not to expect Wagner or Verdi. He was composing a little divertissement on the model of Mozart and Rossini, an opera buffa, nothing too heavy, and certainly nothing too serious.

The result was an absolute delight. I always attend concert versions of operas with reluctance. Operas were written to be staged, not presented in a concert hall by singers in gowns and tuxedos lined up along the lip of the stage. But in recent years, music organizations of all types are realizing that the old model in which the music – and orchestra – dominates and the drama is minimized not only does not do justice to the work’s intentions, but it’s also not all that appealing to the contemporary audience. And the latest crop of singers, who are asked to do all sorts of stunts on stage, are game. A shock for me on my return to Boston was to attend James Levine’s last performance with the BSO of a pair of operas, Bartok’s “Bluebeard’s Castle” and Stravinsky’s “Oedipus Rex,” in which the singers just stood in place like oratorio singers. Was this the music director of the Metropolitan Opera??

Fortunately, the BSO has moved on from Levine’s sorry example. It even semi-staged with great success Mendelssohn’s “Overture and Incidental Music to ‘A Midsummer Night’s Dream’ ” during its recent Shakespeare festival, a work that wasn’t even intended to be an opera!

It didn’t attempt to stage or semi-stage Ravel’s “Spanish Hour” – the plot is a classic French farce with shenanigans going on upstairs and off stage between the central female character and her three lovers, and grandfather clocks are carried up and down stairs with regularity. But the singers who took the parts fully enacted their roles vocally and dramatically as they stood more or less in palce, so that you didn’t feel as if you were missing too much. And the excellent supertitles with stage directions printed in red contributed to ease of appreciating the evening as a drama as well as a concert. The laughs in the audience came easy and often.

The plot is easily dispensed with. Torquemada, a clockmaker, sung by high tenor François Piolino, has to go out on his weekly job of keeping the city’s clocks on time. During his weekly absence – about an hour in duration - his wife Concepcion, sung here by Argentine mezzo-soprano Daniela Mack, entertains her lover Gonzalve, a poet, sung by tenor Benjamin Hulett.

Unfortunately, a muleteer – in today’s terms, a truck driver - who has come into the shop to have his watch repaired, sung by baritone Jean-Luc Ballestra, has been asked to wait until the clockmaker returns, so he is in the way of Concepcion’s weekly “Spanish hour.” A nice conceit of the opera, BTW, is that it lasts just about an hour. To get Ramiro, the muleteer, out of the way, Concepcion asks him to carry a heavy grandfather’s clock upstairs, which he does with no problem and soon returns.

The wily clockmaker’s wife comes up with a solution to her predicament. She hides her lover in one another clock and asks the muleteer to carry that one up to her bedroom. In the meantime, another admirer, Don Inigo Gomez, a banker, sung here by bass-baritone David Wilson-Johnson, shows up. He tries to hide in the first clock, which has been brought back downstairs to the shop, but he is too fat and gets stuck. Anyway you get the idea of the general choreography – clocks being carried upstairs and down to general hilarity.

But there is characterization as well. Torquemada is a wimp, Concepcion a young hot-to-trot wife, looking for action she doesn’t get from her husband. Gonzalve is a narcissist, more in love with his constant versifying than he is with Concepcion, Don Inigo is an over-the-hill rich man, inept at love. And Ramiro is the classic working class stud.

As the constant maneuvering goes on, Concepcion’s affections switch from Gonzalve and Don Inigo, where there was never any heat to begin with, to the muleteer. Between the choice of a lover who is too full of himself and another who is too old – or as she puts it, “one unwilling, one unable” - she chooses the virile man, singing, “his biceps surpass my concepts.” (In the program note, another translation is quoted, “He has a torso like Apollo, only more so,” which I like better.)

The cast was extraordinarily well-balanced. No one stood out and no one faded into the woodwork, or here, the orchestra, which played the dominant part musically. (No real opera buffa would have such a large orchestra playing such a detailed score.) And they were all excellent vocally and dramatically. There were no arias in the classic sense, but as the little opera reaches its end, each of the principals has a moment to express their feelings. Mack’s “Oh! La pitoyable aventure!” (Oh, what a pathetic adventure) a brief arietta in which she expresses her frustrations, is the best known. Mack, who sang with warm tones, communicated the frustration of a passionate woman who can’t get any action.

Hulett was brilliant in his comic characterization of an empty poetaster, singing sweetly but turning any and every event into an opportunity to versify. Piolino, with his comically lank hair and piping voice, was the perfect image of a milquetoast. Wilson-Johnson had the least to do, but he sang with requisite bluster. And as the muleteer, Ballestra exemplified sweetness and masculine grace. It was no wonder that in the end he and Concepcion pair off. In the final quintet, the cast quotes Boccaccio (?) to the effect that “the muleteer eventually gets his turn.”