Cast of Broadway Palm Dinner Theatre's production of "Anything Goes." 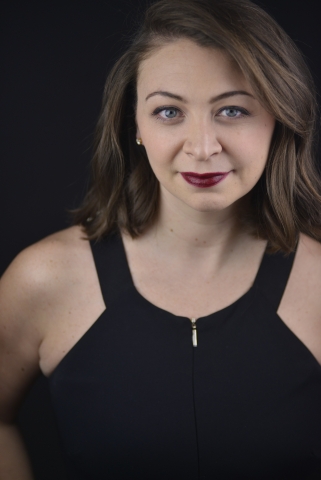 As many recent South Florida productions have proven, live theater can powerfully mirror the ails of today. But there’s a limit as to how much dark, disturbing fare, however timely, we can take before we become overwhelmed. At certain points, we require pure escapism.

Broadway Palm Dinner Theatre has just that in its splendid production of Cole Porter’s light and breezy “Anything Goes.” The 1930s musical comedy is as refreshing and invigorating as a warm ocean breeze on the upper deck of a cruise ship.

Such a vessel serves as the setting of this delicious treat of a musical, featuring varied, pleasing musical styles and wit, in typical Porteresque fashion.

You’ll feel as though you’re in the dining area of a ship similar to the S.S. American. Succulent servings of chicken, beef, fish, salads and desserts are available, with a friendly wait staff ready to accommodate you.

Then it’s on to the show, beginning with a bit-too-brief but spirited overture. The curtain rises on what strongly resembles a sturdy-looking ship’s interior, appropriately lit according to mood.

Multiple versions of this musical are available for production. Broadway Palm Dinner Theatre has opted to stage the 1987 Beaumont version, featuring twice as much dance music as the 1962 production.

Both versions contain the same comical, complicated plot and well-known Porter songs such as “I Get A Kick Out Of You,” “It’s De-Lovely,” “Friendship,” “You’re The Top,” “Blow, Gabriel, Blow” and the title song.

Of course, none of this matters without a vivacious cast comprised of triple threats -- each of whom can slip as easily into song, dance and dialogue as we can into the shower. Fortunately, this cast is made up of such individuals.

Any production of “Anything Goes” needs a magnetic, sexy performer with ample stage presence, charisma and showmanship to play evangelist/nightclub singer Reno Sweeney. This production has a performer with such qualities in Christina Tompkins.

The actress, donning a glistening outfit perfectly matching her personality, owns the stage as Sweeney, whether the character is singing the bright duet “You’re The Top” with young Wall Street banker assistant Billy Crocker (a boyishly charming, versatile Conor Robert Fallon), the upbeat “Blow, Gabriel Blow” or the showstopper “Anything Goes” (the title song).

The performers are accompanied by a small but spirited live orchestra, which never drowns out the singers.

Crocker is after his long-lost love, debutante Hope Hacrourt (a young, pleasant in manners Allison Fund) aboard the England-bound ship from New York. Problem is, Harcourt is engaged to wealthy Englishman Lord Evelyn Oakleigh (an eccentric, flamboyant Craig Smith). Sweeney, a couple of famous gangsters and others comically fit into the plot, which features farcical material, wit and a satire of celebrity gangster worship (think a much lighter version of “Chicago”).

There are nearly as many mistaken identities and disguises as in a Shakespearean comedy. Mentioning Porter and Shakespeare in the same sentence is hardly a stretch. Porter, after all, was the composer/lyricist of “Kiss Me Kate” (1948), a musical treatment of the Bard’s “The Taming of the Shrew.” In that gem, Porter showed an ability to marry his lyric style with Shakespeare’s speech.

In Porter’s obituary (he died in his early 70s in 1964), the Associated Press recalled the composer/lyricist’s signature style, known as a “Cole Porter Song.” His lyrics are “urbane or witty” and are paired with melodies “sinuous (and) brooding.”

Porter’s melodies could also be “simple (and) bouncy” with lyrics listing “similarities, opposites (and) contrasts.” Porter’s clever rhyming is also on display in, for example, “You’re The Top.”

Director Paul Bernier’s smart staging includes placing the character the song is describing on thetop – the second level of the ship’s interior. Bernier, who directs with an infectious comic energy, uses such heights to appropriately highlight characters.

Richard Rodgers said of Porter: “Few people realize how architecturally excellent his music is.” Such enticing music, combined with an escapist story, turn “Anything Goes” into the perfect retreat for those weary of our world’s constant worries.