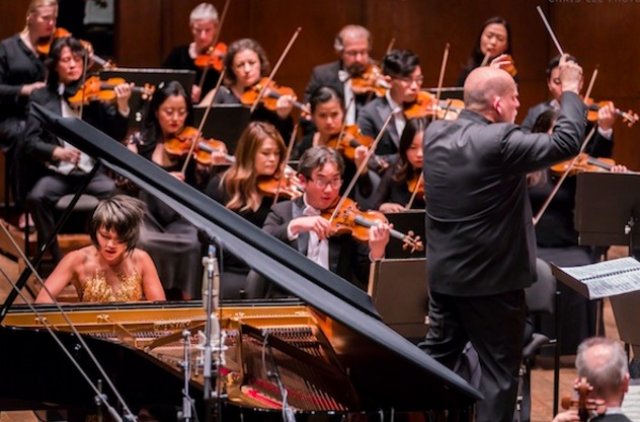 The New York Philharmonic just went on tour. However, before the orchestra caught a Saturday flight to Japan last week, they played four evening concerts under its new music director Jaap van Zweden. The program, heard Friday night, eschewed the usual tripartite musical evening for a pairing of heavyweight favorites: the D minor Piano Concerto by Johannes Brahms, and the Fifth Symphony of Serge Prokofiev.

Van Zweden took a measured approach to the first orchestral statement that opens the Brahms concerto. He hewed closely to the marked tempo of maestoso where other conductors speed up, producing clipped, stately phrases in the orchestra. This passage and a section of the third movement where the strings lead a fugue show that Brahms was looking into the past, past the overwhelming influence of Beethoven to the then-neglected 18th century. Van Zweden showed that he understands the individualistic and quirky originality of this sometimes maligned composer.

Brahms himself was the soloist at this work’s premiere but here the demanding piano part was the responsibility of Yuja Wang. She announced her presence with authority and poise, joining the steady traffic-flow of the orchestra and bursting out into flights of fleet commentary. She seemed to struggle with the steady pace at first but the two artists agreed and better coordinated their efforts resulting in a recapitulating statement of power and purpose.

There is no argument that Wang is a skilled piano technician. Indeed if criticism must be levied it may be that her sound in the slow movement was a little too polished and perfect. Still it was a dreamy string of notes, hinting at its creator’s de facto influence on the century that followed him. The Rondo was pure fire and ice, a dazzling stream of fireworks with a brief baroque interruption from the aforementioned interpolated fugue.

The soloist then wowed her fans with two encores. The first was a lucid dream, diaphanous passages that hinted and whispered without ever stating their full purpose. The second was pure, pounding steel, played with a claw-like attack that took considerable strength and dexterity. In keeping with the evening’s program, the first was by Brahms, the second, Prokofiev.

Where Brahms might hide coded messages of real pain in his  musical fabric, Prokofiev preferred to dazzle the listener with a cloak of sophisticated orchestration. One reason for that might be that the composer was back in the U.S.S.R. when he wrote the Fifth. In the summer of 1944, Russia had been both  invaded and besieged by the Nazis, its cities destroyed and its population slaughtered. The Red Army was finally turning the tide of the war against Hitler. It is a chummy bit of Socialist Realism, music designed to inspire the proletariat while escaping the notice of the Soviet censors.

The problem with Prokofiev (for this writer anyway) is that his sheer virtuosity is also his method of concealment. This means that many performances come off as all flash and little substance. Happily, the New York Philharmonic are adept in this particular symphony. (In fact it is the only one among the composer’s seven that the orchestra regularly programs at David Geffen Hall.) Their precise percussion and heavyweight brass made a juggernaut of the first movement, rolling over the listener with bustling energy and a cheerful lack of inhibition.

Prokofiev’s wry, playful scherzo brought the woodwinds, percussion and piano into the spotlight. The players surged into a trio of temporary insanity before resuming the determined, frenzied rhythm. The slow movement offered stark profundity, a moaning string figure that labors at a lugubrious tread. In the finale, a slow introduction set a serious tone van Zweden unleashed the full fury of the four sections. He whipped up a storm of sound. This was the sound of optimism but that of a kind of over-compensation through repetitive assault on the same thematic material. Perhaps Prokofiev wrote in code after all. (Reprinted by permission from Superconductor).