In a Little World of Our Own by Gary Mitchell 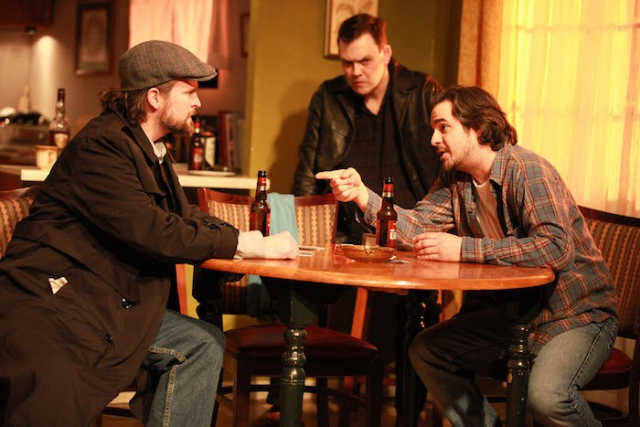 In a Little World of Our Own is a benign name for a tightly wound thriller that spins out of control in 80 minutes. The Irish Theatre’s new production of the Gary Mitchell script, directed by Jeri Frederickson, is set in a middle-class Protestant home in Belfast, Northern Ireland.

Frederickson directs this fierce drama, moving the five cast members through a day and night in the life of three brothers, who live in the family home with their dying mother. Ray (Matthew Isler) is a UDA hard man, always ready for a fight. He watches over his mentally impaired younger brother Richard (Gage Wallace), including teaching him to play poker. The third brother, Gordon (Jeff Duhigg) is about to get married and move out to live with his fiancée Deborah (Jodi Kingsley). She’s a religious woman whose answer to everything is to pray. (That’s not a solution that works in this environment.) Gordon and Ray argue about where Richard should live; Gordon and Deborah want to take Richard with them to their new home where they can protect him. Richard makes it clear he wants to stay at home with Ray.

Richard wants to go to a party to see his friend Susan, the girl he fancies; but she’s going out with a taig (a Catholic), which infuriates the brothers. (Susan’s father is Monroe, a political activist and advocate of non-violence—and Ray’s enemy.) Ray takes Richard and arranges the time he will pick him up after the party. Something terrible happens at the party and they’re afraid Richard will be blamed. Ray wants to “sort it out” for Richard. Walter (Robert Kauzlaric), the go-between who talks with Monroe, advises the brothers that it will be better for Richard to go to the police. The ending is abrupt and violent, as we might suspect from the beginning. A story set during the uneasy peace in Belfast can’t be expected to have a happy ending.

Isler plays Ray with a Colin-Farrellesque look and intensity. He’s ready to do anything to support his family and the loyalist side. Both he and Walter are UDA members (the Ulster Defence Association). Wallace gives a moving and believable performance as Richard.

Merje Veski’s set design—the Belfast living room, dining and kitchen area—looks comfortable but messy, with beer cans and food wrappers strewn about. Kathy Logelin coached the actors in their Northern Ireland accents; for the most part, they are consistently done. The playbill includes a helpful summary of the Troubles in Northern Ireland through the 1998 Good Friday Agreement.

Playwright Mitchell is from a working-class, loyalist background and grew up in North Belfast. He’s considered Northern Ireland’s finest playwright. In talking about his home, he told an interviewer, “It’s a macho culture. People are judged on how good at fighting they are and how good at intimidating people they are, certainly not how good their brain is or how good they are at passing exams.” In a Little World of Our Own (the title suggests the claustrophobic action of the play) won The Irish Times Theatre Award for Best New Play in 1997.

In a Little World of Our Own continues at the Den Theatre, 1333 N. Milwaukee, through April 10 with performances Thursday-Sunday. Tickets are $26-30.