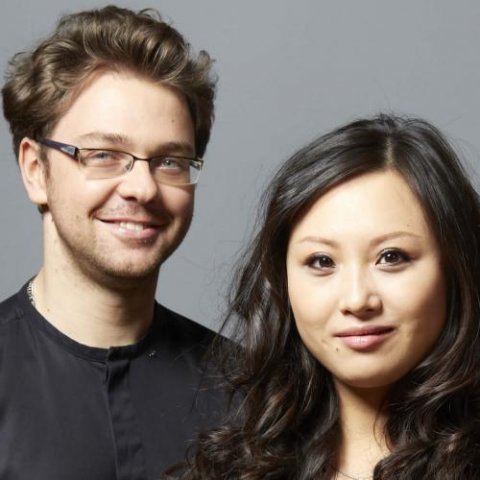 Alexander Sitkovetsky and Wu Qian at the Aspect Foundation.

The Aspect Foundation is committed to making the concert experience memorable.  By offering food and drink before the concert and during intermission, and selecting unusual and glistening venues, audience members are swept into their commitment to first-rate music-making.  Evenings Aspect presents are unforgettable.  Go to one and you will be hooked.

Nicholas Chong, a music historian, introduces the works to be performed both in discussion and visual accompaniments.  How often do we see Brahms without his beard?  Chong has absorbed the history behind each piece that will be performed, and talks to us about its origins in a human context.  We are quickly informed that Tchaikovsky did not like the music of Brahms.  Brahms reciprocated.  Chong teases with the promise of the story of a dinner the two men attended together in the home of Adolph Brodsky.  By the first intermission we had not heard the story and wondered where it might fit into the rest of the evening.

The program opened with a small Brahms Violin Sonata in A Major.  Alexander Sitkovetsky immediately displayed his superior musical genes. His great aunt is the pianist Bella Davidovich and his uncle, her son, violinist and conductor (Greensboro Orchestra), Dmitri Sitkovetsky.  The melodic lines of Tchaikovsky’s Souvenir d’un lieu cher have never been played with more perfect dynamic shape, soaring powerfully to high notes, and tender when the composer is caught in memories. Tchaikovsky wrote the sonata for Iosif Kotek, who worked with him on creating the piece. Kotek, we are told, might have provided more than inspiration. Tchaikovsky had just left his wife after a disastrous two month marriage. The two men were entertwined.

Qian accompanying on the piano was respectful of her husband’s violin lines and underscored the sense of both scores. She would shine in the second part of the program

Before the second half began, Chong inserted a third character into Brodsky’s dinner, Edvard Grieg. Mrs. Grieg had been seated between Brahms and Tchaikovsky and begged to be moved. Her position made her too nervous. She switched seats with her husband, who had a gift for making his companions comfortable. The evening continued without incident, although Tchaikovsky had never hidden his disdain for Brahms’ musical efforts.

The host actually saved the Grieg Sonata we would hear.  He stayed the composer’s hand as Grieg aimed to throw the score into the fire, and saw to it that the work was published and performed.

The piano and violin have different textures in this piece. Qian played lovely trilling, like water lapping in lake, poised in the upper register notes on the piano and in contrast with rips of the violin through arpeggios and scales.  Sitkovetsky paid particular attention to the contrasting demands of plucked strings.  Sometimes he offered plucks that were stunning.  At others, his fingers leaned into a harsh, staccato effect.

This husband and wife team demonstrates, to couples surveying each other and those more embedded, how to relate with loving respect and determined measures in demanding situations. Aspect offers a special opportunity to observe these lessons with pleasure.  The next Aspect Concert will be at the Bohemian National Hall on April 17.