Don’t Eat the Mangos is a Wonderful Play

At Magic Theatre in San Francisco 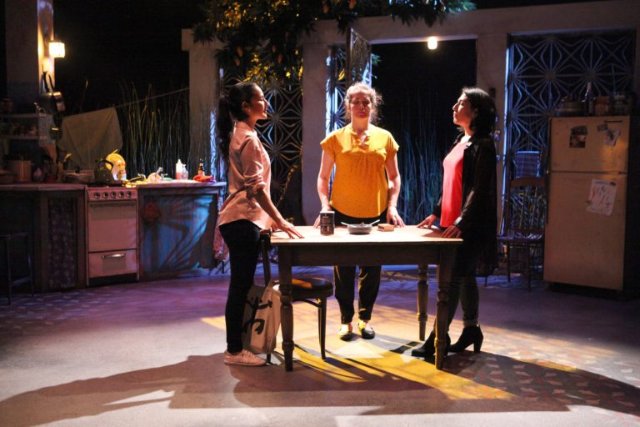 A customary misconception is that siblings share the common experience of growing up in the same family. However, the bigger the age gap, the more unalike the experience. Parents undergo life cycle evolution from changes in their economic condition to their personal relationships. Birth order of children alone makes for differences, the eldest being the only one to experience the uniqueness of being the parents’ first, and for some time, the only child. Later children may have their family lives mediated by older siblings who might act as protectors or antagonists. And in dysfunctional families, especially those with abuse, siblings may suffer the ravages unequally. In some, the secrets kept will have profound influence over the lives of the siblings. Playwright Ricardo Pérez González explores these themes in a riveting and evocative world-premiere dramedy produced with skill and affection by Magic Theatre.

In Don’t Eat the Mangos, three adult Puerto Rican sisters remain close despite fractious relationships and the different directions their lives have taken. The eldest, Isma, has never married and her insularity is accentuated by remaining in the parent’s home and acting as primary caregiver to both parents at the end of their days. Papi is paralyzed and suffers a condition that requires continual pumping of phlegm from his lungs to keep him from suffocating. Mami has suffered a relapse of cancer.

Middle sister Yiyi has prospered in a traditional family environment. The wife of a top construction manager who has an opportunity for an even bigger job in The States, such a move would have implications to her sisters. The youngest, single parent Wicha, teaches and embraces causes.

The action centers on clashes that siblings commonly confront in dealing with dying parents and their property. So it is that the sisters argue about how the dirty work of responsibilities are shared. A storm causes a power outage that requires human suction to withdraw the phlegm from the father’s lungs. This event intensifies the discussion of how to deal with a virtually dead man who so failed his family in human decency – hypocritically self-righteous; lavishing on those he wanted to impress while his family went hungry; and physically abusing the daughters. But beyond the already known, secrets emerge which will galvanize feelings and actions. The playwright reveals great insights into family – of the flashing candor of love/hate relationships that are almost unique within families, and how family members deal differently facing the same set of circumstances.

Every aspect of island life rings true in this production. Tanya Orellana’s scenic design incorporates features like the rusting on the gate and laundry hanging on the line outside. The tweeting of birds and the crackling of thunder in a tropical storm are beautifully captured by Sara Huddleston’s sound design. And Chris Lundahl’s thoughtful lighting includes frequent shading and the dramatic effect of candle lighting during the power outage. The playwright’s dialogue is both zesty and reflects the frequent language switching expected in a bilingual environment. And the strong cast delivers the goods. Yetta Gottesman stands out as Ismelda, stoic about her station in life but willing to fight for what she values. Wilma Bonet excels as Mami, who regrets her failings as a mother. Elena Estér as Yiyi, Marilet Martinez as Wicha, and Julian López-Morillas as Papi also deserve recognition.

Don’t Eat the Mangos is a wonderful play. It scintillates and provokes, dealing with critical issues in an entertaining manner.

However, the correction of several easily managed characteristics would increase its clarity and improve the overall experience. The script is written as if for insiders. The three sisters are foisted upon us without clear name distinction at the outset, creating early identity confusion. The worst is that the middle sister’s name in the program is Yinoelle, but she is called Yiyi, which is pronounced Gigi, which many people won’t sense is a diminutive of Yinouelle. Plus, before we have their names straight, the women variously make other references that seem as if they could be names, such as Bicha, Jibara, and Sanchu. While this may pass for natural conversation, it can confuse the non-Spanish speaker. Then Mami refers to herself as Boricua. What percentage of an American audience will know that it means Puerto Rican? A substantial portion of the script is in Spanish. The audience should either realize that the specific meaning of the Spanish tracts is unimportant and adds nothing to understanding the play, or its meaning should be abundantly clear to all of the audience.

A final issue concerns David Mendizábal’s otherwise exemplary direction. Perhaps dialogue is fully audible throughout for audience in the center section, but when actors face away from the side sections, they often cannot be heard.

Don’t Eat the Mangos is written by Ricardo Pérez González, is produced by Magic Theatre, and plays on its stage at Fort Mason, 2 Marina Drive, San Francisco, CA through March 22, 2020.