At the Palm Springs Woman’s Club 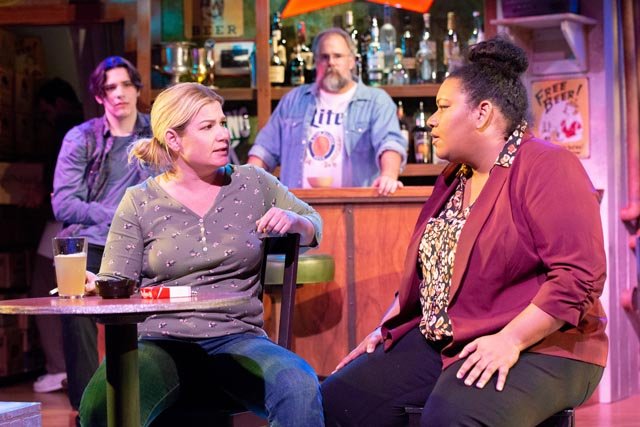 Photo by David A. Lee.

Prolific, award-winning American playwright Lynn Nottage, the only female to win two Pulitzer Prizes in drama, is also considered to be one of the most produced playwrights not only in America but across the world.

That being said, how come most audiences don’t quickly recognize her name but always remember what her plays are about?  Perhaps, it’s because Ms. Nottage usually champions the underdog.  She’s ‘David’ in the David and Goliath battles. She exposes the inequities of life and tries to broker the best in all societies with her penetrating and passionate plays.

Those plays revolve around societal issues be it here in the USA with “SWEAT” (her second Pulitzer Prize in 2017) or her set in Africa drama “Ruined”  her first Pulitzer in 2013) that poignantly dealt with the wars and the rape of African women by waring soldiers over the last 20 years.

The subject matter of her plays can be dark, gritty at times, usually centering around the less fortunate among us where the vernacular of the street and its language rules the day. (A note of caution here: there is a plethora of adult language throughout the play with f-bombs being hurled from the stage so leave the kiddies and grandma at home).

Not everyone wants to think introspectively about how the sum of society’s parts today illustrates the total problems the world faces in the twenty-first century.  The prospects, for most of us, regarding solutions, are too daunting, with many in denial about the future of America’s workforce.

The story of “SWEAT” takes place in Reading, Pennsylvania, in the years 2000 through 2008, where America’s industrial manufacturing plants are facing ever-increasing layoffs as jobs are moving elsewhere, even overseas.  It’s not a rosy picture.  Many fear the days of the Great Depression of the 1930s and the new mood of Corporate America, where their “bottom-line mantra” of financial belt-tightening policies will return and effect everyone.

America’s Union movement is coming under increasing attack to accept less in negotiations with management. Most in America’s rust belt communities live from paycheck to paycheck. There are more worker bees than there are management types, with the union caught between these two powerful forces.

“SWEAT” is the compelling story of one such Pennsylvania factory where more friends work on the factory floor as hourly workers, must now come face to face with the inevitability of layoffs that test long-time friendships and even family relationships.

The Dezart Performs production produced by Michael Shaw and Clark Dugger, is brilliantly and seamlessly directed by Shaw.  His directorial vision of how to bring this potent story to the stage of the Palm Springs Woman’s Club is a story in its own right.  Ms. Nottage’s play features a cast of nine characters, each with a compelling story to share with the audience.  The Pearl Mc Manus theatre becomes the arena and a  metaphor for the struggles of all working-class Americas as they try to hang on to their piece of the “American Dream” in perilous times.

The central performing space, wonderfully designed by Thomas L. Valach, takes place in a neighborhood Bar frequented practically every day by the factory floor workers.  It’s so authentic looking in atmosphere, and in execution, there are real beer taps dispensing real beer – the audience applauded when the lights came up.  It’s the workers watering hole of choice where they gather over a beer or a shot of their favorite beverage to unwind, discuss their kids, politics, their fears, and dreams, as well as exchange gossip involving the company management demands of more work for less pay.

Even though the production is chock full of highly nuanced individual performances by gifted actors, the strength of this impressive production lies in the ensemble performance of the entire company.  Director Shaw becomes the symphony conductor, so to speak, who orchestrates his cast into becoming a finely-tuned performing theatrical instrument.  There isn’t a false note by the actors in this gut-wrenching, blisteringly raw, and powerful drama. Yes, there is a lot of shouting taking place on stage, but the life-altering issues stretch the characters’ emotions to the breaking point.

The outstanding cast includes: Eddie Stephens as Evan, who sets the tone of the production as a parole officer/advisor; Corydon Melgoza as Jason, a troubled society outcast for his many tattoos that adorn his body and for his frequent brushes with the criminal justice system; make him a ticking bomb waiting to explode; Cortez Johnson as Chris, also a past criminal justice system individual who is struggling to return to society; Mike Trulock as Stan, the bartender who runs but doesn’t own the bar, is charged with keeping the peace when things get out of hand as a result of the frustrations his patrons feel over the uncertainty of their jobs and their families.  I don’t know who is responsible for the authentic fight sequence in the Bar area, but it is one of the best-choreographed action scenes I’ve seen in a very long time.

Miguel Arballo as Oscar, the Puerto Rican the all-round bar-factotum employee; Theresa Jewett as factory floor worker Tracey and mother of Jason; Desiree Clarke as Cynthia, and mother of Chris; formerly a factory floor worker, who is recently elevated to be the floor workers Union representative, a step up the ladder that tests the friendship of Tracey, and Melanie Blue as Jessie, a besotted factory floor worker who made alcoholism her best friend as way of dulling the pain of her less than successful life; and a sensational Cary Thompson as Brucie, an addict, and father of Chris and ex-husband of Cynthia.  It’s a cast to die for.

In the technical and creative department led by director Shaw, the production features the incredible set design by Thomas L. Valach, that is enhanced by professional lighting designer Phil Murphy, allowing the costumes designs of Frank Cazares to be fully appreciated, along with the Hair and Make-up designs of Selene Colon and the Sound designs of Clark Dugger, who is also responsible for the informative projection designs that lend an extra element of detail to the production.  Often, attention to detail is what separates a good production from a great production. The Stage Manager is Sierra Barrick.   Well Done All!

“SWEAT” is an absorbing and profound production that grapples with the issues plaguing most of America’s workforce today.  The play performs at the Palm Springs Woman’s Club, in Palm Springs, and runs through March 8, 2020. It’s a Must-See Show! For reservations and ticket information, contact the box office at 760 – 322 – 0179.