Sonja Friseli's Aida Is Retired at the Met

The End of Aida As We Loved Her 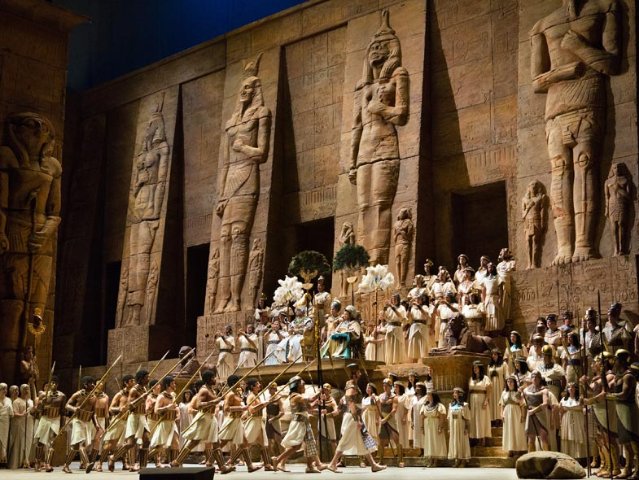 How lucky we are to hear the great Sondra Radvanovsky as Aida in the last performance of this glorious production at the Metropolitan Opera.  For someone who salivates over Cal Ripken, Jr. record breaking performance at Camden Yards, and Derek Jeter's last day at Wrigley Field, this evening is particularly poignant.  A production that satisfies on every level is being retired.  If it is not broken, break it.

This Aida production honors one of the greatest composers of all time, providing just the right forum for singers, even a tomb to die in comfortably and with enough air to sing at the same time.

The opera house was sold out.  Most performances this season have only played to half the house. Now it serves as a launching pad for General Manager Gelb's HD's which a greying and aging audience appreciates.  It's hard to see the Metropolitan Opera as the future of the form, particularly when perfect events like Friseli's Aida pack the theater and are canned, or buried.

Meanwhile the Met is reported to have spent over a million dollars on a new entrance for the super audience-donors and subscribers, so that they can feel special.  This may be appropriate for New York where nouveau riche money needs to feel special.  I have traveled throughout the country to other large cities and medium sized ones, and I can't find another audience that needs to segregate itself by the size of a bank account.

Radvanosky's singing was beauiful, with top notes that often started pianissmo and then were filled with bellowing air to dazzle the hall.  Olesyya Petrovoa warmed through the evening as Amneris and ended sad, yet triumphant.  Quinn Kelsey made you wish that Amonasro was a larger role.

Placido Domingo attracts audiences, but conducting is not his forte.  When the Verdi music was slow, he was extra slow.  When it speeded up, he raced through passages.  Most of the time singers and the conductor were lucky to land up together.

No matter.  As Radvanosky flung single stems of flowers to her enraptured audience, and Domingo clasped his very own bouquet to his breast, we knew we had shared a special evening.  Too bad it was the burial of Aida.  The two horses which lead the triumphal march were off to Boston to pull a funeral wagon the next day.  They had been parked on 10th Avenue for Aida's run this season.  We are sorry to see them go and regret that their final performance was this production of Aida's funeral.