A Slew of Interesting Piano Works 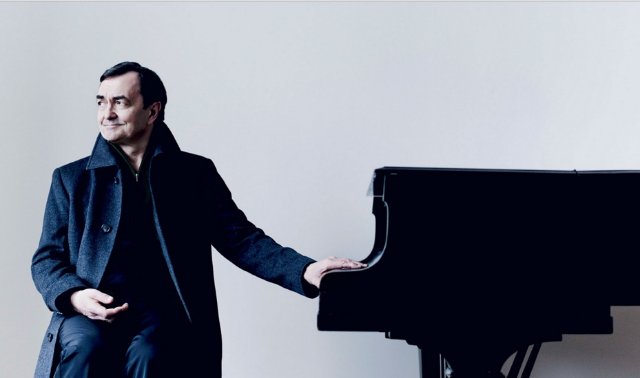 Aimard at Carnegie Hall
There is no question that the French pianist Pierre-Laurent Aimard is among the most innovative and forward thinking masters of the keyboard working today. However, Thursday night’s recital on the big stage of Carnegie Hall's Stern Auditorium was a bit of a puzzle, challenging to both the artist himself and the music lovers, aficionadoes and reviewers in attendance.
Aimard’s program opened with a slew of challenging piano works by four different composers. However these pieces: two by Nicolas Obukhov, two by Liszt and one each from Messiaen and Scriabin were stitched together in a crazy quilt of sound that played for a solid hour without break, pause or breath. With all of this innovation and chromaticism rocketing at the listener, the lines between these stylistically and historically diverse composers began to blur and disappear, leaving one to behold an overwhelming tapestry woven from all the colors in the sonic spectrum.

The two pieces by Obukhov, a successor to the mystic piano legacy of Scriabin who created his own notation system and labored in obscurity, were Carnegie Hall premieres. " Création d'or" was sharp-edged and spiky, with vast outer structures organized in a vertical manner for maximum sonic chaos. These guarded some tender, dreamy passages. "Révalation" was a series of six oblique passages for the keyboard, some with a furious energy, others mere wisps of notes and chords. These abruptly yielded to the hot-house colors of Liszt’s Nuages gris, and then to the watery impressionist splashes of Les jeux d’eaux à la Villa d’Este. This transition worked.

Then the Messiaen emerged: "Le Courlis Cendré", the portrait of a curlew from the composers vast Catologue d'Oiseaux. These ornithological works have just been recorded by Aimard, and benefit from being heard in a better context. Indeed, while the performance of Alexander Scriabin’s Sonata No. 5 was strange, searching and penetrative, it was a shame to see this great, challenging and severely underperformed single movement treats as a kind of programmatic afterthought.

If the first half of the program featured a bizarre blur of colors, the second was decidedly black-and-white. Aimard balanced his flight of chromatic fancy with Beethoven's sober, rigorous and damned difficult Hammerklavier Sonata, the four-movement forty-five minute monster that remains the K2 of that composer's solo piano music. (The Diabelli Variations may be regarded as Everest, but more people die climbing K2.)
Aimard started his ascent with ambition and drive, drawing out the contrasting musical ideas in the first movement and finding that sweet spot of almost Zen-like calm in the middle of all the thunder and bluster. This sense of struggle to achieve real peace is essential to late Beethoven, reflective of the composer's own struggle with disability and artistic triumph. The Scherzo was short but profound, seeming to cut off in the middle of its recapitulation as if the composer had suddenly turned to other matters. (This is a deliberate effect, written into the score and it remains unsettling.)

This happy state of uncertainty would not last.  Aimard took a fierce, even brutal approach to the last movement, approaching these fugal passages with a crude energy that bordered on carelessness. Beethoven's chords were reduced to mere tone clusters, and the whole performance became a bold assauld on the work itself. After a brief lyric respite, the assault continued, muddled and blurred in the final passages. A brief, bizarre encore followed: Letters to Susan by György Kurtag. This was accompaniment to an odd spectacle, two concertgoers leaving slowly, but determinedly to the funereal dirge of Aimard's playing.

(Reprinted by permission of Superconductor).
Back to Front Page Section Home