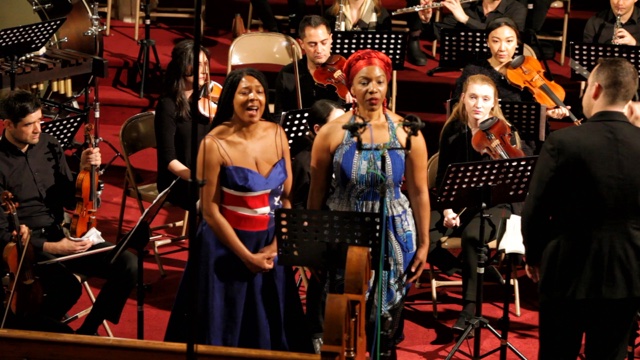 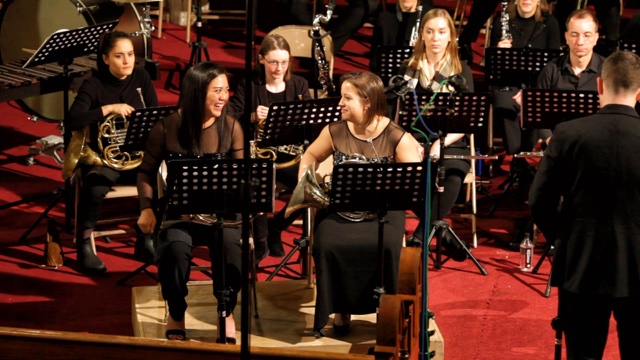 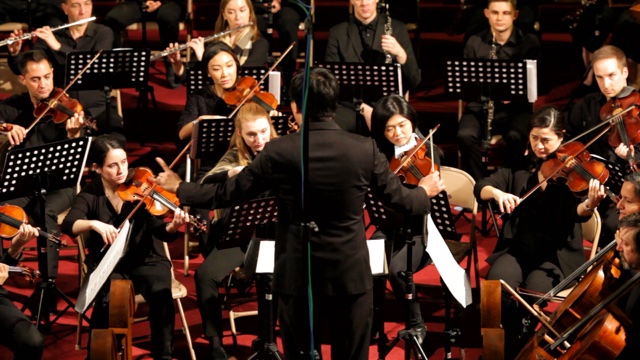 If you are just meeting this very special orchestra, The Chelsea Symphony (TCS),  you will be struck immediately by the collegiality among the instrumentalists. If you take time to discover how programs are put together, you will see the performing artists honored for their contributions to the orchestra by showing up regularly (monthly concerts are performed) and by staffing the organization as marketing gurus and book keeping wizards, among other functions.

Artists who perform regularly also get a chance to compose and hear their works performed by the symphony.

This evening, part of the Rise Up Year (2019-20),  is  devoted to music that inspires and uplifts, two gentleman, a bass player and a violist, composed pieces celebrating women.

Tim Kiah musicalized a speech by Sojourner Truth at the Women’s Rights Convention in Akron, Ohio in 1851.  Separated into three main sections, Kiah begins explaining her name. “Truth, because I was to declare Truth to the people..Sojourner, because I was to travel the land showing people their sins, and being a sign unto them.”  Sojourner planned to spread the word of God and to speak out against slavery.

The middle section picks up with the first phrase of her speech:  “What’s all this talking about?”  Rights for women and rights for slaves are being discussed at the same time.

And Kiah choses as his ending, “…let’s turn it back again and get it right side up again.’

Hearing the two horn players that followed in violist Michael Boyman's Double Concerto, made you feel that things were right side up! Jessica Santiago and Emily Wong blew their hearts out on this piece. They undertook the entire history of French horn playing, from rhythmic and lyrical Fanfares, to a chorale with two bassoons.  The hunt finale recalls all the hunts of Mozart other horn composers like Strauss’ horn concerti and tone poems,  and Wagner, and Beethoven.

Santiago is enthusiastic about The Chelsea Symphony.  "It’s all I’ve ever wanted in an orchestra. The people, level of musicianship, repertoire and leadership is what makes Chelsea so unique in my eyes! When Michael approached Emily and I about writing a piece for solo horns I said yes right away! I have been eager to solo with Chelsea and love performing new music. I have always enjoyed performing Michael’s compositions with TCS and this double horn concerto is no different."

In the second part of the program, we heard River Rouge Transfiguration by Missy Mazzoli, a musical love poem to Detroit.  Mazzoli, always a rich digger in the archives, has been inspired by a novel which in turn grew out of a 1793 song of the Swiss guards.  “Our life is a journey through winter and night, we look for a way in a sky without light," begins the novel.  As the work is performed by TCS, the darkness we associate with Mazzoli is accompanied by a way to the sky.

The strings tremble as woodwinds peep and then we hear deep tones. Delightful tunes come from marimba and chimes. Mazzoli often underpins with deep tones and tops with beauty. Here horns add rich phrases.  Plucked strings accent against swells of the full orchestra.  Phrases often end abruptly, capturing our attention.  A seven note toot sits on a  long held string tone.  The TCS captures Mazzoli’s signature loveliness against the industrial harshness of a city like Detroit, the work's inspiration.  The piece ends with a smile, three charming notes.

Elegia Andina followed. Celebrating people from many cultures, Gabriella Lena Frank combines a woody block beat alternating with strings. The flute stands in for doublerow Peruvian panpipes. Jazz rhythms combine with classic Bach Bros.  Growling basses beat it out with strings and the horns calling out.  The TCS made this work swing.

To end the evening Joan Tower’s Made in America was performed.  Tower takes America the Beautiful and gives it music both the beautiful and the much less so. We hear the conflicts we have always had in this country between spacious skies and amber waves of grain against the Agent Oranges we often produce.  The struggle is captured by TCS, leaving us in the end hopeful that the purple mountains majesty will win.

Mark Seto and Matthew Aubin conducted, both neat and tidy.  They invite the orchestra's expansive interpretations.

The Chelsea Symphony is a treat to hear.  Their next concerts are on May 15 and 16, and titled “We Can Be Heroes.”  The May 16 concert will feature a world premiere by Kamala Sakaram. It is sure to be special.