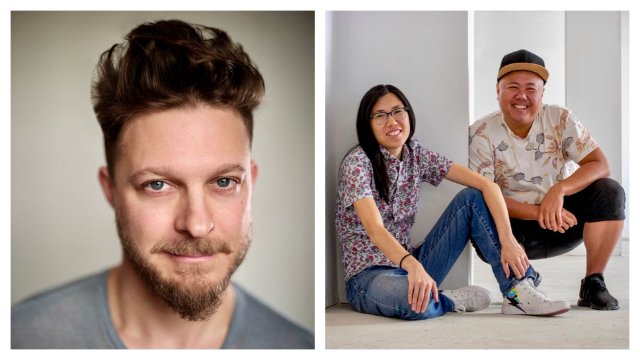 Here are Benjamin Scheuer, Melissa Li, and Kit Yan, the winners of this year's Kleban Prize for Musical Theatre.

Indeed, these individuals have each earned the 2021 Kleban Prize for Musical Theatre. The honor’s namesake is Edward L. Kleban. He is the late Tony and Pulitzer Prize-winning lyricist of the musical A Chorus Line. Kleban’s will made provisions for the annual prizes.

People can become more familiar with the work of Li, Scheuer, and Yan when the theater community honors them during the 31st annual presentation of the Kleban Prize for Musical Theatre. The free streaming event will take place at 7 p.m. EST on Monday, March 15. To stream the presentation at Broadway On Demand, visit https://www.broadwayondemand.com/pages/home-2/d/shows-2. For those unable to attend the streaming event on Broadway on Demand, visit www.NewDramatists.org/Kleban-Prize-Musical-Theatre starting at 10 a.m. EST on Tuesday, March 16.

Unlike other awards, the Kleban Prize does not recognize a specific work or works already completed. Rather, it acknowledges the excellence of past work – while anticipating work yet to come.

Since the award’s inception more than 30 years ago, judging panels comprised of respected theater artists and administrators have selected Kleban Prize winners. This year, the judges were actor Raul Esparza, librettist Mike Lew, as well as actor-director Seret Scott.

“Kleban Prize winners are the artists who are going to define the art form for years to come,” said Tony Award winner Richard Maltby Jr., the Kleban Foundation’s president. “We celebrate them, their fresh perspectives, and creative energy that will be so very important to the theater when it returns.”

Kleban recognized that “theatrical wordsmiths had the hardest time supporting themselves while honing their craft,” Maltby said. “And so, the Kleban awards are specifically for librettists and lyricists.”

Bios of the winners appear below.