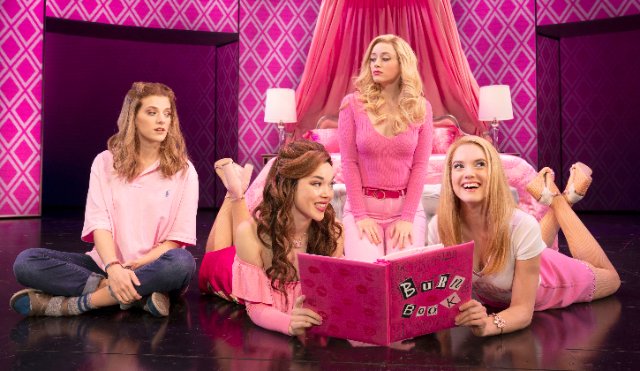 Photo by Joan Marcus The principal characters from Mean Girls hang out and plot. 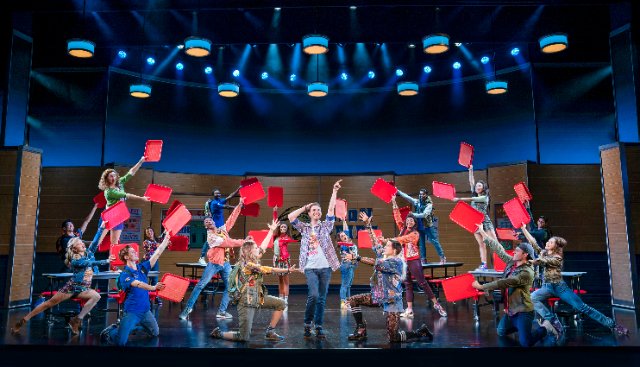 Photo by Joan Marcus One of the dance sequences in Mean Girls involves red trays. 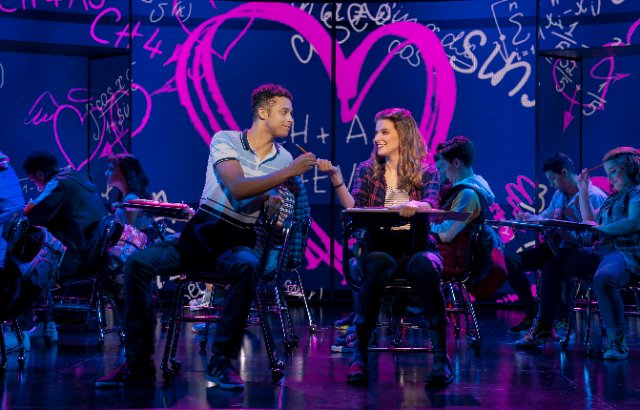 Let’s say you are part of an audience watching the energetic, entertaining, savage and explosive stage musical adaptation of the widely-known 2004 movie, Mean Girls.

And you’re a newbie.

More specifically, you’re a member of the rare species that is as unfamiliar with this tale as the often-savage world of high school in present-day America is foreign to Cady Heron.

The reality is, it doesn’t matter.

Indeed, even if you’ve never seen the film, or never heard of Mean Girls, you can still find entertainment value and meaning amid the menagerie populating the halls of fictitious North Shore High School near Chicago.

The opening lyrics of the stage musical neatly (perhaps too neatly) lay out why this show might matter to you.

Immediately, we start pondering questions such as how far we’d go to fit in, become popular and whether temptation is something we can resist.

For those green when it comes to Mean Girls, teen Cady Heron spent 13 years of her life in Africa. There, her zoologist parents researched animals. But after they lost funding, they moved back to America. Then, they sent their daughter to a different type of wilderness: high school.

Within its various cliques, some reign, prowl, growl, lurk, pounce and then feast on easy prey.

The pecking order is clear. And those new and unfamiliar with the territory can become easy kill.

Chances are, book writer and film screenwriter Tina Fey, of Saturday Night Live , didn’t use “Lions” as the school’s mascot name by accident.

“It’s a cautionary tale of fear and lust, and pride,” student Janis sings at the beginning. By the way, “pride” is a clever term here; some of the female characters, particularly Regina, are like lionesses.

Those planning to attend the blistering, hip, and funny equity national touring production of the stage adaptation, currently docked in Ft. Lauderdale, may really want to look closely for the nearest exit pre-curtain.

Sure, explosions of pink permeate the production’s many projection screens and spill onto the stage. But you won’t find a single girl daintily playing with a doll or navigating a sugary world, such as the one we enter in Legally Blonde. No, the pink that suffuses this show can be pernicious – to the psyche and the body. In fact, Regina George, the toxic leader of the The Plastics, finds that out in a lesson on what can happen when you ostracize someone seemingly naïve, yet bright and ambitious.

One particularly effective projection (Finn Ross and Adam Young are the video designers) shows a seemingly real bus in an impressively authentic looking environment speeding and hitting Regina with full force. Draw your own conclusions, but one could argue that Cady, who becomes The Plastics new “Queen Bee,” caused the accident.

Meanwhile, in another effective use of projection design, a pink spotlight illuminates an all-powerful Regina, towering above everyone else. The pink light bleeds into the projection screen, seemingly aglow with flames. Surely, this merciless girl must have super powers when she sings the at first chilling and moody, but eventually hard-charging “World Burn.” Its vivid lyrics neatly illustrate how twisted Regina’s mind can become when revenge is her mission.

But Regina isn’t the only character with a burning goal.

Clearly, from the show’s beginning, Cady’s not content with the status-quo. She sings in an “I Want” song about “a fire igniting me…it’s a very recent feeling but it’s running through my body and it roars, it roars.”

Specifically, she's singing about wanting to escape the African savanna that has been her and her folks’ home for 13 years. During the number, in a playful nod to The Lion King that should delight musical theater fans, authentic-looking animals strut across the stage.

Cady’s inner “roar” resurfaces at her American high school, when she desires to replace Regina as head of The Plastics.

Speaking of desire, the forceful dancing and the production’s rapidly moving, cinematic flow reinforces the characters’ determination and drive.

It’s difficult to differentiate projection design and scenic design in this production. That’s because much of the scenery appears to be built into projections. For instance, for the mall scene, the stores, stairs and signs don’t seem like actual objects which we can reach out and touch on stage.

True traditionalists, who demand a 100 percent “live” sense of theater, may not appreciate the set design. Even so, it all looks impressively authentic. Moreover, it allows for scene changes to occur seamlessly.

And the projections help illustrate how fast messages on social media spread. Similar to scenes from Dear Evan Hansen, the projections sometimes become inundated with social media posts. Judging from reading them, Fey demonstrates a keen understanding of how young people these days communicate via social media.

While this show is generally faithful to the movie, the musical includes updated references and jokes that are clever and make more sense in modern times.

Gretchen: Sometimes I feel like an iPhone without a case. Like, I know I’m worth a lot, and I have a lot of  good functions, but at any time I could just shatter.

Visual surprises abound. In fact, one could debate whether this show bombards us with too many. Certainly, proponents of story theater and minimalism might have an argument.

Clearly, though, the story never gets lost in the visuals. Instead, it's hard to comprehend lyrics when the performers sing passionately and forcefully. Either the acoustics at the Broward Center for the Performing Arts are bad, or sound designer Briana Ronan has work to do. Specifically, she needs to ensure that every audience member clearly comprehends all lyrics and spoken words.

It’s hard to find much fault with the large cast. These triple-threat performers generally possess rangy, powerful voices. And they emote well through song, with a rich-sounding live orchestra backing them.

Also, the performers dance with verve and flair, while credibly embodying their characters.

In particular, the actors embodying the principal characters shine.

As Regina, Mariah Rose Faith’s intense eyes look as though they’re about to shoot daggers. In addition, the actress speaks with a sharp, penetrating voice. Likely, it would instill fear in most people, and perhaps even make them freeze. The performer’s posture reinforces Regina’s commanding personality. But as fearsome and one-dimensional as Regina seems, Faith ensures that we also witness the character's vulnerability. This is especially after Regina's bus accident.

In contrast to Faith's vicious Regina, Danielle Wade projects an idealistic, sunny personality as Cady, particularly during her opening number. Wade’s Cady projects optimism and ambition and an unwillingness to take “No” for an answer.

When Cady takes over Regina’s position as The Plastics’ “Queen Bee,” Wade becomes more assertive. However, she isn’t nearly as ruthless or threatening as Faith’s Regina.

Meanwhile, Megan Masako Haley doesn’t try to  make her character, Gretchen, match or top her superior’s intensity. Rather, Haley makes Gretchen’s nervousness palpable. Her Gretchen is particularly insecure and vulnerable while singing “What’s Wrong With Me.”

Turning to the male actors, Adante Carter’s affable disposition as Aaron Samuels demonstrates why girls would want him as their boyfriend.

Composer Jeff Richmond and lyricist Nell Benjamin’s score doesn’t include memorable or hummable songs. However, the musical numbers are unique for each character. In addition, the songs help these fictional people to more fully express their emotions.

Speaking of feelings and emotions, newcomers to Mean Girls don't have to feel intimidated amid the story's legions of fans.

Guaranteed: None of Mean Girls' aficionados and fans will threaten newbies with a burn book entry.

The equity national tour of Mean Girls continues at Ft. Lauderdale's Broward Center for the Performing Arts through March 15. To buy tickets, and for a list of dates, times, and venues, visit https://meangirlsonbroadway.com/tour.