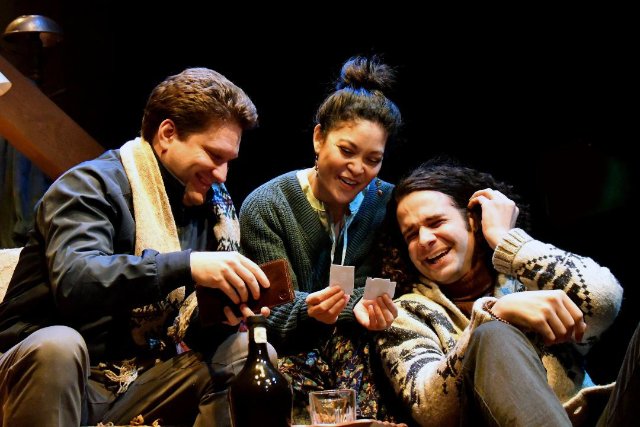 Every family is condemned to live with its own unique traits, its own unique secrets, its own unique pain.  Alyosha Zim writes of his family experience – a gemischt of dogma and spriritualism with inherited Judaism and adopted Buddhism; the challenges of love and relationships; and the overhang of a disease that if contracted is debilitating and ultimately fatal.  Although sadness pervades the play, it holds the attention throughout and fully satisfies on many levels thanks to great writing and formidable acting.

In part, “Red Winged Blackbird” is a classic play about two special generations of Americans – the parents being from the “greatest generation” who sacrifice all for their progeny, and the children being of the loving but self-indulgent “flower power” generation.  Sidney is a Jewish World War II refugee who lost virtually all of his family in the Holocaust.  Anchored in that tragedy, its gravity acts as a benchmark for evaluating everything in life.  Working hard in a deli, but valuing education and accomplishment, Sidney’s anguish and the hope that his children will have a better life are poignantly captured by Jullian Lopez-Morillas.  But like many of his era, his measuring sticks use orthodox values.  While Lopez-Morillas’s character is not sympathisch, we can’t help but respect how he has led his life.

Alyosha, born Sheldon but ultimately adopting a new identity from Dostoevsky’s spiritual Karamazov brother, has largely adopted the father’s values and achieved his desires, becoming a psychiatrist.  He’s retained an albeit diluted association with the Jewish faith and practice, like many American-born Jews.  He will also be the responsible one to stay near home to help his parents with their considerable needs.  But often it is the wayward child that a parent loves the most.  Harold, who takes on the name of Joshua, has disappointed by squandering the Harvard education that his father has afforded him; rejecting traditional religion; adopting a Buddhist lifestyle which the father scorns; and fleeing responsibility by migrating to an isolated aerie in Colorado.

The brothers are chalk and cheese, clashing on many issues.  They represent the changing landscape brought on by the ‘60s in which new values took root with some, but old ones remained with others.  In many ways, the play is about brotherly love, but it shows how circumstances can drive a wedge into a relationship.  A common bond is that each feels guilty about the ultimate death of a parent.  Aaron Wilton as the stiff, hard-working Alyosha, and Adam Magill as the laid back, but depressive counterculturist Joshua are fine fits for the roles.

But the 800-pound gorilla in the room is Huntington’s Disease, which degenerates the brain tissue, causing uncontrollable movement and mental and emotional deterioration.  Huntington’s is inherited.  The brothers’ mother suffers from the disease.  There is a 50/50 chance that either of them would contract it.   If one were to manifest it, the same odds would apply to his children.  It acts as a constant dark cloud over Alyosha and Joshua.

All of the acting in “Red Winged Blackbird” is noteworthy, including the two non-family members.  Rinabeth Apostol charms as Padma, Joshua’s soul mate and ardent supporter.  Ogie Zulueta fulfills as Rinpoche, Buddhist guru to the couple, and the comic relief who even rebukes Joshua for overdoing his spiritual commitment.

However, Danielle Levin as Eva, wife of Sidney and mother to the young men, is absolutely chilling.  Her contortions and thrashing as she struggles with the disease are heartbreakingly convincing – the endless jerky motion enervating.  Imagine suffering years from this condition.  As observed in the play, it gives so little time to living and so long to dying.

For scattered brief moments we see Eva before the disease set in.  Levin’s transformation is powerful as a totally different person wearing the same skin.  Oblivious to her fate, she broadly smiles with chirpy optimism, and patters on like a stereotypical Brooklyn immigrant mother of the era.  Great stuff.

Set initially in the late ‘60s, the play takes us forward to the mid ‘80s.  Much has transpired and critical points are reached.  The red winged blackbird symbolizes powerful forces within us that enable us to meet challenges and become stronger as a result.  The question is who in the family achieves that state.

As producer, Zim has assembled a formidable creative team.  Director Nancy Carlin marshals her resources well, notably Nina Ball’s clever set that incorporates two domestic settings and a Buddhist shine in a multitiered set.  Also, the music in Cliff Caruthers sound design adds a Jewish feel to the proceedings.  Carlin also helped shape the script of a series of flashbacks into a tight and entertaining drama.