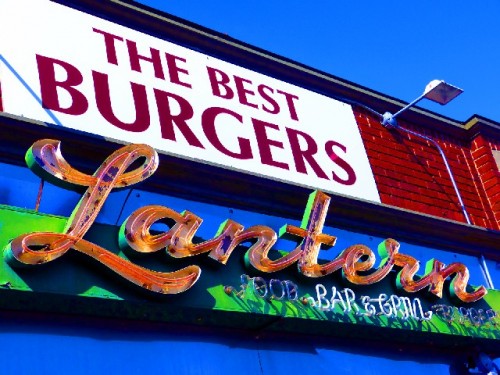 The Lantern claims to have the best burgers. 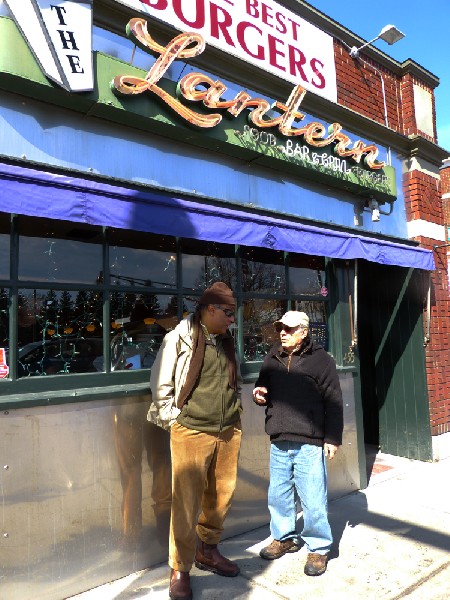 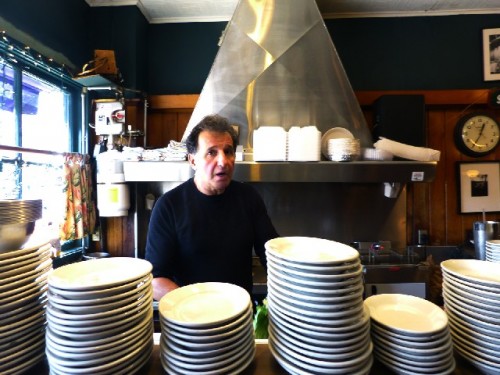 Owner/ chef Mark Papas behind a stack of plates. 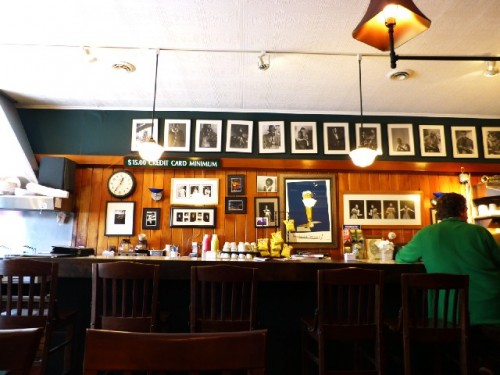 Jazz photos behind the counter. 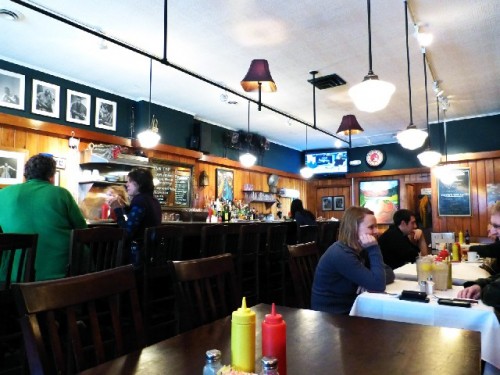 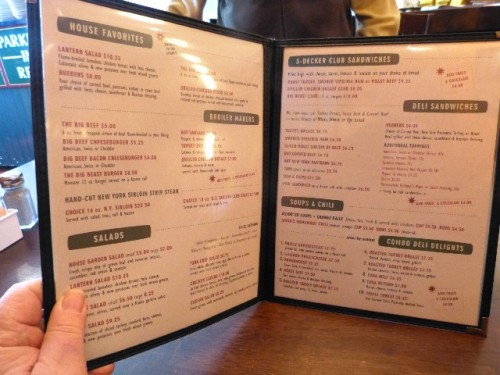 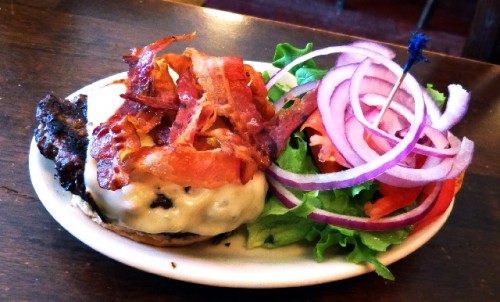 The a la carte cheeseburger with bacon. 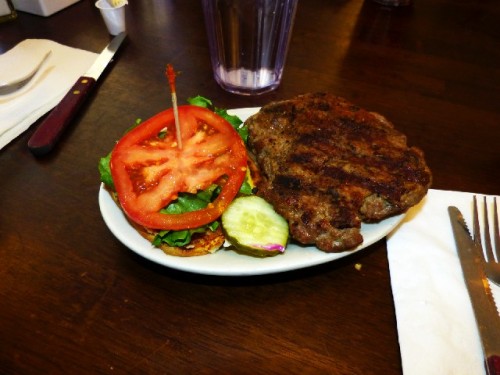 The turkey burger was over cooked and dry. 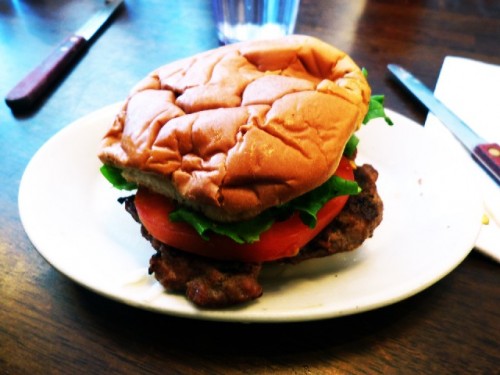 The bun was a total disaster. 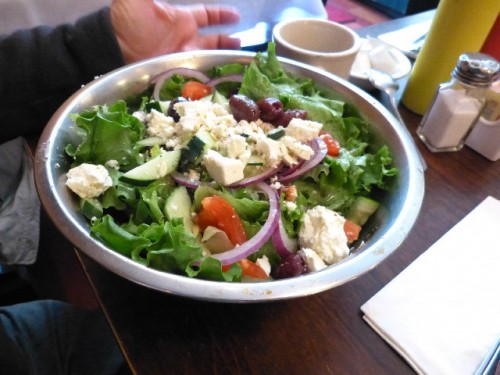 The large Greek salad was enormous and fresh. 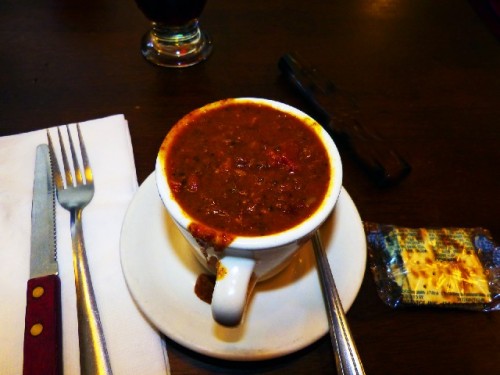 The cup of chili lacked flavor with overcooked beans and no hint of meat or cumin.

Founded in 1926 The Lantern Bar and Grill has been a favorite of locals for a modest lunch or quick dinner.

It claims to have the best burgers in the Berkshires so that was the mandate for a visit of the Pit Bulls joined this time by our friend Miguel. A contrarian, he ordered a salad.

What distinguishes The Lantern from other burger joints is that they are hand formed from freshly ground beef. The resultant meaty texture is head and shoulders above all others. But, because of code regulations, the meat is served medium plus with no pink as one would have when grilling at home. That makes it impossible to get a nice, rare, juicy burger.

He is a jazz fan and we always enjoy identifying the many photographs.

On a slow day you can engage him in a conversation about his favorite jazz artists.

The ambiance is simple. It consists of a long bar/ counter and a single line of tables. It’s a two person operation with Mike on the grill and a single waitress. On our visit she was pleasant and efficient if a bit brusque and screwed up an order.

It’s a fun place with the guys but my wife won’t go there even for a quick bite before Barrington Stage. It’s OK for a casual date but not if you’re trying to impress her.

Given a combination of ambiance and price, as well as a full bar, its one of the better casual options in Pittsfield. Good but not great.

Pancho: Good meat. Nice botanicals. Nice to have sliced onion and lettuce which are fresh and crisp. The meat is hand packed. Not a frozen patty. Just a shade dry. The lean meat doesn’t have quite enough fat to make it juicy. The bun was a disaster. It started to fall apart on the second bite.

That kind of burger (Bacon Big Beef Cheeseburger, $5.75) has to be on a Kaiser roll.

The Lantern is also known for its Reuben ($7.25 with $4 to add fries and cole slaw which puts it into the $11.25 range.) On Thursdays I often meet with my mates at Linda’s Café in North Adams, opposite the Eclipse Mill on Route Two, headed up the mountain. They feature the best in the Berkshires Reuben ($6.95) nice and thick with meat and loaded with sauerkraut. And it comes with fries. I’m cutting back on fries. This week I asked for an alternative and got hash browns. They were nice and crispy off the grill.

Pancho: As a former New Yorker I never order a Reuben. I was spoiled by Katz’s (Reuben $17.45) on Houston Street, as well as the Carnegie Deli and the Second Avenue deli.

Cisco: For me the best pastrami sandwich in North America is Schwartz’s on St. Laurent Street in Montreal. They call it smoked meat ($6.95) and serve it lean or fatty as a sandwich or a stack of meat (large plate $14.95) with a pile of slices of rye bread to make your own. (Extra for sides.) It's a Kosher deli so it doesn't have Reubens which call for cheese which is dairy. That's strictly a New York thing. The downtown deli Ben’s is also good but not as great.

Pancho: So the Lantern may have the best burger in town but it could be improved.

Cisco: I ordered a cup of chili. This summer I asked for it but it’s not served during the summer. I had tried it some time back but wanted to refresh my memory. Miguel also tried it. I asked for a cup of (Mark’s Homemade Chili, medium strength, cup $3.50, bowl $4.50). The waitress asked if I wanted it with cheese. It came without cheese.

The chili was boring. It tasted like it had been sitting around and was overcooked. There was no texture to the beans. The menu says “medium” but should say “bland.” There was no heat or taste of chili or cumin and no evidence of meat.

Miguel: For me it has no flavor and I didn’t get a sense of the beans. My wife makes great chili so I am spoiled. Next time I wouldn’t order it.

I ordered the Greek Salad (small $6.00, large $7.65). The (large) portion was huge. I couldn’t finish it. All of the ingredients were terrific starting with nice crisp lettuce. There was a generous serving of feta cheese and olives. The dressing was nice.

Cisco: I usually order the Greek Salad but have found that the proportion of oil is a bit overwhelming.

Pancho: What about the acidity?

Miguel: I liked the dressing and would order it again the next time. I’ve had it here before.

Cisco: For health reasons I am cutting back on red meat. So I ordered the Turkey Burger ($5.25). For a turkey burger it was very good. But since turkey is lean and has no fat the burger, while crispy and nicely grilled, was over cooked and dry. The lettuce and tomato toppings were fine. But again the bun was an utter disaster and the sandwich just fell apart. They definitely need to upgrade the rolls even if it means charging a bit more.

Miguel: Next time I come if I order a burger I’m going to bring my own roll.