The Book Club by Karen Zacarias 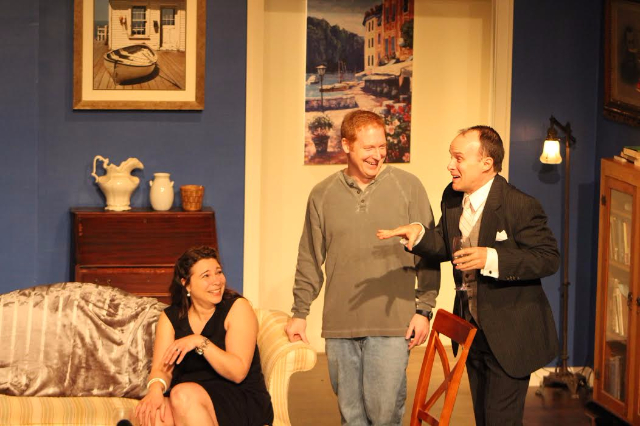 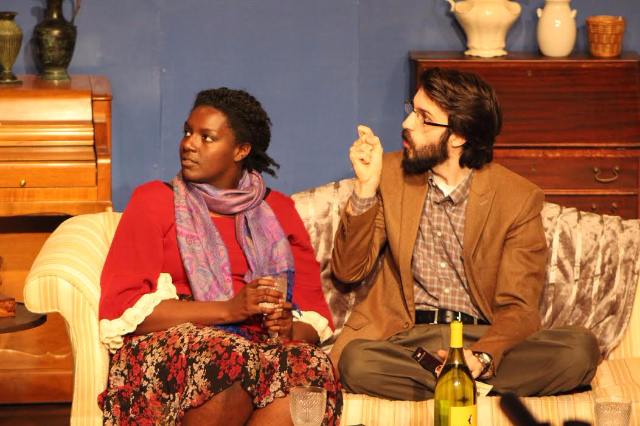 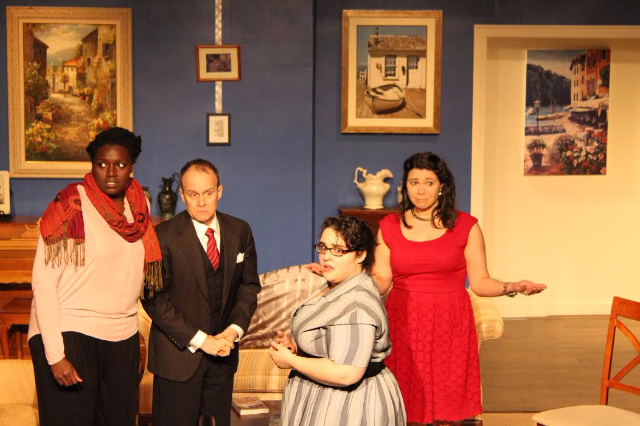 Kirk Jackson has succinctly directed a production of The Book Club by Karen Zacarias.  This little known curiosity piece finds a perfect setting in the Freight Depot black box theater at Hubbard Hall where the audience cannot exceed 50, and feels cozy even with a half house.  The set, designed and built by Benjie White, displays a slice of a rather cluttered living room which is where the six main participants of the book club hold their fortnightly meetings. The jokes are light and Zacarias provides enough insight into the plots of each novel that the unread audience is not left in the dark.

The play begins with Ana, (Megan Demarest), introducing the club that she founded with a mini-monologue dripping with mission and overstated importance as is the stereotype of almost any non-profit director. Quickly the audience realizes that her put-on speech is delivered for a camera in the back of the room, the main comedic device of this play. This book club has been selected to provide fodder for a famous documentary film director and through the lens of his surveillance, we witness this group of shy and self-aware friends try, but quickly fail, to present an untarnished veneer of elevated speech and academic conduct.

Much to the chagrin of Ana, her version of a perfect book club begins to crumble when one of the members suggests Twilight, the best-selling pop novel about vampires, as the next read.  The divergence from traditional classic literature enables all of the members to begin to reexamine themselves and their own tastes, which, of course, is exactly what a good book club should do.

The first act of Book Club is snappy and witty in large part thanks to the energy of Demarest and Oliver Wadsworth who plays Will, Ana’s best friend.  Wadsworth, by far the most experienced actor on stage, owns his quirky role entirely, demands attention when appropriate and cedes attention when necessary to his less experienced compatriots.  Erin Ouellette is also notable in her understated portrayal of Jen, the socially awkward legal clerk with a scandalous sexual history.  Morgan Morse is refreshingly easy to watch in his enthusiastic, geeky and sincere depiction of Alex, the newest member of the book club.

The book club meetings that we are privy to take place over the course of three months and so there are necessary costume changes in between. Costume Designer Richard MacPike did the best with what he could muster, even if some of the skirts could have been a bit longer.  The Pundit (Catherine Seely) provides the comic interlude during these changes, portraying five characters with differing takes on what it means to be in a book club.  Seeley gives this shapeshifting role a game try, and while her dialect work has a ways to go, on Saturday she improved with each passing iteration: Editor, Secret Service Agent, Librarian, Jailbird, and Walmart employee. By the last, she earned well deserved guffaws from the audience.

Director Kirk Jackson does an excellent job of moving the players around a tiny space and insists that stakes be kept high.  Life without the book club is no life at all.  This sets us up to expect a hilarious romp throughout, and yet, through no fault of his own, the second act devolves into an overblown drama.  As the book club falls apart, so does Ana’s life; as she loses herself and reevaluates her place among her peers (all on camera, mind you) she is reduced from a controlling force of nature to a sniveling approval seeker (all of which Demarest handles quite well, even if the writing does nothing to help her).  The play ends with a drawn out Walton-esque feel-good vibe, and while neat and tidy, is worthy of a few eye-rolls.

Despite all this, The Book Club will hold your attention, make you laugh and will bring up interesting cultural points of contention about what exactly is literature and what makes something worth consuming.  Nothing is perfect, but that does not mean it isn’t enjoyable.

The Book Club plays for one more weekend in the Freight Depot at Hubbard Hall in Cambridge, NY.