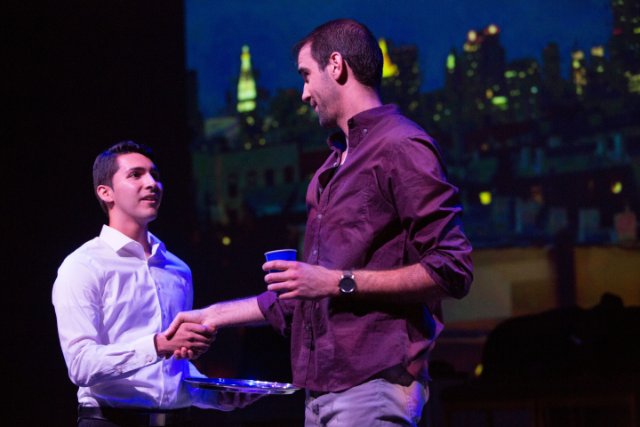 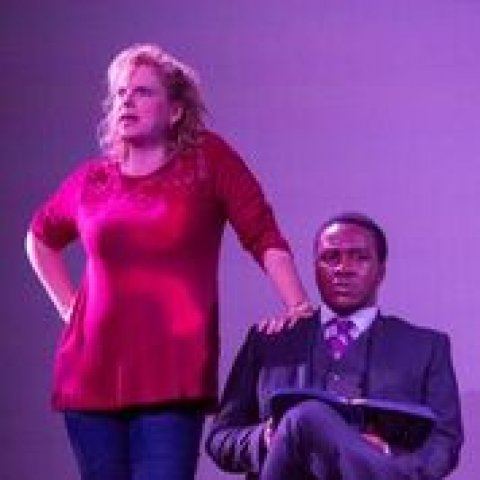 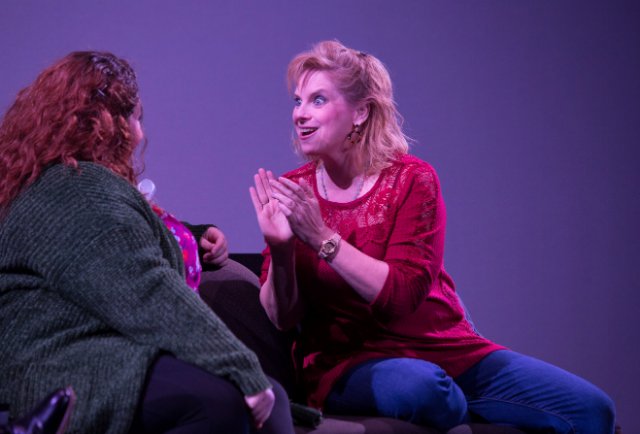 (Photo by Gina Fontana) Despite the grim situation in which they find themselves, the characters in Next Fall find ways to remain strong. Here, Arlene (Siobhan Nolan) animatedly talks with Holly (Kat Gold).

If Geoffrey Nauffts had written his award-winning dramedy, Next Fall, as a straightforward “Meet the Parents” –or, in this case, “Come out to the Parents” – piece, the play would still have proved a vital work of gay theater.

Surely, it would further solidify long-term homosexual relationships and marriage as becoming increasingly the norm. Further, it would prove that same-sex couples living together, married or not, are experiencing the same highs and lows, issues and concerns with which heterosexual couples deal.

However, Nauffts apparently wasn’t satisfied with a straightforward “coming out” approach. Instead, he became more daring by adding a layer.

Specifically, instead of a gay person shocking his conservative parents by revealing his boyfriend, the playwright made his play richer by adding an inner conflict.  And it’s a struggle that is worth exploring within the gay theater cannon. What if someone who is gay is also devoutly Christian? Suppose such a person feels guilty about the relationship? Perhaps, he or she is so strong a believer that the individual prays for forgiveness following sex?

Nauffts presents us with such a character in Next Fall. It is receiving an uneven production by the Pompano Beach-based, professional Outre Theatre Company in Pompano Beach.

Outre is staging Nauffts’ engaging and heartbreaking work through March 31. While the production often falls short, it features strong moments. They will cause you to laugh at times, and cry during others.

In Next Fall, Nauffts deviates from a traditional linear narrative structure. The play begins in the present. Middle-aged actor Luke (Charlie Alguera) is in a New York City hospital in a coma following surgery. He has just suffered head trauma following a car accident. Meanwhile, his boyfriend, candle salesman Adam, and their friends, sit anxiously and helplessly in the waiting room. They are outside the intensive care unit, waiting for news.

Throughout his play, Nauffts oscillates between past and present. In particular, we witness scenes from the five years leading up to the accident and its tragic result. Meanwhile, present-day scenes take place in the hospital.

By including moments from the past, the playwright allows audiences to familiarize themselves with Luke and Adam, their relationship and the people in their life.

But Next Fall is not just a romantic comedy-drama. It’s also tragicomic. At times it’s funny, while at others, it is a brutally honest and serious, relatable tale.

The play is about, among other things, unconditional love as well as how our connection with God and faith shapes us as human beings and affects our relationships with others – and ourselves. Also, the piece shows how our faith – or lack thereof – can influence our attitudes about topics nobody wants to contemplate. They include sickness and death.

To his credit, Nauffts doesn’t glorify his characters. Nor does he judge them, or us. Rather, the people populating his play are imperfect, yet relatable.

Surely, folks who’ve experienced fraught relationships with parents will identify with the conflict between Luke and his father (Kevin Reilley). And if you question God’s existence, or turn to religion mainly during rough times, you’ll likely relate. Without question, if you’ve ever had to make the heart-shattering decision about when to pull the plug, you’ll leave the theater unsettled. Of course, Nauffts offers no easy answers, because there aren’t any.

No doubt, Next Fall is an upsetting, painfully honest tale about life’s fragility and unpredictability. And it’s no coincidence that the comatose Luke once appeared in Thornton Wilder’s Our Town as the Stage Manager.

But credit Nauffts. He leavens the dark material with comic dialogue. He seems to be saying that in such a bleak, unfathomable situation, one needs humor. It’s a tonic to help you make it through not just each day, but each moment.

One of the shortcomings of Outre’s production is that the lighting is practically always dark and shadowy. Variety would help contrast the lighter, more hopeful moments with the dire, hopeless ones.

Another production weakness is that some cast members speak so softly at times, it’s hard to understand them. Now, it’s plausible, especially in the waiting room scenes, that they’ve become so weary from grief, they are bereft of energy to even speak audibly.

If cast members were wearing microphones, this wouldn’t be as big an issue. One questionable choice exacerbating the problem is that the platform standing for the waiting room is too far from the audience. Director Skye Whitcomb could have easily moved the platform closer to the audience. This would create a more intimate, visceral experience. Instead, waiting room scenes take place on the distant platform. Meanwhile, moments set during the five years leading up to the present take place off-stage, closer to the audience.

Why not just put the two spaces side by side, closer to the audience? Doing so would, among other things, allow for more seamless transitions between past and present.

In regards to acting, cast members succeed in some areas more than others. In particular, they need to make their characters more three-dimensional.

Reilley’s Butch too frequently comes across as merely an unsteady, irresponsible man. It’s as though he’s had a few too many beers. And Reilly, a veteran, highly-regarded, award-winning South Florida actor, conveys little emotional depth or sincerity. For instance, there’s a moment involving a reconciliation between father and son. It should feel and sound cathartic. Unfortunately, powerful, sincere emotion is absent. On the plus side, Butch’s literal collapse after the tragic ending seems completely believable. It is heartbreaking.

Naturally, we’re heartbroken to hear that anyone is in a coma as a result of illness or an accident. That is especially true for someone as young as Luke. But, if we truly understand and sympathize with him, our hearts are all the more shattered.

Unfortunately, Alguera, as Luke before the accident, speaks too quietly for an audience to consistently understand him. He needs to enunciate more. Also, Alguera’s Luke comes across as too aloof and brooding to be consistently likable. On the positive side, Alguera, at times, imbues Luke with a sweet vulnerability .

Meanwhile, Stephen Kaiser offers one of the stronger performances. He invests the agnostic or atheist Adam with a believable jaded attitude when it comes to faith. Also, the actor lends him a fun-loving, laid back air. In addition, he is convincing as a hypochondriac and we sense sincere dread from Adam during the final, heart-shattering scene.

As Arlene, Siobhan Nolan’s dazed, worried expression speaks loudly about the state this poor mother is in. The actor is also credible as a chatterbox.

Kat Gold steals most scenes as the loud, commanding Holly. But she also succeeds in imparting a weariness and understated sadness.

The character of Brandon might speak the fewest words. However,  Zac Gowdie offers the strongest individual performance. His telling facial expressions convey bitterness, tension and annoyance stronger than words can. It’s clear, through the actor’s expressions and voice, that this man has been harboring deeply hurt feelings.

Whitcomb directs without sentimentality, but with sensitivity. He makes some smart choices. For instance, a character clutches a Bible, as though it’s her only comfort during this unspeakably difficult time. Also, characters hold hands and grasp each other for support.

Scenic designer Jordon Armstrong’s strongest work comes in the form of a large, white, thick, seemingly impenetrable curtain. This symbolic backdrop seems like a formidable, stifling, thick separation between the characters and the comatose Luke. As much as his friends would like to be with him and receive updates about his condition, they feel stifled and seperated. Moreover, the curtain’s white color can symbolize death.

No doubt, death looms large in this play. But as dark as it is, there’s a hope and comfort that even at the tragic end, Luke is exactly where he wants to be.

As much as we may not want to, Nauffts forces us to look inward — and examine our own feelings about death and other uncomfortable topics.