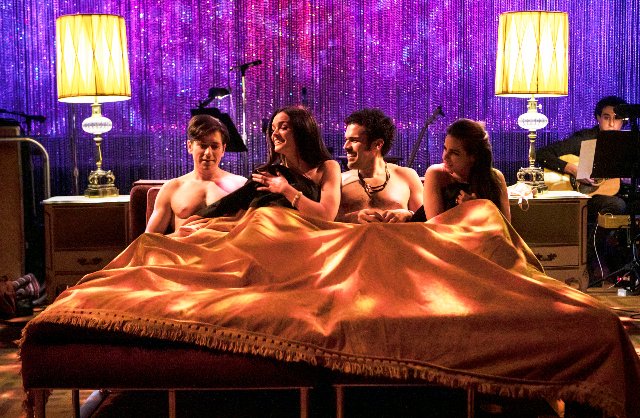 Surprise of all surprises, the 1969 movie “Bob & Carol & Ted & Alice,” thanks to The New Group and Pershing Square Signature Center, is back in the news again—this time, not as a film but as a play with music. Cleverly directed by Scott Elliott, from a book by Jonathan Marc Sherman, the musical has dialogue and locations nearly identical to those in the film.

Though some fifty years have flown by, I remember seeing Paul Mazursky’s film when it first opened. I also remember that it starred Robert Culp, Elliot Gould (Barbra Streisand’s husband at the time), Dyan Cannon (the recently divorced wife of Cary Grant), and the ill-fated Natalie Wood.

With a sexy (for the late sixties) ad campaign depicting all four characters in bed, a headline that read “Consider the Possibilities” – some newspapers would not run this ad – and a titillating R-rated story which dealt with infidelity and wife swapping, the movie—the number 5 moneymaking hit of the year—rang up some 31 million dollars at the box office.

The picture garnered 4 Oscar nominations, with Gould and Cannon nominated in the Best Supporting Actor and Actress category, while the film got nods for Cinematography and Original Screenplay. Despite all the hullabaloo, nobody took home an Oscar that night.

To add a bit of perspective, and a wee whiff of the times, “Butch Cassidy and The Sundance Kid,” the number-one hit of 1969 thanks to the star-powering good looks of Newman and Redford, brought in some 102 million.

To compare and contrast B & C & T & A the play with the film (something I always do with a play that has its beginning on screen), I watched the flick online. Not surprisingly, considering how far we have come during the past fifty years, I found the film dated, mostly boring, and not at all sexy.

The most enjoyable part of the play, which offers a respite from the still-dated story, is the addition of the beautifully voiced, band-backed, guitar-strumming singer Suzanne Vega. Delivering most of Duncan Sheik’s and Amanda Green’s fourteen Burt Bacharach-like, sweet-sounding songs. Vega occasionally leaves the band, which was situated at the rear of the set, to play a bartender, a tennis pro, and a shrink.

The most fun, as strange as this sounds, is in watching the actors change the configuration of the furniture (e.g., a couch that turns into a bed), as the play’s locations move from the retreat, to Bob’s and Carole’s home, to a restaurant, and eventually to a Las Vegas Hotel.

Both the play and film open with documentary filmmaker Bob (Joél Pérez} and his wife Carol (Jennifer Damiano), both somewhere in their thirties, attending an Esalen-type retreat in Big Sur where emotional honesty is encouraged. Also, on the menu at this retreat is an around-the-clock regimen of Tai Chi, meditation, Rolfing, consciousness raising, and primal screaming therapy, the latter of which gets Carol screaming.

Upon returning to their upscale Los Angeles digs, feeling newly enlightened, Bob and Carol begin to apply the retreat’s principles of free love and complete openness to their marriage. Wanting to share their new-found wisdom with best friends Ted (Michael Zegen) and Alice (Ana Nogueira), they encourage them to loosen up and come to grips with their true feelings.

For Bob, spouting the retreat’s mantra, this means that everyone should “feel” their emotions rather than intellectualizing them. As scared as Ted’s and Alice’s feelings are about Bob’s and Carol’s new-age ideas, they are also, as they sing, “terrified of missing out” on the action.

During the course of the play, we follow the couples as they examine their so-called true feelings within their marriages, as well as  friendships with each other. Of course, sex enters, somewhat unexpectedly, into the picture with a couple of one-night stands for three of the four, all of whose details are heatedly discussed, albeit innocently, among the group.

The highlight of the play is a trip to Las Vegas, ostensibly to see Tony Bennett perform. It is here that both couples, in the same bed, nude and under the sheets, contemplate making love with each other’s spouse. The original film script did not indicate if the couples had sex or not. However, I did read that Mazursky wanted the actors to improvise the scene. While Culp, it is said, was ready to go all the way, the other three actors, led by Wood, decided against that. Such ambivalence, as one critic noted, “nicely permeates the film’s conclusion,” as it does for the play.