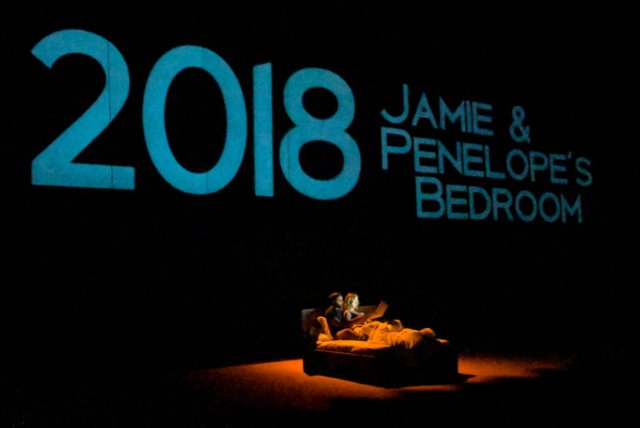 In recent times, American society has become increasingly bifurcated. With political polarization, rigidity is so pronounced that those who don’t adhere exclusively to the “party line” are considered turncoats. So it is with the sweep of the #MeToo movement, in which any accusation of sexual infraction in the workplace is assumed by women’s advocates to be truthful. And we are besieged with cases in the real world and in thought-provoking fiction that reinforce the breadth and seriousness of these issues. Against this backdrop of black and white, perpetrator and victim, playwright Kate Cortesi offers a provocative and stimulating world premiere play, Love, which humanizes the parties involved and explores the complexities of relationships that many depictions often simplify to the point of distortion.

Structurally, the play rocks back and forth energetically among several time periods, up to 15 years apart. High-powered Penelope had taken a gap year with a small, low-pressure New York City agency headed by Otis, an engaging manager. They would become close friends and lovers and remain close through the years. But a dozen years after leaving the agency, “Pen” is contacted by several other women who had worked at the agency. They want to go public with their stories of sexual abuse. Unbeknownst to Pen, each had sexual relationships with Otis. Two initiators of the action need a third corroborator for the story to see the light, and Pen is in the hot seat.

Unlike the dogma-driven idealist, the playwright recognizes that life is messy. Although predation clearly exists, for every egregious Harvey Weinstein or Bill Cosby, there may be many Al Frankens who get torn down in the frenzy. And should sophomoric pranks (wherever that definitional line is drawn) receive career and family destroying public condemnation? What about consensual relationships even if they exist within an organizational chain of command? Of course, that begs the question, what is consensual?

Although Otis’s sex drive and activities are undisputed, did his actions qualify as sexual predation? When Penelope first meets Vee, who would become one of the accusers, the latter waxes on that Pen should be prepared for heavy drinking and partying in the agency environs, suggesting that Vee is kind of a good-time girl who is in the right place. Did Otis impose his will on Pen, Vee, and others, using the power of his office, or was he simply a successful romancer who women fell for? Did some of the women seek out the sex? And what is the motivation of the accusers? Are they physically harmed? Psychologically hurt? Embarrassed in retrospect? Vengeful? Opportunistic? And what about the accuracy of the memory of things that happened a dozen years before? Aren’t our remembrances colored by intervening time and events? And if the women’s stories make the media, will they reflect the reality?

Cortesi’s Otis is aptly depicted by R. Ward Duffy who conveys the character’s vitality and confidence along with his compassion and consideration. He is also credible as he faces the possibility of his world falling apart. All the accusers note that the kids that the agency serves love Otis and that he seems to be a great father as well. And he has supported the accusers in different ways over time. Do these things count? Do you get to offset demerits with good deeds?

The central character in the puzzle is Penelope, and Clea Alsip nails her every trait – from bright to breezy and from ambivalent to decisive. But one incident has imprinted Pen’s life, and it concerns truthfulness. Because of an experience she suffered, she finds herself virtually powerless to stray from what she calls the truth. But what is the truth? An assemblage of facts or some greater concept? Is being silent inconsistent with being truthful? And what are the risks of revealing things that happened years ago that may not be remembered with total accuracy?

Cortesi constantly confronts the audience with the complexities of life. Especially, she challenges us to abandon the notion that women who engage in sexual relationships in the workplace must be victims or sluts, without a full range of agency. The questioning she provokes seems almost endless, and she does it in a riveting and entertaining manner. Love is much more than its four-letter title would suggest.

Love, written by Kate Cortesi is a world premiere produced by Marin Theatre Company and plays on their stage at 397 Miller Ave., Mill Valley, CA through March 29, 2020.