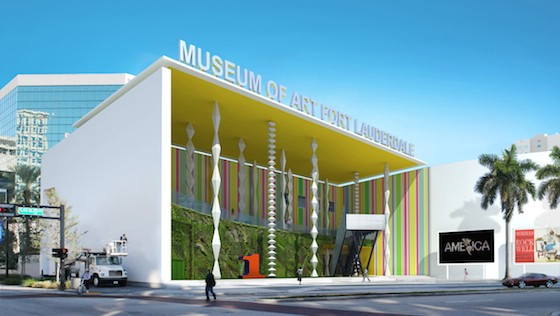 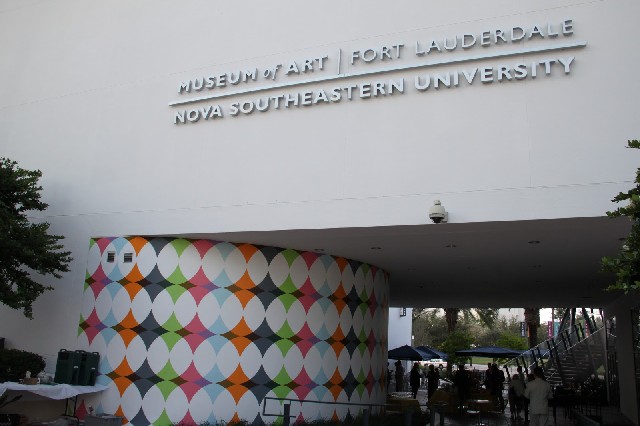 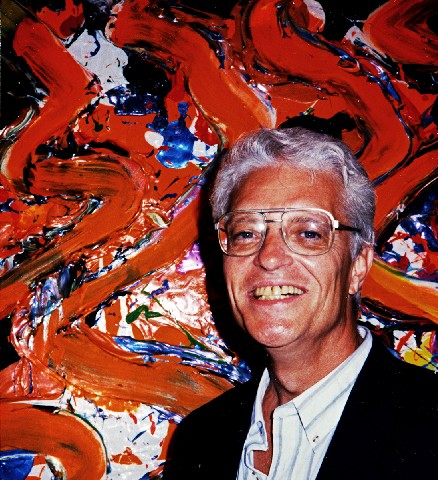 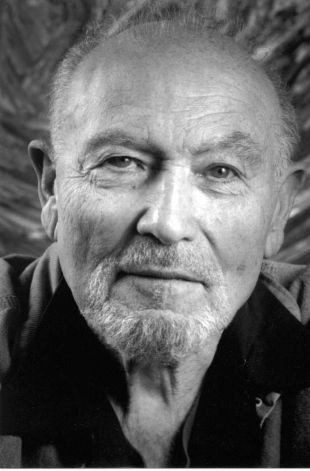 Charles Giuliano How long were you director of the Ft. Lauderdale Museum?

KM That was great. It was always wonderful to have visitors from the North. Especially in Ft. Lauderdale where you could feel a little out of it. I used to go to Palm Beach all the time.

CG That was a nice museum.

KM It was a beautiful museum. It was an Edward Larrabee Barnes building. It was a fabulous building. For showing art? You couldn't get better than that for a museum that size.

CG You had an eclectic program.

KM Oh yeah. First or all they had a three or four million dollar debt. To pay down the debt I had to keep the thing going. It's very seasonal. In January and February we got lots of people in. There were curators to do things that I wasn't particularly enthusiastic about. But I could get these curators to do it so it was perfect. It was successful. I paid down the debt.

CG As I recall they have a good CoBrA collection.

KM They do. A collector from Miami donated it. When I got there nobody related to it. All the board members made fun of it. They thought it was silly and stupid. These people were very hard to work with.

CG CoBrA was a respected movement.

KM Oh yeah. Jorn is great. Appel I like a lot of them. Carl-Henning Pedersen the Danish artist.

(CoBRA was formed by Karel Appel, Constant, Corneille, Christian Dotremont, Asger Jorn, and Joseph Noiret on 8 November 1948 in the Café Notre-Dame, Paris, with the signing of a manifesto, "La Cause Était Entendue" ("The Case Was Settled"),[2] drawn up by Dotremont. Formed with a unifying doctrine of complete freedom of colour and form, as well as antipathy towards Surrealism, the artists also shared an interest in Marxism as well as modernism.)

It was an important focus of the collection but the context to them seemed to be from the moon.

CG It was mostly prints.

KM No there were a lot of canvases. It may have mostly been paper but there were a good number of paintings. But, as I say, nobody was interested in it. There were dedicated galleries for it and we changed them every so often. There was quite a bit of inventory.

CG When did you leave?

CG From then to now was that your last gig? Are you still working?

KM After that I worked at the Museum of Contemporary Art in Denver for a year. I was director. They didn't have a space at that point. I was trying to keep the whole thing going. It's a whole story. I got them into a space and started. Now they've built a building and it's going great. I kept them going during that year. Basically I prevented them from committing hari-kari.

CG What about the Clifford Still Museum?

KM That operation opened after I left. I've never been there.

CG Looking at your website you're operating the New New Art Museum in your home by appointment.

KM I wouldn't call it a museum but it's a gallery. People who are interested in this kind of painting come from all over the world. Mostly artists. They come and we're creating this network.

CG Are you working on exhibitions and publications?

KM I did a show last year at Sideshow Gallery in Williamsburg. It's a very well known gallery. I did a show of Roy Lerner and Peter G. Ray. There's articles on both of these people on my site. I did the Armory Show with the New New Painters.

CG So what's coming up?

KM I don't have a show coming up at the moment. I'm working on a piece on Pollock which I've been working on for a long time. I'm hoping to put that up soon., I write for the website and put up four or five pieces at a time. It's more efficient.

CG I get the feeling that writing is a slow process for you.

KM Exactly. Of course I don't have a lot of time. There are days I can do something and then there are two or three weeks when I can't do anything with it. So it does take me a long time. I still have the enthusiasm to do it.

CG You did the Abrams book on Noland.

KM The paintings and the sculpture. There's a piece about Olitski on my site. I discuss my relationship over the years and a lot of things that went on. Of course I knew Jules very well and stayed at his place many times. We go back years and years. Altercations here and there. Jules was a mensch and a good person. He had a massive ego like most of us in this game. You ran up against that from time to time.

CG I get the feeling that some of those guys were rough characters. Alcoholism was a factor. It was certainly critical to Pollock and de Kooning. As well as Olitski and Greenberg.

KM Absolutely. Clem (Greenberg) Jules (Olitski) Larry (Poons). Serious alcoholics. I went through a lot of that. I myself have never been. No.

CG How did it impact your relationships?

KM Well. (exasperated) Clem, in the end he emptied out a bit. Maybe it was from all the drinking. Anyway. He did. Those last years he wasn't too sharp. Anymore. In the 1980s he wasn't too sharp anymore. He and Jules would go at it. Man. Clem would get falling down drunk where Jules would just get slower. Jules got slower but he kept the same pace. Tony none of the others had that but Jules had that.

CG I had that slowing down experience with him. When you did the sculpture show at the MFA I did an interview with Olitski for the Phoenix. Ken Baker wrote the review.

When I arrived at his suite at the Ritz the shades were drawn and the room was softly lit. As we settled in he said that he was calling room service and would I like something. They sent up a pot of coffee for me and for Jules a fifth of Johnnie Walker Black Label scotch.

During our conversation I drank coffee and he polished off the bottle of scotch. He told me about living on the GI Bill as an art student in Paris. He asked friends for the cheapest and most nourishing food. For a year he loved on sacks of peanuts and coffee.

I have often thought of that as an analogy for artists who endure youthful poverty then great fame later in life. Is there psychological damage that resulted in that alcoholism. It's as if the fame and fortune are somehow not able to balance that early misery. Later at the opening he was drinking more scotch. As you say slowed down but still standing.

KM (In Paris) That's when he was doing the blindfold paintings. He has a lot of background so when he was in Paris he wanted to break away from that. To somehow get away from all that learning. It all came back. But that's what he did. He was influenced by the CoBrA people. And Dubuffet. Anyway he was living in Paris and knew what was going on in France. He started out that way and the early pictures that he did were very much like what was coming out of Europe in the late 1950s.

CG There was a time in the late 1960s and 1970s when I was traveling mostly trips to Palm Beach each season to drive my mother home to Gloucester. We turned them into adventures and I got the plan the itinerary. We got to visit interesting historical sites cities and museums. It seemed that all of the museums had at least some contemporary galleries or lobbies. The collections often featured the same artists largely reflecting Greenbergian taste which then dominated the art world. There was a sameness about seeing that favored group of artists. Of course today that's no longer true and one encounters relatively little color field painting. There has been a critical reversal.

KM People say that but (Jasper) Johns got a lot of attention right from the get go. So it (Greenbergian taste) was never totally dominant. Already by the mid 1960s the Pop phenomenon was demanding more attention.

(The first Warhol museum level exhibition was organized by Sue Thurman for the ICA in New England Life Hall on Newbury Street in the 1960s. Warhol was represented at the opening by a body double. She also showed Barney's Beanery by Edward Kienholz and American Paintings from the Montréal World's Fair at Horticulture Hall. I reviewed that exhibition for Arts Magazine.)

(When Robert and Ethel Scull divorced the pop collection was sold with considerable capital gain which provoked protests from the artists.)

That's an indicator of where taste was going,

CG Clearly there was a massive paradigm shift.

CG Earlier I described the rebellion of pop as oedipal. It represented a need to kill the hegemony of abstract expressionism. There was a similar development in critical thinking. There was a need to move past the dominance of (Harold) Rosenberg and Clement Greenberg.

In an essay you raise the question "Could Greenberg have been wrong for forty years?" Other than the abstract expressionists many of the artists he championed have become marginalized. You were a part of that shift in mainstream critical thinking. There was an earthquake.

But as regards museums, the public and all of that, yes, you're absolutely right. The Warhol effect as I call it. I didn't make that up. It's been said before.

It's all changed. The art world is so huge today. Today with all the art fairs and biennials, museums going up all over. Private museums. The bigger the art world becomes the slower it tends to move.

CG When young people go to graduate school or art school today they expect to be a part of the action. When we got into this business there was no action. It was a calling.

KM You're absolutely right. Not just a paradigm shift today it's exponential. It's unimaginably huge.