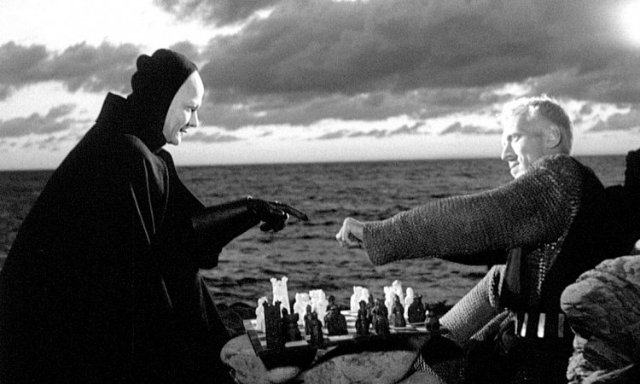 It was an opportunity to revisit a classic film after many years. On many levels it is ever more timely and relevant. The lead actor, Max von Sydow, passed away after a long and celebrated career. Obituaries cite him as among the leading actors of his generation.

The theme of the film, set in the middle ages during the plague called Black Death, has uncanny resemblance to the current global pandemic. Now, as it was in medieval times, there is no vaccine or cure for the contagious disease.

Social distancing, hand washing, sanitation, and quarantine are changing our daily lives. All of this is voluntary and does not allow for the behavior of others.

There is nothing new in this. The word quarantine has an interesting etymology. During a time of epidemics cargo arriving in Venice was restricted from being unloaded for thirty days, or a month. That was expanded to forty days or quarante in Italian. From which came quarantine.

The theme of plague has been a constant in the arts. It is an element in apocalyptical literature and art. In the Bergman film we see an artist creating just such a decoration in a small Danish church. It is the inspiration of horrific details of Michelangelo’s Last Judgement in the Sistine Chapel or details of the Garden of Earthly Delights in the triptych by Bosch in the Prado.

Who has not been chilled by Poe’s short story “Mask of the Red Death.” Less widely read is Herman Hesse’s “Narcissus und Goldmund” which is set during plague in the 13th century.

I was a teenager when I saw Seventh Seal and other Bergman films at the Brattle Theatre in Cambridge. The experience was riveting then and now, perhaps less so on TCM. It is always fascinating to reevaluate aesthetic experiences that have lingered with us for decades. Those, stark, austere, chilling Bergman films were primal experiences of setting my aesthetic bearings and moral compass.

With time and critical distance we are more capable of seeing lapses, tropes and devices in works of art. Even masters like Bergman must hold up to the test of time. There are passages of the film that now seem slow and contrived.

But the central riveting image of the knight (Von Sydow) playing chess, gambling for his life, with death (Bengt Ekerot) remain primal and indelible. Eons will not wash away or diminish its power as image and metaphor.

As an actor Von Sydow went on to create some 200 performances archived as film and television. In an era barraged by race and gender identity he endures as tall, stark, Scandinavian, chiseled, masculine and stoic. He may be a paradigm of everything that currently is not. There is no need to ask what pronoun he answers to and why he is such an enduring paradigm. He is on that shortest list of actors who always created superb characters and performances. What occasionally diminished was the quality of work he was inserted into.

After initial resistance he was lured to the big bucks of Hollywood. There were commercial ventures that dimmed his aura.

That’s never in question in numerous films with Bergman. Von Sydow was a leading man in the filmmakers repertory company. Through the sequence of films it was intriguing to experience how Bergman drew upon such gifted and reliable actors. They were always at their best when he was behind the camera.

Recalling the 1957 film provides bookends, then and now, imagined and real. In a theatre one could vividly imagine a medieval plague. There was the safe distance of art. It was an aesthetic experience. Thoughts of plague and pandemic are now more horrific and palpable as we catch the latest bad news on CNN.

There is an odd aesthetic as we experience the surrealism of a grim President Trump delivering a brief address to the American people. Or fending off the media in a orchestrated dog and pony show. No doubt these deranged and ego driven moments will be documented in books and all aspect of art comprising theatre of the absurd.

In time of such stress and uncertainty the macabre is the stuff of art. We have just finished viewing the third season of the grim and fascinating German series Berlin Babylon on Netflix. The drama is set in the time frame of the end of the Weimar Republic. With hindsight it is all too evident that it conveys a dramatic overview of the how and why of the rise of National Socialism.

Intended or not one may all too readily see connections to the rise of intolerance, xenophobia, suppression of free speech and democracy that is a palpable part of the daily news cycle.

Is this the end of another Weimar Republic? In a time of pandemic and autocracy  are we living the last days of an American Republic? This past week has seen the end of the long bull market. Trump says that he is not concerned. Nor was Herbert Hoover. The rest, as they say, is history. Which as we know all too well repeats itself.

All we can do right now is stock up on essentials, hunker down, wash our hands and watch Netflix. Along with sports, theatre, restaurants, travel and hospitality don’t be surprised if, in the face of a national emergency and the safety of the American people, the 2020 elections may be cancelled.

In the Book of Revelations it is stated that “And when the lamb had opened the seventh seal, there was silence in heaven about the space of half an hour.” Starting now.