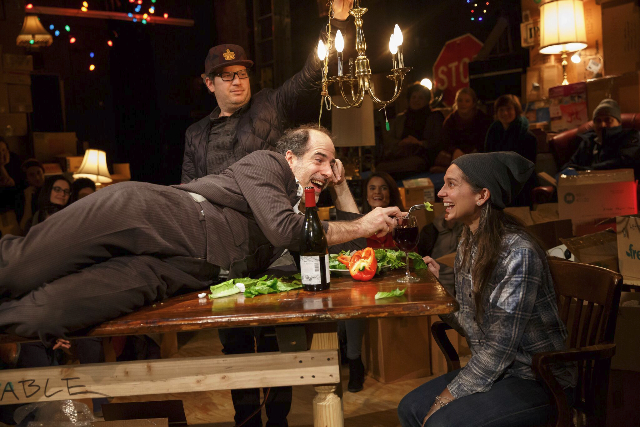 The New York Theater Workshop, one of the most audacious theaters in the city, never fails to astonish its audience in the wide-ranging fare  it  presents, its  gonzo directors and actors, and stunning production designs. I’m talking about set, lighting, sound, costume, and film. It can be said that visual and audio surprises – you never know what is going to hit you between your eyes and ears upon entering the theater – is a feature of the unique company.

The Object Lesson, the current production (through March 19, 2017), features set designer Steven Dufala’s over-the-top hoarder’s dream of an installation consisting of a small, mountain-like range of cartons. It rivals the overstuffed home of the infamous Collyer Brothers who were found dead side by side under tons of junk in their Harlem mansion in 1947.

The Object Lesson begins, even before its creator and solo performer Geoff Sobelle makes an appearance, when we enter the theater. Here we are given a sheet of paper instructing us to open and examine the boxes (and there are hundreds of them) that line the walls. Some are actually stacked to the ceiling, while others liberally cover the theatre’s entire floor. We are told that it doesn’t matter whether you sit, stand, or lie down, as long as you are mindful of the people around you.

Following orders, in the first box that I opened, I found a book. In another box, a doll. In the third box,  a hat with a note asking me to give the hat to another person and tell them that it was meant for them. I passed it on to a person close by who in turn handed it to another. Everybody was doing the same — opening boxes, reading notes, examining the contents, and following the instructions.

Losing interest in this “game,” or, more to the point, not wanting to end up sitting on a backless box for two hours in a darkened, cavernous space rubbing shoulders with the person next to us, we quickly worked our way to one of the only two couches available. As luck would have it, the couch was on a raised platform which allowed us an unobstructed view of the proceedings. From our perch, the picking and looking scene below resembled the floor of Macy’s during a Christmas sale.

What followed, in the dimly lit theater, in and about a continually moving audience that had to make way for Sobelle as he traversed a sea of countless cartons. We experienced an ingenious mixture of autobiographical, object-triggered storytelling reminiscent Garrison Keillor spinning one of his tales, a number of magical feats. There was a series of vignettes all performed by Sobelle with an occasional audience member in tow. Every time he opened a new box, Sobelle found an object and/or a letter evoking another story.

The performance starts with Sobelle sitting in a leather easy chair, surrounded by side tables, lamps, an antique Victrola, and a telephone. All of which he pulls out of various cartons in order to create a home-like atmosphere for himself. Seemingly agitated, he is having a strange and almost unintelligible conversation in which the audience is privy to his side only. Later on, an audience member (in the case a woman, obviously supplied with a text) makes sense out of nonsense by cleverly completing this dialogue while reciting her side of the conversation.

In another vignette, again selecting a woman from the audience, Sobelle, wanting to rekindle a past romance that did not work out, unearths from the surrounding clutter of cartons, a table, food, utensils, candles, even a chandelier. The scene set, he prepares a meal complete with wine and a salad. Dancing on the top of the table, he chops the lettuce with blades of ice skates that he is wearing. At this same moment, just as unexpected as his ice-skate routine, wine and goat cheese is being passed around among audience members. A cinematic shower of white Styrofoam bits, standing in for roses, raining down upon the couple, ends this charming interlude.

In another scenario, Sobelle asks a woman and man, on opposite ends of the theater, to reveal all of the objects they are carrying in their purse or wallet. Their trial was to decide the most and least valuable items. I totally forgot what both they answered. But I do remember having to think twice about what I was carrying in my pockets. I also thought about my 82 boxes in storage and all of the hundreds of objects that inhabit every shelf, table top, and drawer in my apartment, each one harboring past memories that I have collected over the years. I may go quietly into the night, but my objects will go screaming to a new home.