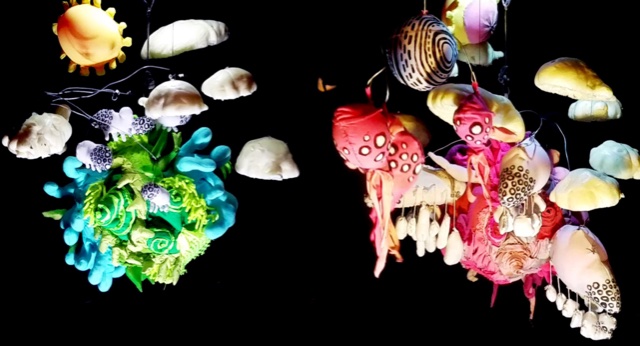 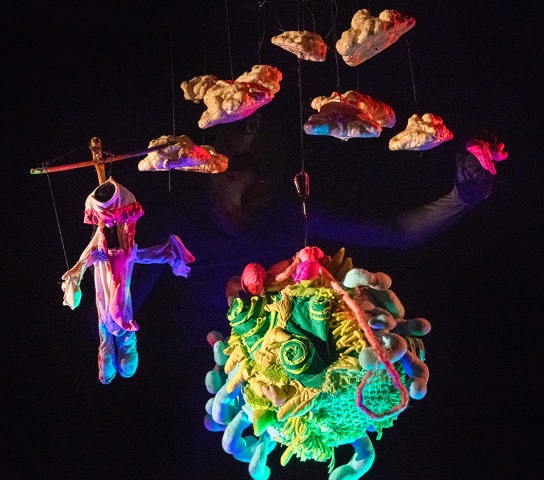 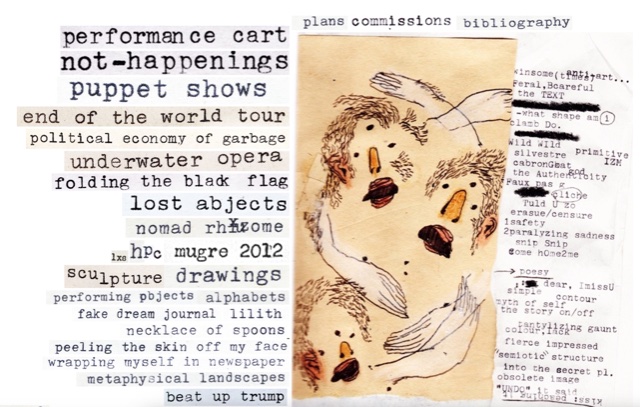 Basil Twist is head of puppetry for HERE, a very special downtown performance space in New York. Symphonie Fantastique is one of Twist’s enduring works. A 1,000 gallon tank filed with water is the dance stage for feathers and silks manipulated by six puppeteers. The slithering, waving objects rock to Hector Berioz’ music.

Twist well knows the challenges faced by artists as they adopt the puppeteering craft. One question always arises as puppet artists set about creating a new work.  What can I do that no one else has done before me?

Kalan Sherrard caught Twists’s attention performing on a New York subway platform. Kosmos Invers demanded his attention when it was performed at an international Puppetry festival.  A soft, colorful mop-like globe seems immediately like coral. Creatures nestle in it, grazing and gorging.  The repeated words ‘Inter-Mission’, ‘Inter-Mission” (there is none in this production), set us into outer space. This Kosmos is the world below and the world way out there.  We have a powerful feeling of infinity as we are being cast into a carnaval space.

The central sphere resmbles a mop's head.  Depending on the lights, it can be colored red and green and purple. Pigs, an elephant who strongly resembles Mo Willems’, two classic rubber dolls, and a busty woman bounce before us.

Kalan describes his work: “xE has been making Not-Happenings, Installations, and Puppet Shows in galleries, squats, and public street gutters around the Americas and Europe for the greater part of a decade, and offers periodic courses on Ontological Nihilist Anarchism and UnBeing, Misunderstanding [Human] Texts, and Breaking Garbage." Kalan is a designer of Anti-Fascist Fashion, a physicist and anti-philosopher, a builder and de-constructer of monuments, and has been known to sell impossible objects with uncanny properties to others animals.

Heavy duty text is sometimes clear.  Often it trails off into a torrent of strange sounds, glitteringly incomprehensible.  Demotic, onamatapoeic gibberish clarified by the movement of multiple puppets. Oddly the space of Kosmos is one we recognize. As far out as we are taken, it is intimate.

If the creator has been wacky, his conclusion, naked before us, trying to either revive or end a very small puppet’s existence, shows him into a big person with a perfectly lovely singing voice.  For sheer electricity and brazen provocation, Sherrard can’t be beaten. Except by the puppets he has created.

The sound track is a miracle of bustling continuity made up of growls and grunts. Ron Shalom, sound designer, is a member of the Daxophone Consort, a composers' collective, and erstwhile director of the Cult of the Illuminated Orifice, an interventionist performance troupe. In partnering with Sherrard, he has clearly adopted Sherrard’s modalities.

Concern about meaning drops away as the evening progresses. The morning after, you are left with visions of colorful galaxies dancing in your head.